Franco-Ontarian teachers join the strike: Here's what is at stake for them 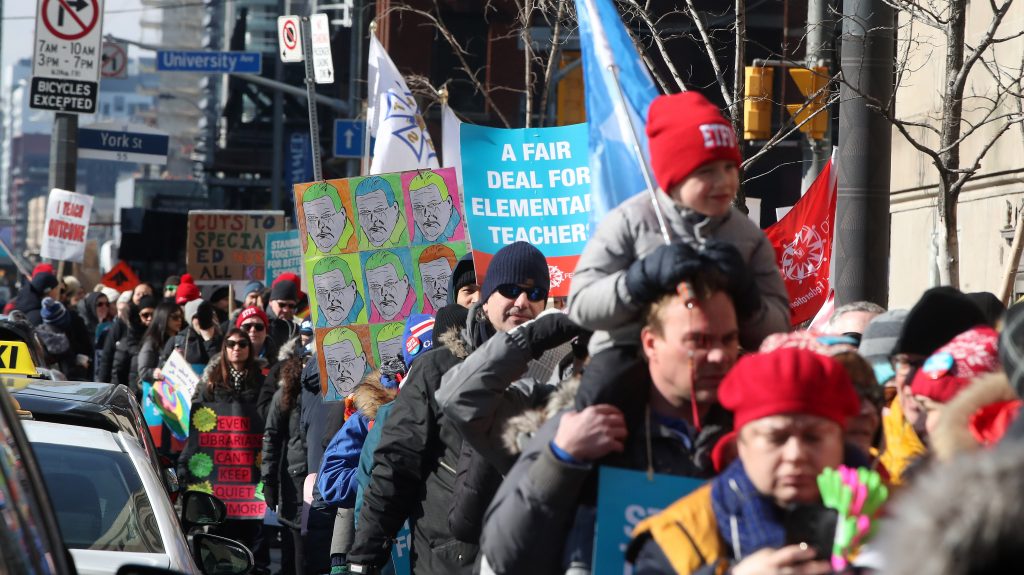 The Association des enseignants et des enseignants franco-ontariens (AEFO) represents French-language elementary and secondary teachers across Ontario. Last December, 97 per cent of AEFO's members voted in support of strike action. In January, they initiated work-to-rule action. This week they are holding a one-day strike. Next week they will join the other three major education unions in a province-wide shutdown of Ontario's schools.

What is at stake for francophone schools? The same as for other schools, but with some particularities.

In an earlier blog, we looked at total operating funding (prior to capital adjustments) for all school boards, comparing funding received for the 2017-2018 school year with estimates for the 2019-2020 school year. The comparison is adjusted for inflation; per-student calculations use estimated enrollment figures available in August of 2019. While total average funding per student dropped by $375 province-wide, the average reduction per pupil in francophone boards was $521. At this point, amidst various funding changes, it is hard to pinpoint why this average is higher. One possibility is that francophone schools have been struck hard by the slashing of the Learning Opportunities Grant (more on this below).

In another blog, we estimated the board-by-board impact of larger class sizes and mandatory e-learning. Last March, the Ontario government announced that class sizes in Grades 4 to 8 would increase from 23.84 students per teacher to 24.50; class sizes in high school (Grades 9 to 12) would go from 22 students to 28. The plan also requires high school students to earn four (out of 30) credits online instead of in the classroom. In November, the Minister of Education announced that two instead of four online credits will be required. The table below shows how many teaching positions would be eliminated in francophone school boards by 2023-24, the year these changes are expected to be fully implemented.

Every board and every school have unique challenges given their locations, the socioeconomic and demographic make-up of their student bodies, and a number of other factors. For francophone school boards, what seems to stand out is the rapid enrolment growth that can’t be explained by natural population growth.

A recent Office of the French Language Services Commissioner report shows that the proportion of Francophones in Ontario has decreased between 2011 and 2016, and it is expected to continue to fall. Increasingly, the report argues, the growth of this population will depend on immigration. As a result, the school population of francophone schools is likely to become increasingly diverse, which brings great advantages for the school community as a whole, but also some funding pressure as newcomer students usually require settlement support.

The second driver of enrolment growth seems to be children who don't speak French at home. While the high demand for French immersion programs is well documented, the reality is that these programs don't absorb all the non-French speaking families interested in French-language instruction. A portion of these families can choose to enrol their children in French boards. In practice then, francophone schools welcome students with a  broad range of French-language skills.

Increased interest in French-language instruction is a positive development towards strengthening bilingualism as well as knowledge and appreciation of Franco-Ontarian history and culture. But it also comes with funding pressures since teaching children in their second language—and one often not spoken at home—puts additional demands on teachers and schools.

Another relevant characteristic of the Franco-Ontarian population is that 21 per cent live in the northern regions, compared to 6 per cent of the total population.

With an increasingly diverse student body, a growing number of students that don't speak French at home, and the geographic and economic challenges faced by northern communities, francophone schools are likely to require more, not less, government support. Teachers and students across the province are being negatively impacted by the Ontario government’s policies and cuts; it is no different for Franco-Ontarians.