It’s not unreasonable to say that Canada has a youth employment crisis.

The employment rate for youth in January was at one of its lowest points since the start of the recession, at 50.6%[i]. That’s only 0.1% higher than it was two years ago and down by a tenth compared to pre-recession levels. The unemployment rate for youth is nearly 2-and-a-half times higher than non-youth[ii], and the “recovery” in youth unemployment can be attributed to the number of youth who have actually dropped out of the labour market because of the recession.

Flaherty is sympathetic to their situation and says he wants to help. In the budget speech, he said:

“Canada has one of the best-educated workforces in the world. … Still, getting that first job after finishing college or university can be challenging.”

According to the budget document, “too many Canadians graduate and find themselves unemployed or underemployed…[iii]”

In order to address this problem, the budget speech announced: “To help young people get the first, critical work experience they need, our Government will focus investment to support internships in high-demand fields and in small and medium-sized businesses[iv].”

It sounds like the federal government is going to try to help young people struggling to find employment. Unfortunately, when you look at the details proposed in the budget, it’s clear this is a measure for messaging, not a measures for result.

The government will be spending $70 million over the next two years to fund two internship programs, of which $30 million is a reallocation[v]. In essence, the government is committing to $20 million a year in new funding to this initiative. For comparison, the government has spent $473 million on Economic Action Plan ads[vi]: 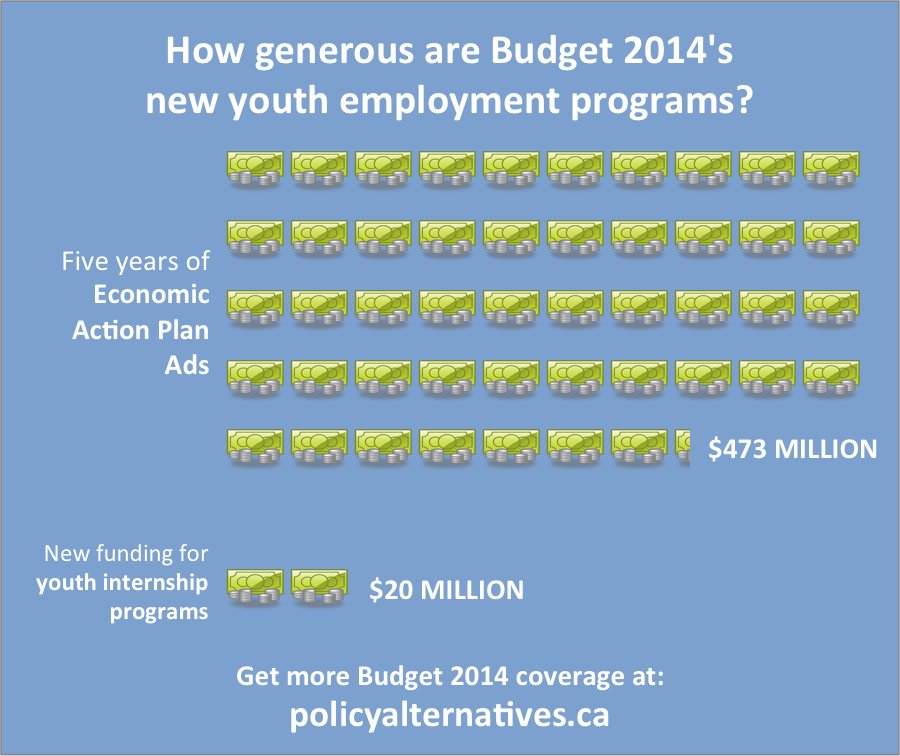 When you also consider the 100,000 to 300,000 estimated young people[vii] who are engaged in unpaid internships, it’s clear that this proposal addresses far less than 1% of the need.

For proposals that would go a long way in helping young workers, including banning unpaid internships to create more labour demand, creating wage subsidies for employers hiring youth and a stimulus program to boost the entire labour market, check out the Alternative Federal Budget.