You must be kidding: Confronting key myths about Quebec’s childcare system

Eighteen months into the federal government’s mandate, with several provincial elections approaching, child care is once again a topic of debate. And, inevitably, Quebec’s system of providing and paying for child care (European-inspired and unique in North America) comes up in the discussion. While Quebec’s program is by no means perfect, it is easily the most advanced in the country. Unfortunately, it is also the target of misinformation about how the program is paid for, what it contributes, who it serves, and how children and their families benefit. This post is based on University of Quebec at Montreal economist Pierre Fortin’s detailed refutation of a number of these myths about Quebec’s childcare system.

Myth #1: The costs of Quebec’s childcare program have been explosive. 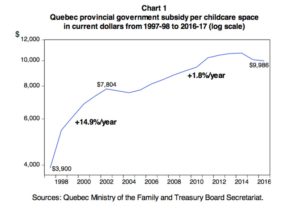 From 2001-2016, wages of childcare workers increased in line with the provincial economy’s average: 2.3% per year. Following the 2008 extension of unionization to family-based childcare workers, there was a large once-over wage increase for this group in 2011 which cost a relatively modest $147 million.

In sum, the total cost of direct and indirect subsidies to reduced-fee types of childcare in 2016-2017 would be close to $2.5 billion, about 0.6% of Quebec’s gross domestic product (GDP), and roughly equal to the current OECD average for the share of GDP that governments of member countries allocate to early childhood education and care.

The unanimity of conclusions from multiple independent sources using two major longitudinal surveys conducted by Statistics Canada (1994-2008) constitutes compelling evidence that a significant share of the increase in Quebec mothers’ labour force participation since 1997 can indeed be attributed to the low-fee universal childcare system. We estimated that in 2008 there were some 70,000 (3.8%) more Quebec mothers in employment than there would have been without the childcare reform, accounting for about 60% of the increase in the employment rate of Quebec women 20-44 years from 1997-2008. 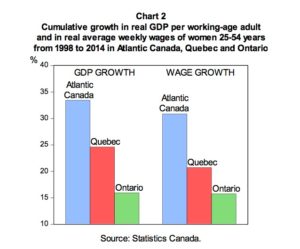 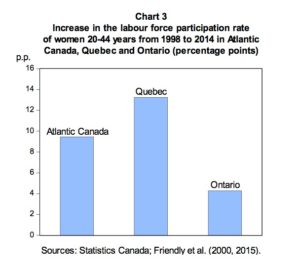 It would have therefore been natural to expect that the increase in the labour force participation rate of Quebec women would have been somewhere between the percentage increases for women in Atlantic Canada (four) and Ontario (nine)--but instead there was a 13 point surge. This constitutes fairly convincing evidence that Quebec’s childcare program exerted an important influence on maternal labour force participation.

Myth #3: The claim that Quebec’s childcare program “pays for itself” is unfounded.

Table 2 summarizes our final estimated impact of the childcare program on government revenue and expenditure in 2008.The two key results are (1) the total increase in revenue ($2,151M) exceeded the total increase in expenditure ($1,232M) by $919M, which meant that the program was “more than paying for itself”, and (2) the increase in fiscal balance was greater for the federal government ($673M) than for the province ($273M), given that the latter carried the entire cost of the program.

Myth #4: The impact of Quebec’s childcare program on child development outcomes has been negative.

The studies on which this myth is based do not—among other things—take the quality of centres into account, although the child development literature considers this to be the key factor. The high-performance early childhood centres’ (CPE) network has been demonstrated to deliver positive cognitive, health and behavioural results on average, and to be effective in reducing the vulnerability of children of all income classes, but it absorbs only 1/3 of children. The other 2/3 of children in licensed childcare receive services from family-based caregivers and for-profit garderies that are of minimal or inadequate quality on average—suggesting that child development has not improved on average since 1997. 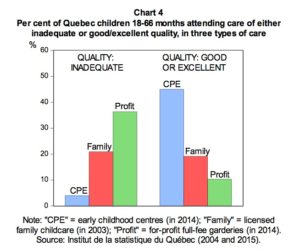 Thus, this is not an indication that a low-fee universal system is generally bad for child development, but a reminder that it can be bad if the average quality of services is substandard – a common-sense observation strongly supported in child development research. There is no doubt that the quality of services in Quebec’s particular system needs to be better managed. The challenge is to extend standards achieved by the CPE network to the rest of the childcare system--a shrewd use of the fiscal surplus generated by the program.

As well, even without considering quality, analysis of the National Longitudinal Survey of Children and Youth (NLSCY) survey by UQAM researchers (2015) found that the childcare program had some negative non-cognitive effects on children 0-4 years up to 2006, but these effects became smaller and eventually turned insignificant by 2008. Researchers speculated that the negative short-term effects until 2006 may have reflected not only the impact of childcare per se, but also the rapid deployment of a large-scale childcare network, which was completed by 2006.

Notably, based on the Quebec Longitudinal Survey of Child Development (QLSCD), 12-year-olds (grade 6) from low socioeconomic status families who had been in centre-based care (mostly CPEs in the sample) had cognitive outcomes that were (1) significantly better than if they had not attended CPEs, (2) even better if attendance had been intensive (around 40 hours/week), and (3) similar to those from adequate socioeconomic status families if the CPEs had been attended early (from 18 months old).Further analysis suggested that early participation in centre-based childcare can eliminate the social inequalities in academic performance at least up to early adolescence.

While licensed childcare is currently four times more affordable in Quebec than elsewhere in Canada, this median-based ratio obviously hides the fact that access to childcare services is unequal across income groups, in Quebec as elsewhere as Table 6 indicates.

Children from low-income families are less present than other children in good-quality licensed childcare for three reasons: (1) low-income parents are more often without jobs; (2) when they hold jobs, they use childcare less often; (3) when they use childcare, they wind up in lower-qualityfacilities more often.The low daily fee ($7.75 in 2017) may still be too expensive, or there may not be any good-quality childcare provider in their neighbourhood, or the mix of tax-transfer rules makes it financially more attractive for them to use lower-quality services.

A foremost difficulty is that disadvantaged children are hard to reach in the first place because half of them (49%) escape the childcare network (Table 6). Better access of disadvantaged children to good quality care should obviously be a top priority for the future development of every system, including Quebec’s.

A low-fee universal program has the potential for providing everything required to catch all vulnerable children and to finance better quality childcare services and the special needs of disadvantaged children at no net cost, and provides the benefits that are necessary to cover the costs. Compared to the non-universal targeted system, it is more effective because it does not leave out the majority of vulnerable children, and less costly because it generates fiscal revenue that can more than cover the additional system costs. 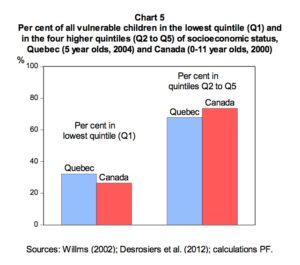 In addition, the presence of middle- and high-income parents in a low-fee childcare system helps establish and maintain good-quality childcare and prevents the stigma too often associated with “programs for the poor”. As Quebec’s low-fee universal childcare program has developed, access of college- and university-educated young families to the program has been key to whatever success it has achieved so far. For one, two-thirds of all vulnerable children in society are their children. For two, their participation in the program is a main reason that the response of the labour force participation of mothers has been so large, significant and persistent—such that the program more than pays for itself.

Pierre Fortin is a University of Quebec at Montreal economist, a fellow of the Royal Society of Canada, and a past president of the Canadian Economics Association. He can be reached at fortin.pierre@uqam.ca. His full paper, on which this blog is based, can be accessed (along with references) here.