While You Were Sleeping: Fed Policies Make It Easier to Hire a Cheaper You

A shorter version of this article appeared today in the Globe and Mail's Economy Lab Have you noticed how common it has become to talk about replacing workers with even cheaper workers? If you're looking over your shoulder, you're not paranoid; you're paying attention. There's probably a cheaper you out there.  And in Canada, the feds are helping your boss find them. This week, the International Labour Organization noted there are 50 million fewer jobs in the global economy than before the financial crisis began in 2008.  Some 200 million people are now looking for work, and many of them are on the move. Some have landed here. But with 1.4 million unemployed, many Canadians, too, are desperately seeking opportunity, and trying to avoid losing economic ground.  As manufacturers continue to decamp to low-wage climes, and the public sector sheds jobs, the job options are sliding down the income scale. There, the growing competition is pushing the pay floor lower and lower. Why? Canada, oddly, has welcomed newcomers in record numbers throughout a recession even as unemployment rates spiked. But our policies are shifting, and with it the type of labour market and society we are creating.  Today, the preferential nod is being given to a soaring number of temporary foreign workers, or "guest" workers. Make no mistake: These are people who are brought here at the pleasure of employers, and stay at the pleasure of employers. In 2011 156,000 economic immigrants entered Canada as permanent residents, while 191,000 people entered with a temporary work permit, granted to employers by the federal government.  Many of these permits extend beyond a year, so as of December 1 2011 there were over 300,111 temporary foreign workers employed in Canada, the highest number on record. The number of temporary foreign workers has more than doubled since 2006. 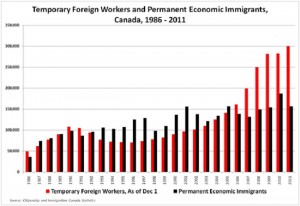 The federal government is promoting the temporary foreign worker program as a solution to skill shortages now faced by employers, particularly in the West. Yet 35 per cent of the nation's temporary foreign workers are in Ontario, and almost one in five (18 per cent) are in Toronto, which has an unemployment rate of 8.6 per cent. Labour shortage? I don’t think so.

Those numbers will soon rise. Last week, the federal government announced that employers could usher in high-skilled temporary workers like engineers and electricians in 10 days instead of the current 12-14 week approval process, noting this fast-tracking will likely be extended to other categories of temporary foreign workers.  But the fastest growing contingent of temporary foreign workers now are low-skilled workers, whose numbers have grown ten-fold in just five years. This category of temporary foreign workers are not the seasonal fruit-and-vegetable pickers that our nation also relies on.  Low-skilled temporary workers are the people who toil year-round at Tim Horton's and Canadian Tire, in our abattoirs, nursing homes and hotels, and any workplace where employers say they can't find Canadian workers willing to work at the offered wage rates.

Disturbingly, the federal announcement also set out new wage rules which permit employers to pay temporary foreign workers up to 15 per cent below the average paid for that type of work locally, sanctioning the creation of a two-tiered "us and them" labour market.

Even if such a rule were rigorously applied and monitored -- and budget cuts may eliminate the staff to do this job -- it guarantees a downward trend in wages for everyone.  Fifteen per cent below the average is a recipe for continuous decline when labour shortages are filled, as a matter of policy, by those who get paid less and are not allowed to stay long enough to ask for more.

Lower wages for most workers will not be an accidental, unintended result of this federal policy initiative.  Ottawa's recently announced reforms did not include a change in the four year cap on residency for temporary foreign workers, brought into play in 2011.  That rule guarantees two things: one, employers can minimize the costs of churn; and two, a permanently temporary class of workers is created, keeping wages and expectations low.

This latest twist in Canadian immigration policy accelerates the growth in income inequality which, left unchecked, can destabilize and disrupt the economy, society, and democratic institutions.

By positioning more temporary foreign workers as the fix for labour shortages -- a malaise that will only get worse in the coming years -- the federal government is assaulting deep-rooted values that have guided Canada's evolution as a society.

Even the Chinese railway workers of the 1800s came with "landed immigrant" status. Emphasizing the benefits of a disposable class of workers is a very recent, and unsavoury, development in our history.

This nation was built by immigrants who had a stake in its future.  Together we created an economy which today is the tenth largest in the world.  While the economy will continue to grow, the distribution of the gains from that growth threatens to become rapidly even more lopsided.  Policies like favouring temporary foreign workers over economic immigrants means the next generation of Canadians are all but assured to have a lower standard of living than the current generation of decision-makers have enjoyed their whole lives.

As an economist, I understand cheaper labour will benefit some employers in the short term, though the longer-term results will slow purchasing power and growth.

As a Canadian, I am appalled that public policy can be boiled down to this.  We are all cheapened as a result.