Where Icebergs are Born

Nearly all the icebergs in the North Atlantic start in this place.

Disko Bay, Greenland, is littered with ice as far as the eye can see. Huge icebergs sit somnolent in the morning sun, their surfaces lined with dark blue veins of frozen fresh water. A sudden clap of thunder announces the birth of a new fissure that presages the collapse of an eroded flank.

Humpback whales ride the surface nearby leisurely feeding, untroubled by the ship that cautiously approaches. The bow is lined with students, cameras in hand. They are with the 2013 Students on Ice Arctic Expedition. Their excited cries carry across the water as the whale surfaces and blows, then slowly slides under to the task at hand.

Once such a sighting would have had dire consequences for this massive sea mammal, which lives in all the world’s oceans. Nearby Disko Island bears the remains of a whaling station. Overhunting drove the whales to the brink of extinction, just as it did in many other parts of the Arctic. 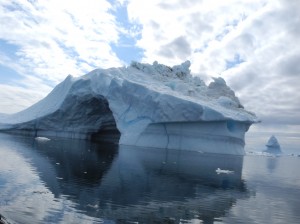 Today, there are other threats. A paper just released in Science reviews the latest research and looks at the threat melting sea ice poses to all parts of the Arctic ecosystem, from plankton up to large mammals like the Bowhead.

Whales are among the largest animals ever to inhabit the planet. Their existence rests on a complex food chain built on plankton, which according to the study produce 57% of all food in northern oceans. When sea ice melts, the habitat for plankton and algae shrinks, but so does the time when they grow and are available to the creatures that rely on them for survival.

In nearby Uummannaq Fjord, there must have been lots plankton because suddenly the surface was broken a spout of water. Then another and another. Five spouts in rapid succession reveal the feeding place of a pod of fins. As the morning wore on, we saw dozens of spouts all over the fjord.

The fins, the second largest living thing on the planet (after the Blue Whale) languidly strain the salty water for plankton and krill, small shrimp-like crustaceans that form the basis of the food chain. Krill are also eaten by smaller fish, which are eaten by larger fish and sea birds circling in the hundreds which soar and dip down into the water looking for the next meal. We leave them to their feast, marveling at the complex interrelationships at or below the surface.

It’s these relationships that are in danger, according to the study in Science. And it’s connected to the dramatic loss of multi-year sea ice which has been occurring over the last decade.

“Primary producers dependent on sea ice as their habitat underpin the entire marine food web of the Arctic,” the Globe and Mail quoted the study as saying. “The loss of over two million square kilometres of Arctic sea ice since the end of the last century represents a stunning loss of habitat.”

As we head further into Disko Bay, the approach to the community of Ilulissat is choked with ice -- from massive icebergs smaller growlers and “bergie bits” scattered across the ice surface. Next to Ilulissat, Greenland’s third largest community, is the Jacobshavn Ice Fjord, the nursery of all the ice we have been seeing. Human activity, which is warming the planet (and the Arctic at twice the global rate), is pushing more ice into the waters of the fjord.

Ice began retreating from this part of western Greenland at the end of the last Ice Age about 13,000 years ago. Since that time, the glacier has flowed down from the three-kilometre deep Greenland Ice Cap. In the last 150 years, it has retreated more than 50 kilometres. Two-fifths of the melting has happened since 2000. As well, last year saw melting over the entire surface of the Greenland Ice Cap for the first time. The changes are dramatic and beyond what climate models were able to predict just a few years ago.

Jacobshavn is an “ice stream,” one of the three biggest in Greenland. Immense pressure on the ice cap forces ice through the narrow fjord. The ice behind it moves more slowly but is eventually sucked into the stream, like water in a bathtub. As the temperature increases and more ice melts, water flows below the glacier and lubricates the rock it is moving over, increasing its velocity.

Disko Bay is an UNESCO World Heritage Site and is the reason thousands of people come to Ilulissat. Tourism is important to the Greenland economy and the icebergs in Disko Bay are a major attraction. However, at the rate the ice is flowing out, in 20-30 years the glacier will no longer calve into the water but will melt unspectacularly on the land. What will happen to the UNESCO designation? Will tourists still come? What will happen to the local economy?

These questions seem out of place when you look at the massive, almost incomprehensible amount of ice in the fjord. Bergs the size of overturned skyscrapers rest in mass of broken ice. The sun gleams off their surfaces and, looking over the fjord from an ancient granite ridge in the UNESCO site, the students are tiny silhouettes, barely visible agains the white and blue background.

If we’ve learned anything about Arctic climate change in the last few years, it’s that what were once seen as impossible rates of change are only too real. Models that were state of the art just a few years ago are out of date. The students are overwhelmed by the site and sobered by the realization that their’s may be the last generation to marvel at the spectacle at Disko Bay.

John Crump is a CCPA research associate. He recently returned from his fourth Arctic expedition with Students on Ice.