Where are all the women (candidates)? 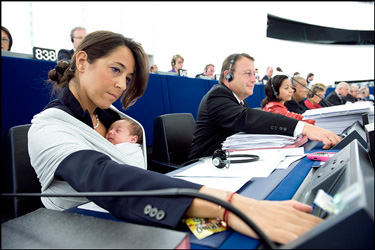 A number of cities across Canada are gearing up for municipal elections. As the field of candidates becomes clear it is also becoming obvious that there is a serious gap in the numbers of men and women running for office. It seemed like a good time to ask: why don’t more women run for office?

Being a mayor or a city councillor is a job. More than that, it is a job that demands long hours on an irregular schedule. For women with young children and dependent family members, this poses exactly the same challenge that any other demanding job poses. Women still perform double the number of hours of unpaid childcare work as do men, they are three times as likely to take time off from work for family reasons and they are more than ten times as likely to cite childcare as a reason for not working full time. Even if you can manage a full time schedule and find a childcare spot, there’s still the problem of what to do when there’s a council session that runs until 11pm or a community consultation on a Sunday.

Study after study demonstrates that, as a society, we don’t always respond favourably to women stepping into public leadership roles. Female politicians, in particular, are often portrayed as overly aggressive (think the Time Magazine cover of Hillary Clinton as a giant high heel stomping on a tiny helpless man). At the same time, female politicians are subjected to questions about their hair and clothes that have no parallel in interviews with male politicians. Or they get what Politico recently referred to as “the princess treatment”—all hair and no policy.

3. It’s dangerous out there

From the time they are teenagers, girls are subject to harassment in public. That’s a lesson young women are learning about the risk of being in public.

And it’s an accurate lesson.

The past year has been filled with accounts of female bloggers, writers and other public figures who have received threats over social media—most recently media critic Anita Sarkeesian received such an onslaught of threatening messages that she no longer felt safe in her own home.

These stories are re-iterated by women in Canadian politics. They range from name-calling (rhymes with rich) to an MP who received rape threats on her Twitter feed.

If we want our councils to look more like our cities, we need to address all the very real, very specific barriers women face—barriers that include an unequal professional playing field, a lack of supports for balancing work and family life, and violence.

And instead of asking why more women don’t run for office, let’s take a moment to appreciate the women that do.

Kate McInturff is a Senior Researcher with the CCPA National Office.