When the facts on C-51 are against you, insult the witnesses

Tonight's hearing into Bill C-51, omnibus anti-terrorism legislation, began as this morning's, with witnesses expressing their opposition to all or parts of it. It ended with Conservative MP Diane Ablonczy accusing one presenter--yes, the group representing Muslims--of supporting terrorism. But hey, where logic fails, try deflection. The news tomorrow (or today, depending when on you're reading this) is guaranteed to be about Ablonczy's comments and not, or much less so, the expert testimony of Kent Roach, Craig Forcese, Alex Neve (Amnesty International), Ihsaan Gardee (NCCM) and others who, to put it bluntly, tore C-51 a new one today.

The National Airlines Council of Canada, represented by Executive Director Marc-André O'Rourke, started us off these evening with a relatively benign request to clarify one line in the entire bill. Canada's airlines are worried C-51 gives the Minister of Public Safety too much authority to complicate their lives. That's because it authorizes the minister to ask the airlines to do "anything" the government thinks could reasonably stop someone from engaging in a prohibited act (see Section 9 [1] of the Secure Air Travel Act). There are examples listed in the legislation, like denying someone the right to board, or performing screening against a watch-list (things airline workers do now), but the "anything" still bugs them.

As O'Rourke explained, the airline employees are the ones telling people they're on one of several watch-lists, they can't say which, and that there's nothing they can do to take them off or otherwise help them further. As civil liberties experts explained at this morning's hearing, the process is right out of Kafka. The industry would appreciate if the police could step in if the plan is to expand the number of people on the no-fly list, said O'Rourke, and help offset any additional costs that come with additional screening.

The presentation was somewhat overshadowed by the following one-two blow from legal experts Craig Forcese and Kent Roach. You can read the whole thing here, and by now their detailed disassembly of C-51 is surely worrying the government as it continues to convince other experts, editorial boards, and the general public there is something seriously wrong here. “We should not be a country that shares total and secret information about peaceful protests," said Roach regarding C-51's first section on information sharing with its expanded definition of what is a threat to Canada, which, he added, risks "drowning" the 17 agencies listed with all kinds of redundant information about Canada's various protest movements. Roach later also cautions about the lack of caveats on the sharing of information with foreign governments, in fact the "anti-caveat" nature of Section 6 of the Security of Canada Information Sharing Act.

Forcese focused on the bill's provisions for expanding CSIS powers, giving them the ability to disrupt what the agency considers to be threats to Canada (under the CSIS Act definition, where terrorism plays only a small role), suggesting it needed to be narrowed or risk being abused. “Will our most successful anti-terrorism tool, Criminal Law, be degraded by CSIS operations that muddy waters?” he asked, pointing out that CSIS is not held to the same standards as Canada's police forces, and that C-51 doesn't ensure, as the Air India inquiry recommended, that CSIS be required to share information on possible threats with the RCMP. “I do not doubt CSIS’s integrity. I do doubt its infallibility," he said.

NDP MP Craig Scott asked if anything in C-51 would prevent CSIS from detaining, kidnapping or rendering someone in Canada or abroad--whether it was included in the prohibition on causing bodily harm or death. Forcese carefully replied that these limited prohibitions would not necessarily stop CSIS from detaining someone, and that it was an example of why the rules for CSIS activities must be further defined in the legislation. Subsequently, the NDP's Rosane Doré Lefebvre asked Roach and Forcese to confirm or contradict Minister Blaney's statements from Tuesday that C-51 merely gives CSIS the authority to do what spy agencies in other allied (Five Eyes) countries can do. Forcese said that in Australia, the U.K. and United States, security officials are not allowed to break domestic laws or the equivalent of Charter rights in their counter-terrorism or other investigations. Lawyers 1, Blaney 0.

After the break, it was Ihsaan Gardee's turn to present the concerns of the National Council of Canadian Muslims, which says it is dedicated to protecting the human rights and civil liberties of Muslim Canadians "and by extension all Canadians." He told committee that his organization is as committed as anyone to Canada's security, and that Muslims are just as targeted by potential terrorist attacks as anyone else. But Muslims in Canada also fear "who is watching, who is tracking and what assumptions are being made" when they are simply going about their business, enjoying the freedoms everyone enjoys in Canada. Gardee explained how many calls he receives from Muslims who have been denied a boarding pass, declared "too dangerous to fly," and cautioned that “You can’t simply spy and arrest your way out of this problem," referring to this new wave of so-called radicalization of young Muslim men and women.

Enter Ablonczy, who rather than ask a question of Gardee accused his organization of supporting terrorism, as former Harper media officer Jason Macdonald did just over a year ago. The NCCM sued the PMO for Macdonald's statement, which was never redacted. Both Gardee and, later, the NDP's Scott publicly recognized Ablonczy could get away with her comments only because of parliamentary privilege. Outside committee, they could have attracted another lawsuit. But Gardee calmly countered he was there to address Bill C-51, not answer to ridiculous (and "slanderous") accusations. 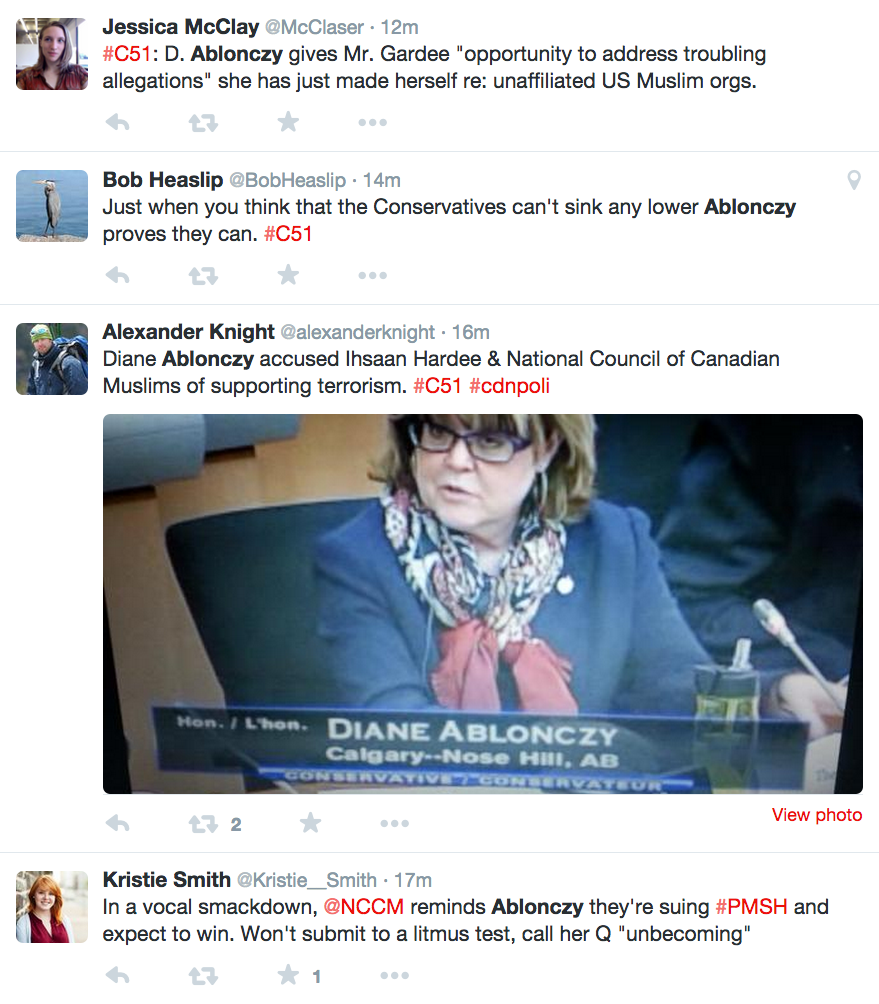 Amnesty International also set out its top concerns with C-51, which you can read here. Of course, at this point many of the presentations will start to resemble one another. But it's remarkable that of the 16 witnesses so far, including MacKay, Blaney, Coulombe and Paulson, about 90% of those who do not work for the government think C-51 is seriously flawed, almost certainly unconstitutional, counter-productive (if your goal is making it easier to stop real threats to Canada), and potentially criminal (depending on how CSIS handles its new powers).

It feels a bit like the Fair Elections Act hearings all over again, a kind of show trial where expertise doesn't matter (it's not invited to testify), and at some point it will become obvious to the government that something must break, a compromise has to happen. It could be on additional oversight and limited parliamentary access to secret information. It could be a stepping down on the definition of security threat in the information-sharing provisions. Unfortunately, like with the Fair Elections Act, even these compromises can't possibly correct the many serious flaws that expert after expert is pointing out in comprehensive detail. After his presentation this morning, AFN Chief Perry Bellegarde repeated his call to just scrap it entirely.

It appears the public safety committee is taking a week off, so there may be less to write about for a bit. But if there is anything, it'll be here at Behind the Numbers.