What’s wrong with the tar sands boom? (in one graph)

So let’s say that you don’t care about pipelines. Let’s say climate change doesn’t concern you or your children. Let’s say you aren’t concerned about the radical alternation in the landscape of northern Alberta.

What if when I say “tar sands” and you say “Show me the money!”

Well even if you didn’t care about the above, you should care about the money and where it has been going since the tar rush began. The value of crude oil since 1986 has risen 50% from $379/m3 to $570/m3 ($2010). That has created a resource rush like Canada has never seen. At its epicentre, the richest Calgarians have seen their average incomes rise over $600,000 (inflation adjusted) an increase of over 180% since 1986…make it rain!

Clearly there is someone living large when the price of oil goes up. Problem is it’s the 1%! 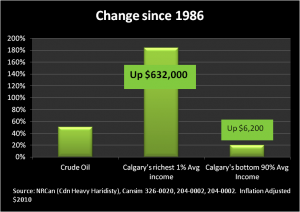