What's on the Agenda?

Remember in high school history when you learned about the very first nationwide protest for the nine-hour workday (May 1872) and the passing of the Trade Union Act the following month?

No? What about when Saskatchewan launched the first provincial Medicare system (1962), and Canada followed suit with a national health plan in 1968?

The establishment of the CBC in 1936?

The signing of the UN Declaration of Human Rights (drafted by New Brunswicker John Humphrey) in 1948?

We are surrounded by the present day effects of past debates and policy decisions—good and bad—but much of it remains absent from the political and social consciousness of too many of us.

Certainly it played a very minor role in the history I learned in school (even Canadian history!). Louis Riel made a brief appearance, and I seem to remember learning something about the Quiet Revolution in grade 12. And I do recall a Geography teacher in grade 5 completely botching an analysis of Quebec’s 1980 vote on Separation.

Now, I dig the Pythagorean Theorem, and the difference between deciduous and coniferous plants, and the handy rhyme that explained the fate of Henry VIII’s wives  (“divorced, beheaded, died; divorced, beheaded, survived”) as much as anyone.  But I can’t help but think I would have found the history behind the national public health care program that ensured I would receive superb and immediate diagnosis of and treatment for my childhood epilepsy equally interesting.  Or the rationale behind the program where high school students like myself spent six weeks of the summer in Quebec learning French.

So many of the policiess we take for granted, in spite of how our daily lives are shaped by them, go unacknowledged and underappreciated. And, I suspect, this may be why when certain key programs are dismantled or certain regressive policies are enacted, insufficient attention is paid. After all, if school children (and their parents and grandparents) remain blissfully unaware of the shameful past and present treatment of our First Peoples, are they as likely to recognize the significance of the Harper Government’s refusal to recognize the Kelowna Accord, or its very reluctant signing of the UN Declaration on the Rights of Indigenous People after voting against it in the first place?

If December 6 (the National Day of Remembrance and Action on Violence Against Women) is simply a day without historical context, can we truly understand the significance of the dismantling of the Long Gun Registry that was created following the Montreal Massacre, and the resultant outcry from women’s groups (and others) across the country?

And if the National Day of Mourning for those killed in the workplace is stripped of its meaning—and the knowledge even today that the number of workplace deaths remains staggering—how can people truly recognize the need for effective safety standards and the decades of struggle on the part of unions to achieve them for workers?

As a student of both History and English, I appreciate the use of stories to educate and to provide an accessible, dynamic and multifaceted way into a timeline of events. I also am very aware of the increasing demands on our time. So, what template would provide historical and contextual information on a variety of issues in a way that wouldn’t overwhelm?  And by the same token, how could it underscore the relevance of the past in our day-to-day lives?

Allow me to introduce the CCPA’s 2012 calendar: An Agenda for Social Change. This resource is, at the very least, a pretty striking wall calendar that will definitely keep your household or workplace organized throughout the year. But here’s where it’s different: key dates (positive and negative) in Canadian social justice history are highlighted every month. There’s a brief write-up, and then a much more detailed storyline for each date in the appendix. 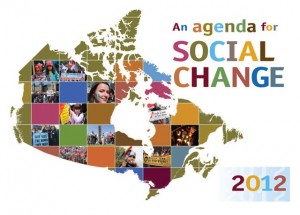 This resource is packed with information about the debates and decisions that continue to shape our development (and where we need to do much more work): the environment, First Nations, accountability, trade, labour, social programs, equality and gender. And in spite of this wealth of information, it’s by no means exhaustive; this is intended to be an annual project, so we expect to hear from readers about new dates that need to be included, new policies that need to be explained, and new programs that need to be contextualized.

We also want to hear about how this resource is being used: as a classroom tool (it is, after all, an alternative history), as a professional development resource, as a household organizational aid and conversation starter.

It’s been some time in the making (and there was a bit of break in production when I went on maternity leave—with top-up pay thanks to the Canadian Union of Postal Workers’ going on strike for it on June 30, 1981!), but we’re very pleased with the end result. An Agenda for Social Change is available for $25 (plus shipping and taxes) from the CCPA. Contact us for prices on bulk orders—and give yourself or a friend or loved one the gift of knowledge 365 days of the year.