What will we do with this decade? 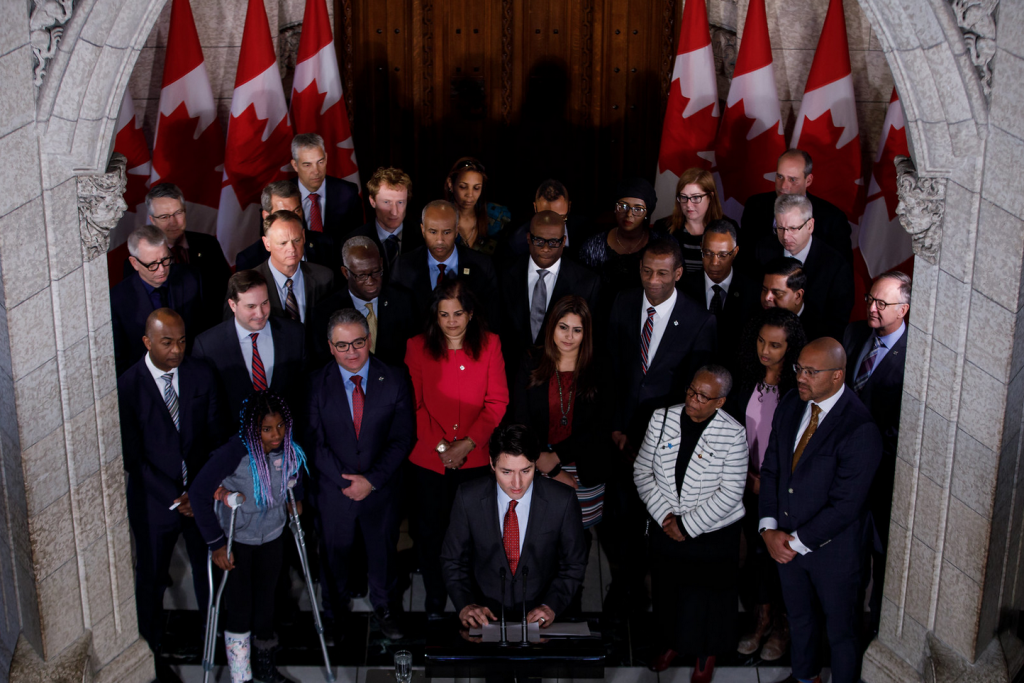 “Papa, you had a whole decade and this is all you did with it?”

Reflecting on the start of the second decade of this millennium, I shudder with heart-sinking shame at the thought of my daughter asking me such a question in January 2030.

She will be a few weeks shy of 12, and no doubt familiar with the looping social and broadcast media retrospectives on the moments that shaped the 2020s. But both she and I will know exactly what decade she’s talking about. It won’t be the one just gone by, but the decade starting in 2015 that, despite her young age, we’ll both feel more connected to.

On January 30, 2018, flanked by federal ministers, members of Parliament, and a small crowd of Black Canadians from across the country, Prime Minister Justin Trudeau (pictured above) stood in the foyer of the House of Commons to announce that Canada would officially recognize the United Nations International Decade for People of African Descent (2015–2024). Neither my daughter nor I will ever forget this day. It’s the day she was born.

Ten years from now, while many are reflecting on the highlights of the 2020s, I wonder if my daughter’s questions about the UN decade will sting. Will Canada’s Black communities have effectively seized or squandered the once-in-a-lifetime opportunities this moment availed to significantly reshape Canada’s racial justice record?

Already in January 2020, more of the UN International Decade for People of African Descent is behind us than is yet to come. Canada’s official recognition has had little to no substantial impact on the general material realities of Black people in Canada.

This is important to point out because the UN adopted the decade in large part to spur global action to improve the well-being and outcomes of Black communities in the areas of justice, education, employment, health and housing. This is explicitly and thoroughly outlined in the UN’s official program of activities, which lists dozens of concrete measures under the theme of “Recognition, Justice and Development.”

Five years into the decade, Canada has done moderately well with the recognition part. Justice and development, however, remain all too elusive for the country’s Black communities.

In Toronto, former police chief Julian Fantino was given a platform in the Sun newspaper to call for the return of carding, arbitrary ID checks that always predominantly target Black individuals. Fantino and the Sun thought the column was a good idea even after Montreal police were pressured to put a moratorium on the ineffective, rights-violating practice and Halifax issued an official apology to African Nova Scotians for engaging in this form policing.

With respect to the UN decade’s call for development, Black Canadians continue to chronically experience some of the highest rates of socioeconomic exclusion. In Toronto, recent reports out of the University of Toronto, nonprofit FoodShare and the Metcalf Foundation have revealed that Black communities face the highest rates of segregation, food insecurity and of being among the working poor.

In early December, Ontario media was talking about the case of Canadian rapper John River, whose months-long misdiagnosed leakage of spinal fluid strongly suggests systemic anti-Black racism in Canadian health care. River was presumed to be a drug dealer and possible drug abuser, he says, and thereby treated like he was embellishing his painful symptoms to get access to narcotics.

In November, the Ontario government announced a formal review of widespread anti-Black racism at the Peel District School Board, with the results set to be released in February. In Edmonton, the Catholic school board has come under fire for accusing an 11-year-old Black student of being in a gang because he wore a durag to school. The Vancouver School Board is facing a human rights complaint because of its handling of an incident wherein a white student was filmed going on a hatefully racist rant targeting Black students.

It’s not that Canada is doing nothing for the UN Decade for People of African Descent. The federal government has committed $25 million toward the objectives of the decade, to be distributed by a Canadian Institute for People of African Descent. The Nova Scotia government also released a plan to support provincial action on Black recognition, justice and development, as I noted in my last column.

Though these are important steps, with more than half of the decade now behind us, Canada should have more to show for its official recognition. My hope is that in the years to come, we will improve the pace of change for Black Canadians.

To which I will proudly respond, "Happy Birthday, bunny.”