What the Just? Transitioning to a low carbon, good jobs economy 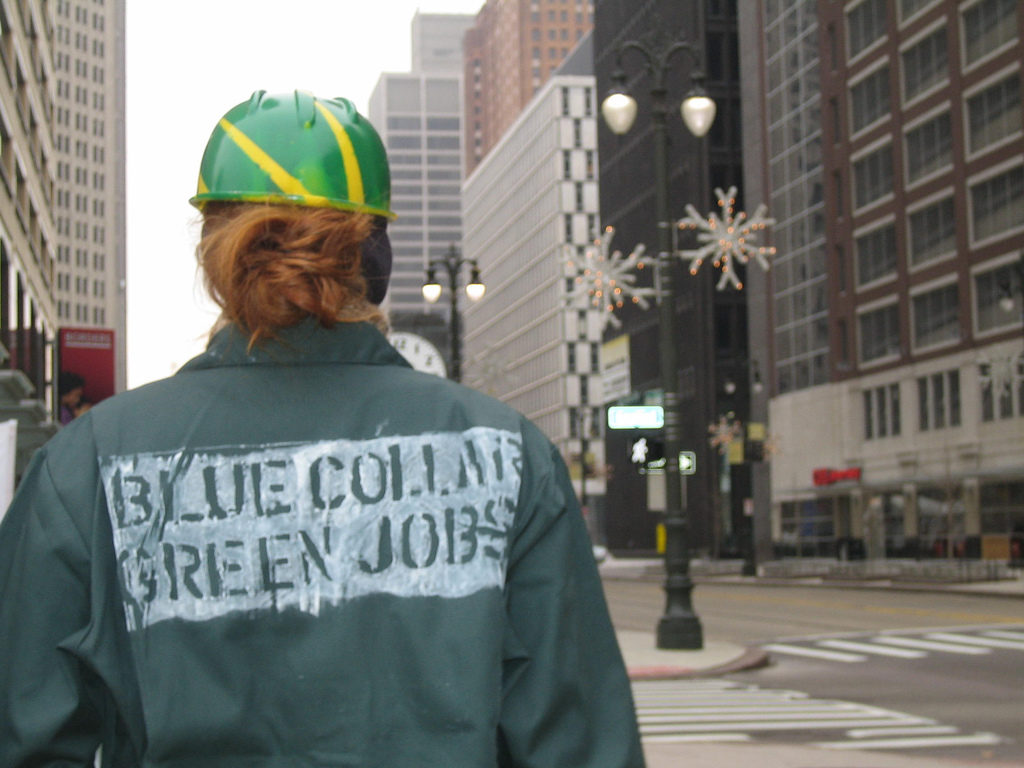 For most working people, environmental concerns have historically been a bit like Harvey Dent—two faced. One face says that poisoned water supplies and changing weather patterns threaten our health, our way of life, and our planet. The other face says we do not entirely understand human-environment interaction and cannot endure the loss of good paying jobs in economies focused primarily on resource extraction and energy production. As a result, working people often end up on both sides of environmental policy debates.

Organized labour has grappled with this apparent contradiction for decades. In the 1990s, the phrase “just transition” was adopted by organizations attempting to square job-related concerns with environment concerns. As the coal, oil and natural gas industries come increasingly under fire, these words remind us that the lives and fortunes of working people across the world are tied up in policies designed to mitigate and adapt to climate change.

Our post-Paris Agreement world has witnessed a recent surge of discussion and publication regarding just transition, with labour organizations and their supporters leading the way. Coalition organizations like Blue Green Canada and the Labour Network for Sustainability—which bring together labour unions, environmentalists, and civil society groups—have formed with the expressed mission of developing and promoting the principles of a just transition.

But what are we talking about when we use the term “just transition”? This concept advocates for precisely what it says: a transition away from a high-carbon economy that is equitable by design. A just transition is an approach to climate policy that values, accommodates, and involves workers from the outset.

Any semblance of justice in policymaking requires open conversation between all stakeholders, with particular attention paid to the voices and concerns of those people most vulnerable to the possible effects of change. A just transition towards a more sustainable economy, then, requires an understanding of the social dimensions and consequences of new policies. That means respectful, democratic dialogue between affected communities, industry, and government—not top down prescriptions.

For labour organizations, just transition means that workers who will be directly affected by Canada’s commitments to reduce emissions—namely, those employed in coal, oil and natural gas production—must be recognized for their contributions and brought along, rather than left behind, in the shift into a more sustainable economy. This will require careful, democratic planning in phasing out fossil fuel extraction and combustion, income and training supports, and targeted investments in areas dependent on high-carbon jobs.

So can we do it? For advocates of a just transition, the answer is yes, but principled, thoughtful policymaking is a key component for this process' success.

Representatives from the Alberta Federation of Labour and Canadian Labour Congress to the UN’s Framework Convention on Climate Change have advocated for the principles of just transition to be included in policies designed to reduce pollution and carbon emissions. These organizations, and a constellation of like-minded groups, recognize that climate policies will produce economic disruption, and that disruption— if left unmitigated— will directly impact workers. But done properly, this transition can address climate concerns while providing a robust array of good jobs to reinvigorate our economy.

At the CCPA, research into the policy framework for a just transition to environmental and socioeconomic sustainability is in high gear. Our preliminary review has focused on the strengths and gaps in existing federal and provincial transition policies, as well as the potential impacts on workers of climate policies put in place to support Canada’s Paris Agreement commitments. Our work will help inform the development of a social safety net robust and adaptive enough to support workers as they transition to new green sectors. Results from our research will be published next month.

The low-carbon transition may be inevitable, but a just transition is not. Purposeful, evidence-based policy is critical to developing a low-carbon future that creates opportunity for everyone who lives and works in Canada.

It’s time the Canadian government made workers a priority in the development of climate policy.