We’re paying for $7/day child care, so why is only one province getting it?

Many Canadians don’t know that Quebec has the least expensive childcare in the country at $7/day (well actually $7.30 now). Meanwhile in Toronto parents pay $49/day, and in Vancouver it's $41 a day for toddlers/preschoolers.

It’s no surprise that $7/day childcare is wildly popular in Quebec. It’s far cheaper than the national average, and allows for more parents, and far more women to enter (or re-enter) the workforce. It also creates more spaces in regulated centres.

In Canada, there are a million families with working parents who have young children. However, there are only half a million regulated child care spaces, leaving parents with long wait times and an increased reliance on the unregulated sector. 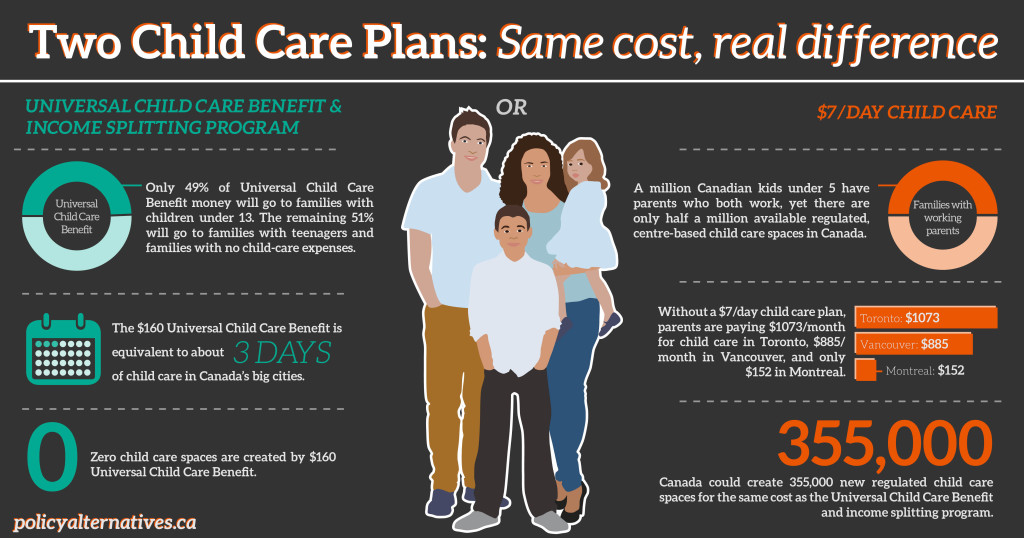 As of the fall of 2014, the federal government is spending the equivalent cost of $7/day childcare through the Universal Child Care Benefit (UCCB) and income splitting—untargeted programs that won't create a single child care space.

The federal Universal Child Care Benefit (UCCB) was “enhanced” by providing it to households with six to 17 year olds for their “child care”, and by giving a $60/month top-up to those with children under five. As the Parliamentary Budget Office points out, more than half of the new UCCB is paid to families who not only have no child care expenses, but whose teenage children are highly unlikely to require any type of child care at all.

As for income splitting, 89% of all families won’t benefit from it. The largest benefits from are going to high income families. Meanwhile, single parent and working class families gain very little or nothing at all.

And these programs are expensive. The UCCB, enhanced UCCB and income splitting will cost the federal government $7.1 billion in 2015 (net of income taxes: SPSDM 22.1). This scattershot approach of sending cheques to rich families, families not using child care, and families with teenagers in the hopes that some might land in the right hands will not deliver value for the money.

Here’s the kicker, Quebec spends $2 billion each year on $7/day childcare. The federal government in 2015 will spend $7 billion on UCCB, enhanced UCCB, and income splitting. That $7 billion would buy the rest of the country the same $7/day childcare program (to end up at the total $9 billion in Table 1).

Sending cheques to wealthy households (income splitting) or to families with teenagers (enhanced UCCB) is very costly but does not deliver affordable childcare. For that you need a concentrated program.

There is a real choice here: a UCCB cheque worth ~3 days of childcare and a chance at income splitting crumbs OR a cross-Canada $7/day childcare system. A more targeted approach would fulfill a genuine need for modern Canadian families and it would do so by simply focusing money we’re already spending.