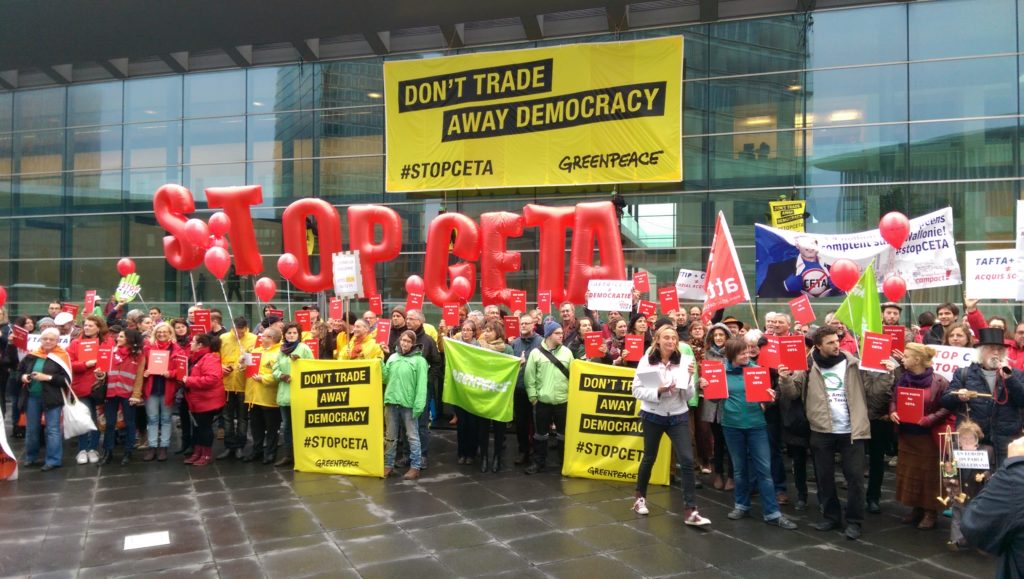 Today the regional government of Wallonia in Belgium rebuffed Canada’s last-minute efforts to salvage a deeply flawed and increasingly unpopular transatlantic free trade agreement. By standing firm under incredible pressure (and a considerable amount of bullying), First Minister Paul Magnette gave a voice to millions of citizens who feel the Comprehensive Economic and Trade Agreement (CETA) fails to represent their interests.

His principled opposition to CETA, as negotiated, is not about protectionism or indeed about the importance of international trade. As Magnette said this week: “The question is in fact, what kind of globalization do we want?”

Do we want to expand a discredited investor-state dispute settlement system that, despite procedural reforms, still gives special rights to foreign investors to challenge public policies and regulations that hurt their profits?

Should regulations be viewed as burdens on business and impediments to trade, or as essential protections for workers, consumers and the environment?

Why can’t a treaty like CETA fully exclude public services, ensuring governments can expand them or reverse privatizations without risking costly lawsuits from aggrieved investors?

An “interpretive declaration,” hastily cobbled together, in secret, over the past two weeks is essentially an admission these are legitimate concerns. But it fails to fix them. If governments are serious about addressing the flaws in CETA, they need to reopen and amend the text, as Wallonia and others have demanded.

It was embarrassing to see both Prime Minister Trudeau and Trade Minister Freeland scold Europeans about the state of their democratic institutions and their internal decision-making processes. Countries are not “nice” and “patient.” What happened this week in Brussels should not be seen as a clash between Europe and Canada.

Rather, it is about political courage creating the space for an overdue debate about whose interests should be served by trade treaties—citizens or corporations?

Whatever the course of events over the coming weeks, Wallonia’s resistance has given Canada and the EU a historic opportunity—to give reality to their rhetoric about forging a transatlantic relationship based on “progressive” values.

Scott Sinclair is the director of the CCPA’s Trade and Investment Research Project. Stuart Trew is the editor of The Monitor, the CCPA’s national magazine. Follow Stuart on Twitter @StuJT.

Scott and Stuart wrote this from Brussels, where they spoke about CETA in the European Parliament and are discussing the deal with civil society organizations and others.