“We must not let the legacy of the pandemic be one of rolling back the clock on women’s participation in the workforce, nor one of backtracking on the social and political gains women and allies have fought so hard to secure.” (Speech from the Throne, September 23, 2020)

This call to action does not come a moment too soon. Wednesday’s news also included a report out of Alberta that child care centres are only at half capacity. Even with new funds to assist with the costs of reopening, parents have been opting to keep their kids at home in the face of the uncertainty of the health crisis.

Rising COVID-19 numbers and the gross inadequacies of reopening plans for child cares and schools have left the child care sector on the brink. Without immediate assistance, centres across the country will close over the next few months, dragging Canada’s economic recovery prospects down with them.

Which is why the announcement of “significant, long-term, sustained investment to create a Canada-wide early learning and child care system” is so welcome. As is the intention to develop an Action Plan for Women in the Economy to create and drive a whole-of-government, intersectional approach to the pandemic and gender-based recovery.

No time to waste

Economic losses have fallen heavily on women and most dramatically on women living on low incomes who experience intersecting inequalities based on race, class, gender and sexuality, disability, education, and migration and immigration status. Many have lost employment or had their hours cut back significantly and are now sitting on the sidelines of the recovery.

Gains in employment have been especially weak among mothers with children under 12. By August, fathers had effectively recouped all of their losses, while 11.7% of the mothers (over 236,000) who were working in February were still without work or working less than 50% of their regular hours.

On this score, lone parents have experienced greater loss of employment and are recovering much more slowly than parents in couple families. Single moms had only recouped a fraction of their employment losses by August: one in three (29.2%) were still unemployed or working reduced hours as a result of the pandemic, including 42.2% of mothers with kids under six.

There is tremendous economic hardship ahead. Prior to the pandemic, women earned 42% of household income and were, on average, responsible for almost half of household spending. The precipitous collapse in employment will inevitably lead to higher levels of low income and poverty, not just in the coming months, but, for years to come.

Indigenous women, women with disabilities, racialized women and transgender women face the greatest challenges. They are most likely to be living in poverty and experiencing violence, with the least access to affordable food, quality housing, needed health services, and social supports.

There is a lot riding on the federal government’s recovery plan. The government has introduced a suite of measures to replace the Canada Emergency Response Benefit (CERB). This includes temporary reforms of the EI system to expand eligibility for the program (abysmally low before the pandemic) and to boost benefits for low-income workers. It’s also proposing three new programs for those who do not qualify for EI but are unable to work for reasons related to COVID-19.

These new programs recognize that many more people will be dealing with volatile incomes and reduced employment opportunities. Of roughly 4 million CERB recipients, 2.1 million will transition to the new EI program according to my colleague, David Macdonald’s, analysis, including 1.25 million women. Another group of self-employed and gig workers numbering almost 900,000 will be eligible for the new Canada Recovery Benefit (CRB).

The Canada Recovery Sickness Benefit (CRSB) will extend support to about 4,000 workers, mostly men, while the Canada Recovery Caregiving Benefit (CRCB) is expected to cover 181,000 current CERB recipients, 82.3% of whom are women who have left their jobs to provide care for their children and other family members. After considerable pressure, the income floor for EI benefits and the three new benefits has been set at $500/week—a huge win for workers and their families. 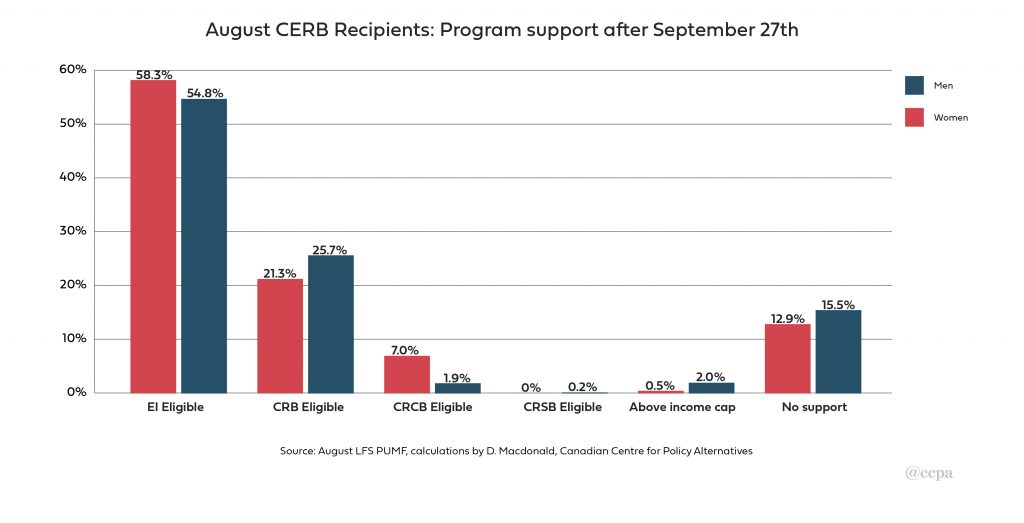 The new caregiving benefit is a smaller program than the one it is replacing. The criteria for the CRCB are stricter than for the CERB: the child has to be under 11 years old, the applicant must have been unable to work for at least 50% of the time they would have otherwise worked, and the parent can’t be keeping the child home voluntarily. This benefit will be hugely valuable to families, particularly lone-parent families, but it may also reinforce gendered caregiving roles, absent other meaningful support for low- wage workers.

These new benefits will extend critical support to millions over the next months. Taken together, two-thirds of CERB recipients in August—1.4 million women and 1.0 million men—will receive the same level of support that they received on CERB, while one in five (18.5%) female CERB recipients and one in four (24.7%) male CERB recipients will be better off financially.

However, over half a million current CERB recipients, mostly women (55.9%), will receive no financial support from EI or the new set of recovery benefits. A few of these people won’t be eligible because of the annual income cut-off ($38,000/year) that now applies to the CRB, but the large majority will be those currently working for very low wages and/or for very few hours and ineligible for EI. 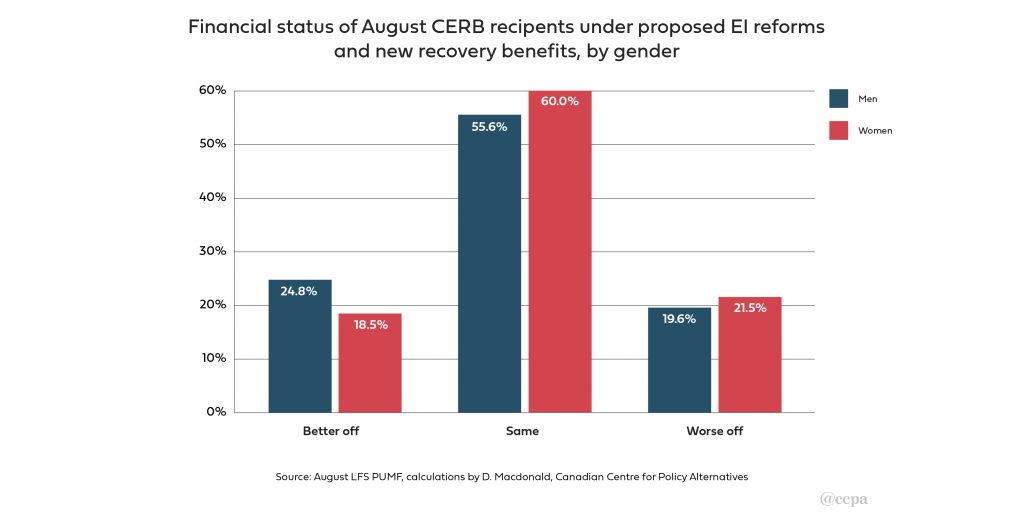 Altogether, more than 450,000 women—21.5% of all current female CERB recipients—will be financially worse off under the new programs than they were on the CERB program. This group, those who have experienced the harshest impacts of the pandemic and economic crisis—racialized communities, single parents, migrant workers, people with disabilities, and newcomers—have been left behind in this Recovery Plan.

Other key announcements hold out promise. Will the Economic Response Plan deliver?

There are several other key initiatives in this week’s Speech from the Throne that are essential to women’s economic recovery and future security. These include plans to:  We can’t understate the importance of these initiatives and the hope for transformative change. A new disability benefit would reduce the numbers living in deep poverty and improve the health and well-being of millions.

And, yet this all hinges on what comes next: the program details and funding commitments in the COVID-19 Economic Response Plan, expected later this fall.

Where’s the sense of urgency?

For all that this document resonates, there is a sense that the Throne Speech misses out on the urgency of the moment and the threat that attacks from the extreme right and inaction on the part of governments at all levels represent.

The pending collapse of our child care system should be capturing all of our attention. Yet many are standing by while critical infrastructure collapses, clearly with the expectation that families—and mothers in particular—will step in to shoulder this massive increase in unpaid labour.

Vulnerable seniors in nursing homes are falling ill once again as the second wave takes hold, with provincial governments having failed to take meaningful action to fix the deeply embedded problems that killed seniors in such large numbers in the spring.

Not only standing by, other leaders are deriding calls for greater attention to systemic racism and intersecting forms of discrimination as “kooky academic theories”, a distraction from the more pressing health and economic issues at hand. What is actually “kooky” is the idea that we could ever begin to understand and come to terms with a crisis of this magnitude without focusing on the experiences of those most impacted by it.

What’s needed now is a heightened sense of urgency to move the promise of this Speech from the Throne into the transformative action required to ensure that women’s rights are not rolled back decades. This is the fight of our generation. Urgency is absolutely required.