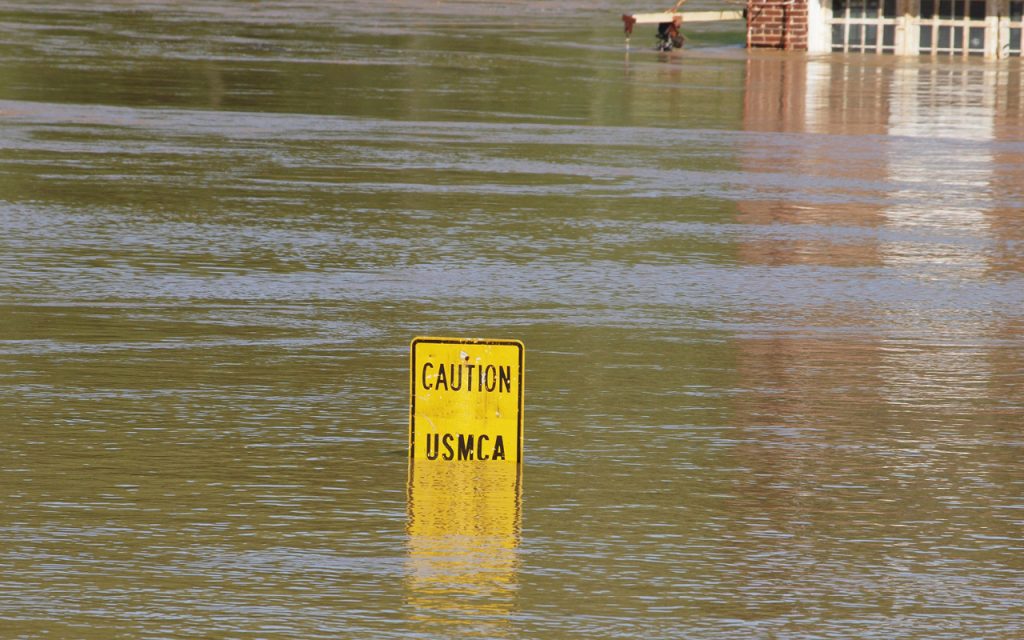 One week after Canada, the United States and Mexico reached a last-minute deal on a revamped NAFTA—rebranded as the USMCA—the Intergovernmental Panel on Climate Change released a dramatic new report detailing the failure of governments around the world to act on climate change.

They’re more related than you think.

The IPCC report reiterates the need for the global economy to achieve carbon neutrality by 2050 to avoid the worst effects of climate change. All government policies must be pulling in the same direction for “rapid and far-reaching transitions” producing “deep emissions reductions in all sectors” to occur.

Yet despite some notable improvements over the original NAFTA when it comes to environmental protection, the USMCA fails to acknowledge or address the severity and urgency of the climate crisis. At a time when fundamental economic changes are necessary to decarbonize the economy, the agreement reinforces business-as-usual in the North American economy, which is responsible for 18% of global greenhouse gas emissions.

Like most free trade agreements (FTAs) signed in the past decade, the USMCA includes a dedicated environment chapter (Chapter 24), which replaces NAFTA’s side letter on environmental cooperation. Also like most FTAs, the USMCA’s environmental provisions are narrow and aspirational rather than comprehensive and binding. For example, while it states that each country “shall strive to ensure that its environmental laws and policies provide for, and encourage, high levels of environmental protection,”  the deal does not oblige them to do so.

The chapter omits specific reference to the Paris Agreement and several other important multilateral environmental agreements. Incorporating multilateral deals into the text of an FTA is an opportunity to give teeth to otherwise aspirational commitments.

Indeed, the USMCA’s environment chapter doesn’t mention “climate change” at all, despite it being a key plank of the Canadian government’s so-called “progressive” trade agenda. The chapter does include language related to “air quality” and “pollution,” but the provisions are limited to “recognizing” the problem rather than addressing it.

This weak language renders the chapter’s enforcement mechanisms—a point of pride for Canadian negotiators—basically irrelevant. Moreover, enforcement is only possible if a government fails to uphold an environmental law “through a sustained or recurring course of action or inaction in a manner affecting trade or investment between the Parties,” which significantly curtails potential challenges. It’s difficult to imagine the USMCA being used to defend any environmental measure, let alone enhancing or introducing new measures commensurate with the scale of the climate change challenge.

The USMCA’s most important improvements from a climate perspective are not in the environment chapter at all. First, the USMCA mostly eliminates the investor-state dispute settlement system (ISDS) that allowed multinational corporations to sue governments for environmental regulations. Second, the USMCA eliminates the “proportionality clause” that required Canada to maintain energy exports to the United States at a certain level. Both clauses tied governments’ hands and permitted unchecked growth in the fossil fuel sector. Their elimination is a huge win for progressive critics of NAFTA and should not be understated.

Nevertheless, there are caveats here. ISDS continues to apply between the U.S. and Mexico in the oil and gas sector, so major American investors in Mexican oil fields will continue to receive extraordinary rights to challenge environmental regulations in that country. The USMCA also prevents countries from restricting exports of goods, including energy products, to another party, which could hamstring some supply-side climate policies.

Furthermore, a U.S.-Canada side letter on energy guarantees access to each other’s pipeline networks for importing and exporting fossil fuels. Canada also fought for a ten-year exemption from the USMCA’s “non-commercial assistance” rules to proceed with state funding for the Trans Mountain pipeline project.

Other risks to climate action in the new USMCA include a new chapter on “good regulatory practices,” which threatens to lower environmental standards to the lowest-common denominator, and the continued prohibition of local development requirements in green energy procurement contracts.

The USMCA may be a modest improvement over NAFTA from an environmental perspective—if only because ISDS was so abhorrent—but the standard by which we judge the deal’s environmental provisions should not be the status quo. When it comes to climate change, “do no harm” is no longer good enough. The USMCA fails to meet even this low bar.

Instead, the standard by which we judge any economic policy today should be the extent to which it proactively facilitates the transition to a zero-carbon economy. At a fundamental level, anthropogenic climate change is the product of a modern global economy deeply dependent on fossil fuels. Any policy that directly or indirectly encourages further production and consumption of coal, oil and natural gas is a failure for our planet and, by extension, our economy.

In its new report, the IPCC cautions that limiting global warming to 1.5ºC will require systemic transitions that are “unprecedented in terms of scale.” Mitigating and adapting to climate change will not be easy or cheap, but by ignoring the problem and entrenching barriers to climate action the USMCA will only make the inevitable transition more difficult and expensive.