With the NDP offering a national child care program - capping fees at $15 a day - in this election, quality, affordable child care has become a hot issue on the federal campaign trail.

It’s also an issue that will likely resonate with many Ontarians who are concerned about high child care fees and stagnant incomes.

This post focuses on another good reason to invest in high quality, universal child care in Canada: improvements in women’s labour force participation.

Focusing on the Quebec experience – where child care was introduced in 1998 for an affordable $5 a day[1] – Fortin, Godbount and St-Cerny found that the introduction of universal child care boosted women’s employment by 9.3 percentage points by 2006.[2]

This translates into an additional 69,700 mothers working than would have been working if the program had not been implemented.

The benefits of an affordable child care program were profound. The program was found to have the direct effect of increasing Quebec’s GDP by 1.7%, increasing total government revenue by $2.2 billion in 2008 and reducing total social assistance benefits paid by $116 million.

In short, as a result of the increased employment rate of mothers, the Quebec child care program more than paid for itself in returns to all levels of government.

What might the impact of universal child care be in Ontario?

Ontario is currently home to the highest median parent fees in Canada. In the City of Toronto, child care is the biggest expense that families with young children face, on average. 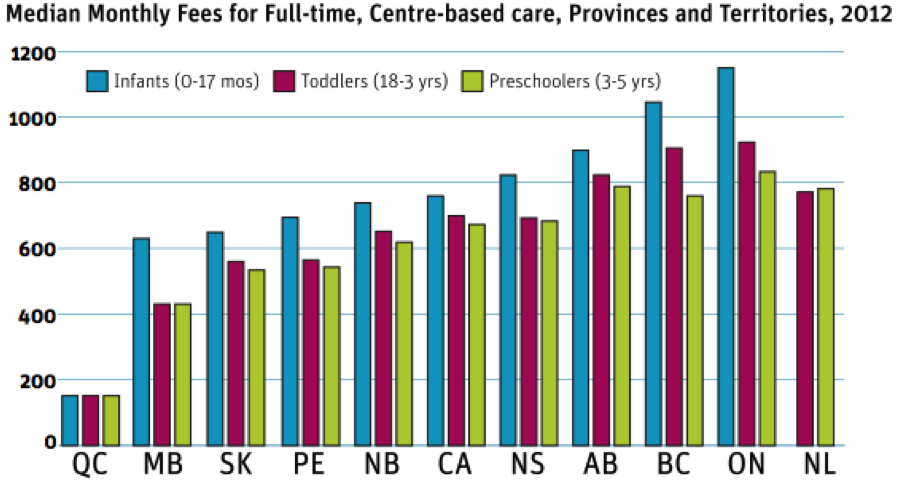 Source: The state of early childhood education and care in Canada 2012

Ontario does fund a subsidy program for low-income families, but the wait lists are long. In Toronto, the child care subsidy wait list averaged just over 17,000 in the first three months of 2015.

Where child care is concerned, Ontario is home to seven of the 10 least affordable cities in Canada, according to a child care affordability index constructed by CCPA Senior Economist David Macdonald and CCPA Research Associate Martha Friendly last year.

Would more Ontario women joining the labour force be enough to mimic the experience in Quebec?

Using Fortin’s findings as a guide, we can provide some estimates of what the results might look like in Ontario. I took Fortin et al.’s calculation for Quebec and created a comparable table for Ontario with more recent figures. These are presented below: 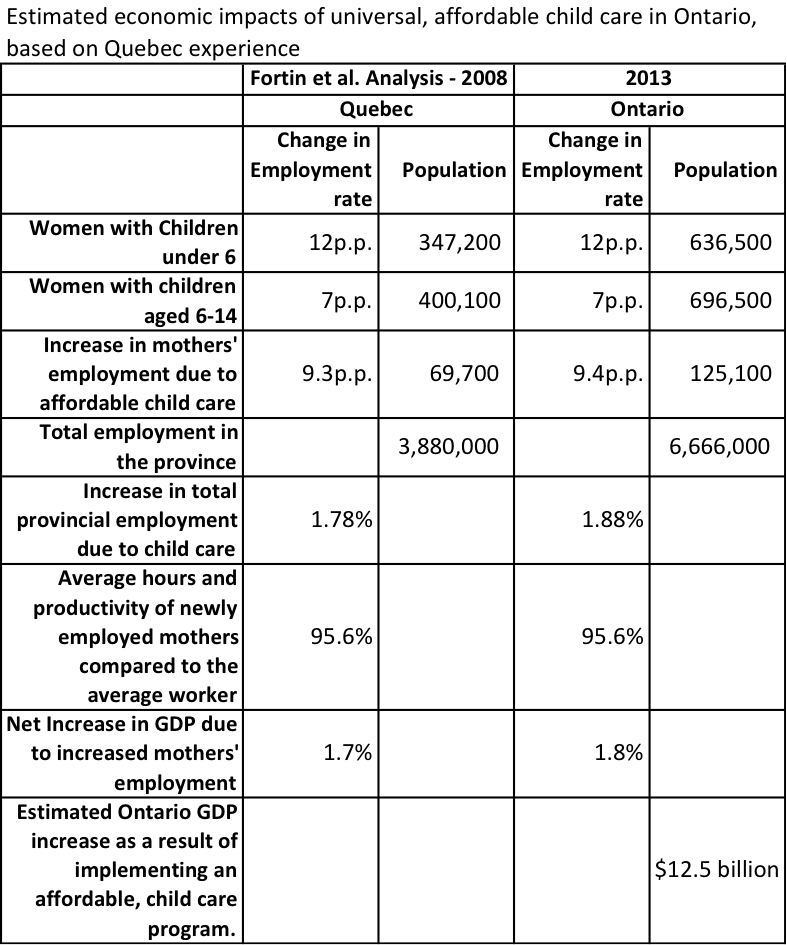 In 2013, Ontario had approximately 1.3 million mothers of children under 15. With appropriate caveats[3][4][5][6] in mind, had Ontario implemented a universal child care program 10 years earlier, the employment rate could have increased by 1.88%. That would mean that with the incentive of affordable child care, there could have been 125,100 more women with children out there directly helping to grow the economy.

Such an investment in affordable child care in Ontario could increase employment income by about 1.8 per cent, leading to a direct and indirect increase in GDP of $12.5 billion (Ontario Finance, 2014).

A child care fuelled increase in the employment rate could contribute to GDP in static and dynamic ways. More women would be earning an income in the work force. When that income is spent in the local economy, businesses gain more and/or repeat clients and sales, and they are able to employ more workers who, in turn, have and income to spend in the local economy.

When employed, mothers will also pay income tax and reduce reliance on government supports and transfers, both of which have an impact on government budgets and overall expenditures.

As a result, federal and provincial and governments could expect to see increased revenues to offset the cost of offering more affordable child care spaces to parents.

This increased revenue would result from the increased income tax and sales tax revenue that more working families would pay because they would have more money to spend.

Any child care program should focus on quality, as well as expanding the number of publicly funded, regulated child care spaces available to parents. It is not enough to simply make existing spaces cheaper; the focus must also be on keeping the quality high as well.

Research confirms that children in high quality child care benefits all children, particularly those living in low-income families. This can’t be said when the focus is placed on price alone. 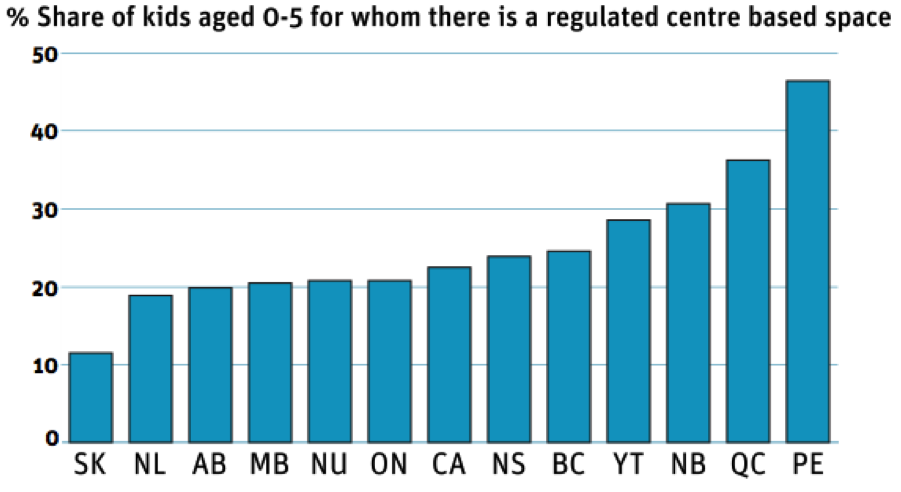 Source: The state of early childhood education and care in Canada 2012

As the chart above shows, Ontario falls in the bottom half of the pack when it comes to providing licensed child care spaces. There are only enough licensed, centre-based spaces for 21% of kids aged 0-5 in the province (though Ontario does now offer full-day kindergarten for children aged four and five).

In Quebec that number is 36% and in PEI it climbs to 47%. Clearly, there’s room for improvement in Canada’s largest province. A federal-provincial initiative to expand the share of affordable, quality child care spaces in Ontario could be a win-win.

The experience in Quebec shows that it’s a sound public investment that’s well worth any government’s while.

[1] In 2004, parent fees in the Quebec program were increased to $7 a day. Last year, the program moved to a sliding scale structure where the lowest income families pay $7.30 per day and the daily fee increases with income.

[2] No new child care spaces were added after 2006. It is therefore reasonable to assume that the program did not have any further impact on the employment rate of mother’s. This analysis focuses on 2014.

[3] Ontario’s economy in 2014 shares some similarities and many differences with Quebec 1997.

[4] Quebec introduced its child care program at $5/day and gradually increased the cost. The impact in Ontario would depend on the price.

[5] Quebec has a far more flexible maternity, paternity and parental benefit plan than the rest of Canada. The differences in the plans would have a slight impact on the employment rate of men and women, particularly the self-employed.

[6] Ontario has already expanded and fully implemented full-day kindergarten for 4 and 5 year olds. This would have an impact on the employment rate of parents as they no longer have to pay for full-day child care for their children (but are still required to pay for before and after school care).

[7] Estimated as 1.8% of Ontario government revenue and 1.8% of the estimated revenue in Ontario for all levels of government.