Simon Tremblay-Pepin is a researcher at IRIS a Montreal-based left-wing think tank.

From an outsider’s point of view, the last federal election may give the impression that a majority of Québécois(es) have converted to social democracy and asymmetrical federalism. This analysis aims to demonstrate the shortcomings of such an interpretation, without diminishing any hopes about the potential collaboration between progressives in Québec and the rest of Canada.

In this post (the first of a series of three posts) I will try to demonstrate that there is no correlation between the NDP wave in Québec and a rise of support for left-wing ideas. The next post will be about Québec, the NDP and sovereignty. And my last post will offer a counter-analysis of why Québecois(es) voted for the NDP and how we, as progressives, can still work together on many issues.

Let’s look at the main actors in the actual political spectrum, from right to left:

ADQ: A right-wing party led for decades by Mario Dumont. After a disastrous moment as the official opposition, it went through a crisis and its current leader, the ex-journalist Gérard Deltell, is just getting the party back on track. The ADQ focuses on reducing state intervention and apparatus, and reducing unions’ power.

PLQ: Québec’s oldest party, the Liberal party, is the classic center-right party. It recently went through a series of scandals about its financing and organization. Its program is centered on promoting federalism and managing the capitalist economy for its best growth, which means reducing state interventions.

PQ: This sovereignist and centrist (leaning recently to the right) party is going through an important crisis. Five of its MNAs just left its caucus, contesting Pauline Marois’ leadership (more details, in French, here). The party has been created with the primary goal of attaining Québec sovereignty, but seems hesitant to promote it. Its social convictions are also on the margins of its proposals.

PVQ: Québec’s green party is almost non-existent. Its last general meeting had a few dozens participants and its newly elected leader is more or less unknown. Trying to defend neutrality on the nationalist/federalist and right/left spectrum, its central proposal is to adapt the actual economy to environmental issues.

QS: The five-year-old left-wing party only has one elected MNA, Amir Khadir, but he succeeds in often being at the centre of political debate. Quebec solidaire presents itself as a left-wing sovereignist, feminist, pacifist and alternative to globalization party.

Where we are now?

If the orange wave that hit Québec in the last federal election was the result of widespread and growing support for left-wing political options, wouldn’t we see its effect on the provincial poll results too? In the last poll results, do we see a rise of Québec solidaire or the centrist Parti Québécois? 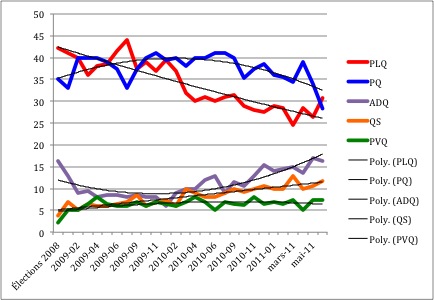 Source: Monthly average of Léger and CROP polls from December 2008 to June 2011.

As we can see, even if Québec solidaire has been on a steady rise for the last three years, it’s still far from power with around 11%-12% of the vote intentions. Initially, the PQ appeared to the most probable winner for the next election, but its internal crisis has translated into a negative tendency in the last year. In June, it tracked lower in the polls than even the infamous Liberal party of Jean Charest.

Did the orange wave change anything in the poll results in Québec since the last provincial election? We can think it had a consequence on the PQ crisis (amplifying it because of what happened to the Bloc), but one thing is certain: it didn’t meant a major left-wing turn.

Outside of the PQ implosion (but not disconnected to it), there is another major political remapping happening in Québec. François Legault, an ex-PQ minister under the reign of Lucien Bouchard and Bernard Landry, is planning to form a new political party. His actual Coalition pour l’avenir du Québec (Coalition for Québec’s future – CAQ) is at the centre of great media attention and speculation. He recently clearly stated his intention to have a functioning political party ready for the next provincial election, even held in the Fall.

Where does François Legault belong politically? Inside the PQ, he was clearly linked to the right-wing clan -- with Joseph Facal and Guy Chevrette. He is much more in favor of technocratic solutions than the ADQ though, and much less populist. A typical entrepreneur who came to politics in the ’90s, Legault wants to implement reforms in the public sector linked to the private sector way of organizing. His buzzwords: performance, competition, user-based fees, etc.

So, what if Legault comes into our socialist haven? How does this change the poll results? Here are the results of a survey conducted only one month after the federal elections: 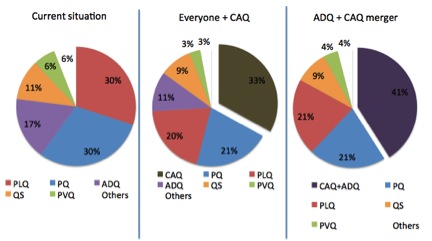 As the last pie chart shows, if the two right wing political organizations merge, they could potentially get 41% of voter support (almost as much as PQ and PLQ together). PQ and PLQ would lose about a third of their sympathizers with this new player on the political chessboard. This poll is only political fiction, so we must be very prudent with our conclusions. Certainly they do not reflect what the results would be after a campaign.

But still, we can see that Québec’s taste for change isn’t actually favoring the left on the provincial level. Basically, all the poll indicators at the provincial level tell us that the orange wave has nothing to do with a major left-wing enthusiasm in Québec.