I’ve contended for the last two years that between 2005 and 2010, an intensive public relations campaign was undertaken with the aim of increasing tuition fees in Québec. I believe it was crucial when the proposal to hike fees was formally submitted in Raymond Bachand’s first budget, the Liberal government’s last Minister of Finance and contender in the party’s current leadership race. Until recently, this impression was tied up to a very personal reading of the media. However, I came up with the strange idea of empirically testing this hypothesis whilst I was preparing to participate in a conference at the sociology department of the Université du Québec à Montréal (UQAM). I thus spent a few days producing the following…

To try and verify my claim, I went over slightly more than 1,400 texts from La Presse, Le Devoir, and Le Journal de Montréal between 1 May 2005 (the end of the 2005 strike) and 17 March 2010 (the eve of the first Bachand budget). I’ve restricted myself to the main newspapers for two reasons: (a) it’s easier to track key words in written media and (b) I believe —though it needs to be demonstrated— that the positions for which they advocated were pretty much the same as those defended in other media.

Of these 1,400 texts, I isolated 771 truly about the tuition hike. The other texts addressed a variety of other subjects or mentioned the tuition fees only in passing. I then codified one by one all 771 texts. A first attribute differentiated between articles (written by professional journalists to report on events or on what has been said), editorials or columns (written by someone whom the newspaper pays to share his or her opinion or analysis), and open letters (written by someone who is not paid by the newspaper, but chosen by a newspaper employee).

The second codified attribute concerned the substance of the text: is it in favour of the hike, against it, or neutral/nuanced. In the case of articles, the allocated code did not depend upon the presumed opinion of the journalist, but on the side which is given a say (if both opinions are expressed, the article is considered “neutral”). Editorials, columns, or open letters classified as “nuanced” were in the vast majority in favour of the hike, but raised a caveat. Only exceptions, in less than a dozen cases I’ve treated as “nuanced” argumentative texts of which I was unable to grasp the positioning.

Obviously, this methodology mirrors the lack of time I had to perform the analysis. The positioning of articles or the argumentative capacity of all texts has not been considered. The only phenomenon to be studied has been repetition. Despite its limits, the result of the analysis prove to be interesting.

So? What do we get from this compilation? Well, if we look at all of the texts, here is the distribution of those in favour, those opposed, and those “neutral or nuanced”. 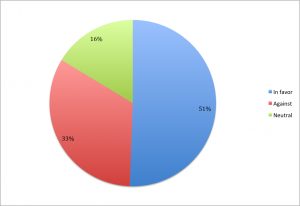 The balance is clearly tilted towards those favourable to the hike. Quite honestly, this advantage seemed lesser than I had anticipated from simply reading newspapers throughout the years.

However, my initial impression seems closer to reality when texts are divided up by type. 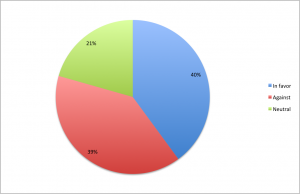 Indeed, the articles written by professional journalists are pretty balanced. It seems that the journalists from all three media under scrutiny gave a say to both sides and covered events relatively fairly during the period. 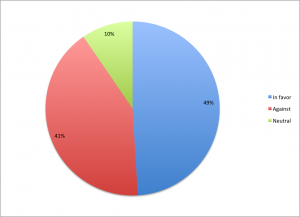 The open letters are clearly favourable to the tuition hike, especially given the fact that open letters judged “neutral or nuanced” were in majority in favour of the hike.

The imbalance is nonetheless not as disproportionate as that found in columns and editorials.

Graph 4: All columns and editorials 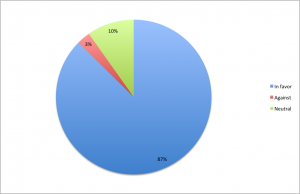 The result this time is crystal clear. Out of the 143 editorials and columns about tuition fees published during those five years, 125 definitely supported the hike, 14 did so with a caveat, and only four texts —less than one text per year!— opposed it.

The campaign over time

The period studied covers 20 quarters. It’s interesting to see how each side rolled out its argument over time, and to note each’s periods of intensity. Graph 5 presents the chronology of the debate. 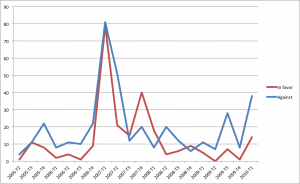 The 2007 elections, during which the hike was an important issue, explain the first peak (2007-Q1). The second (2007-Q4) was caused by the 2007 increase which the newly reelected Liberal Party introduced. The third peak (2010-Q1) happens as Bachand’s first budget was fast approaching and rumours concerning the new hike were circulating.

The types of text published vary in relation to events. To give a clearer picture, I grouped open letters, columns, and editorials under the heading “argumentative texts”, which I opposed to “informative texts” (articles). Graphs 6 and 7 present the result for each side.

Graph 6: Argumentative and informative texts in favour of the hike from the second quarter of 2005 to the first quarter of 2010 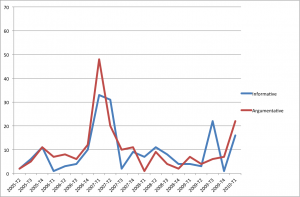 Graph 7: Argumentative and informative texts against the hike from the second quarter of 2005 to the first quarter of 2010 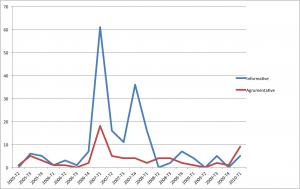 As you can see, the side in favour of the hike benefitted from a much greater quantity of argumentative texts. Even during the peak period in which those against the hike published more texts (2007-Q3-Q4), supporters of the hike still succeeded in getting in more argumentative texts than their opponents. Similarly, during the electoral period, editorials, columns, and open letters in favour of the hike came tumbling down whilst opponents were mostly reported in action (organizing demonstrations, caravans, etc.) instead of explaining their position.

Media coverage of their actions or declarations are the first and foremost access to media granted to opponents of the hike. Those who advocate it do so often through argumentative texts in which they have more space for well-developed demonstrations. Indeed, even though an informative text can express some arguments, it cannot convince as easily.

The effect on public opinion

The texts studied report on a total of six polls on the tuition fee hike (including two in the same month which I’ve averaged). The point is certainly not to accentuate the value of these soundings as if they were the only important thing in public space. However, visualizing the effect which a media campaign of this scope can have on support for the idea to increase tuition fees is certainly worthwhile. 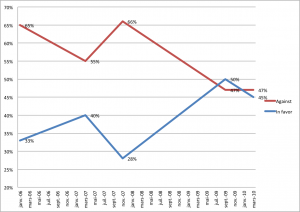 It’s hard not to understand as an effect of the media campaign the fact that, in average, in the four polls conducted in 2006-2007, 60% of the population was against the idea whilst in the two polls conducted in 2009-2010, this figure drops to 47%. The unremitting pounding of the same arguments have found here their effect.

We can also ask the question backwards: how can one justify such an editorial unanimity on a debate concerning a very precise public policy, especially when it runs counter to the opinion of a solid majority of the population. The same question applies to the open letters published in La Presse: 60% of the population is against the hike, but 77% of letters published on the topic are in favour. What explains this anomaly?

This is the state in which public opinion was when the debate on the burning issue of tuition fees opened in 2010-2012. On the back of this small research, we can certainly claim that it is not mere coincidence, but the result of certain individuals and organizations’ repeated efforts to occupy public space and put forward the tuition hike.

If information journalists’ approach gave room to diversity of opinion, a resounding unanimity sprung from the three main newspapers’ editorials and columns. Confined to informative texts, the side opposed to the hike did not manage to retain the support it had after all garnered in public space in the wake of the 2005 student strike.

Obviously, this quick glance lacks in scientific value. One would need much more refined tools and a greater capacity to survey the other media to get a better sense of the situation. More details can be found in the French version of this text, published in two parts on IRIS’s blog (here and here). Nonetheless, as are all attempts at being empirical, it is by far preferable to the dispersed impressions on the issue one could have before looking more closely into it.

This article was written by Simon Tremblay-Pepin, a researcher with IRIS—a Montreal-based progressive think tank.