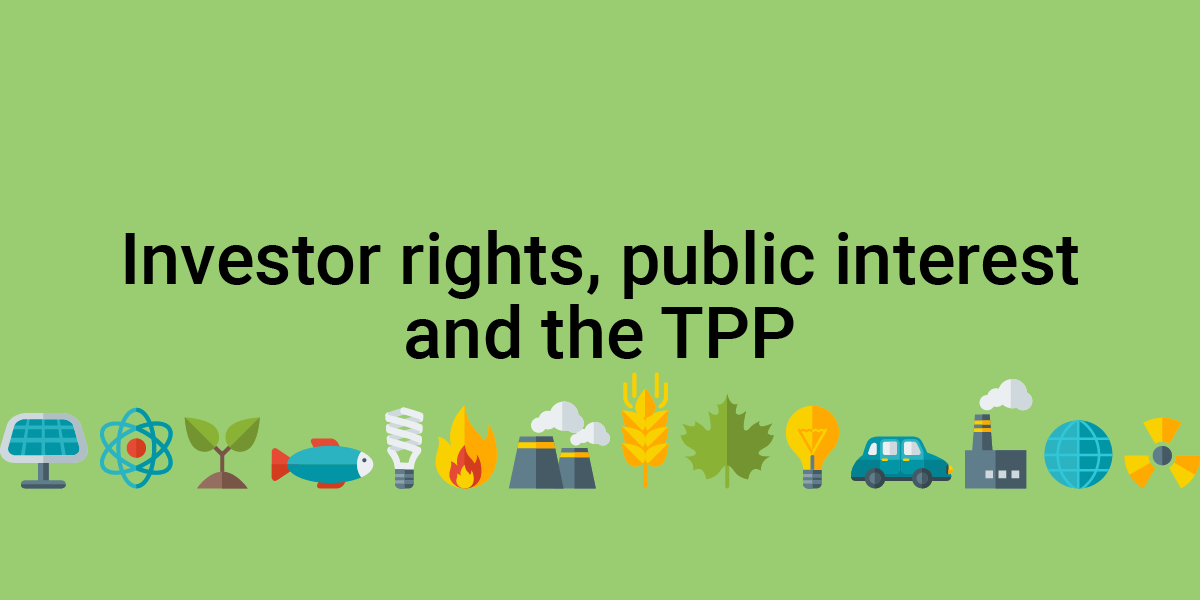 With today’s announcement of a completed Trans-Pacific Partnership deal, it’s likely the news will focus on potential economic impacts in sectors like dairy and auto. These are certainly important questions, but so are the details buried in the TPP’s more than 30 chapters, including one on investment protection.

For example, public health advocates got some good news last week when it was revealed that tobacco control regulations might be safe from the TPP’s strict investment rules. While the text falls short of a full carve-out, it means any of the 12 member countries can opt out of investment protection rules with regard to tobacco control measures, such as requiring health warnings on cigarette packaging.

The opt-out comes in response to tobacco companies abusing the investor-state dispute settlement (ISDS) mechanism in other free trade agreements. Phillip Morris, a multinational tobacco company, has sued governments from Australia to Uruguay for cigarette packaging laws, which the company claims are discriminatory. TPP negotiators have recognized that investor rights should only go so far when public health is on the line.

Or have they? Hidden in this good news is a troubling question: if activists had to fight just to get tobacco carved out of the deal, what else is being left on the table? Here are three areas where multinational corporations and foreign investors will still be able to sue governments under the terms of the TPP.

Environmental protection Earlier this year, the Canadian government was successfully sued through NAFTA’s ISDS mechanism by Bilcon, a U.S. company, for declining the miner’s application to open a quarry in Nova Scotia. A federal-provincial review panel had rejected the quarry on environmental grounds, but NAFTA arbitrators decided that the investor had been treated unfairly and ruled in its favour. Compensation may reach $300 million. One of the arbitrators in the case admitted the decision was a “remarkable step backwards in environmental protection” in Canada.

Government actions taken to protect the environment are square in the ISDS crosshairs, despite official assurances to the contrary. The TPP opens the door to more cases like this in Canada and abroad.

Intellectual property The Canadian government is currently being sued through NAFTA by Eli Lilly, an American pharmaceutical company, for invalidating the firm’s patent extensions on two mental health drugs. A Canadian Federal Court decided in 2010 that the patent extensions had not delivered the promised benefits and the drugs should therefore be opened up to generic competition. Generic drugs significantly reduce the cost for end users, but Eli Lilly cried foul and launched an ISDS claim against the government demanding US$500 million in compensation for lost profits.

The case is still in progress, but regardless of the outcome we can expect the TPP to lead to similar ISDS disputes. Powerful multinational pharmaceutical companies will use any available means to cling to over-priced drug monopolies. Greater intellectual property protections in the TPP will give these companies an even stronger quasi-legal basis to sue governments and crowd out generic competition.

Local development In another NAFTA ISDS case earlier this year, the Canadian government was successfully sued by Exxon-Mobil, the world’s largest and most profitable oil and gas company, for requiring that a small amount of the company’s revenues from Canadian oil be spent within Canada on research and development. Exxon claimed that this “performance requirement” was banned under NAFTA. The arbitration panel ruled in its favour, awarding $17.3 million in compensation.

Once again, this NAFTA case illustrates what is possible through ISDS. Even more local development measures may be put on the chopping block if the TPP is signed.

A smoking gun An opt out for tobacco wouldn’t be necessary if the ISDS mechanism in TPP didn’t threaten public interest regulations in general. By including it, negotiators have tipped their hand, implicitly admitting how harmful these investor rights really are.

The list of ISDS abuses under NAFTA and other FTAs is already intolerably long. Expect it to get longer if the TPP is signed.