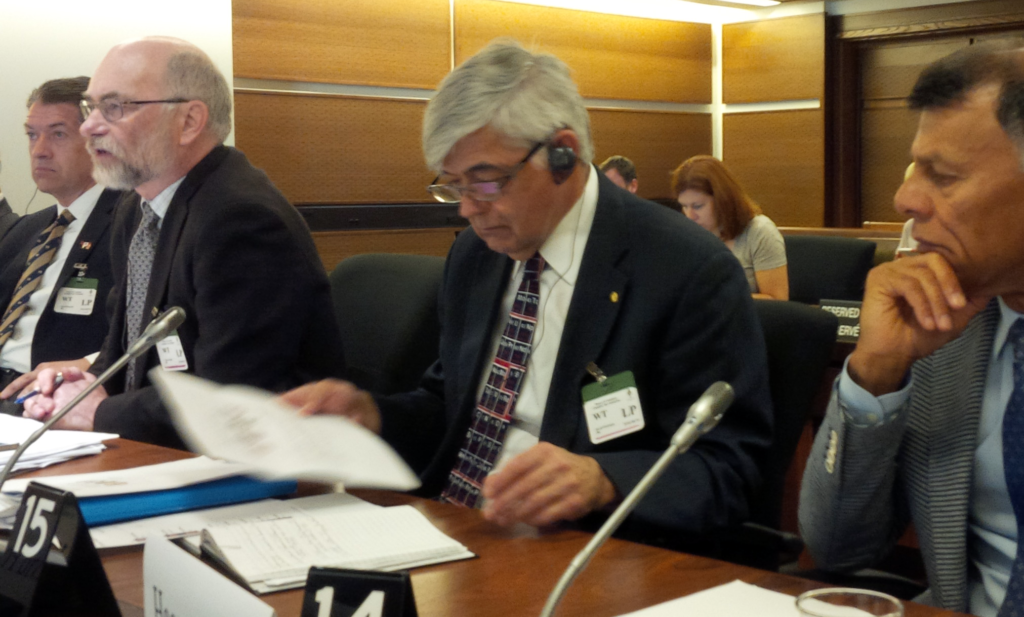 I appeared yesterday at the parliamentary committee on international trade alongside Hassan Yussuff and Angella MacEwan (Canadian Labour Congress), Gus Van Harten (who just released a report for the CCPA on investor-state dispute settlement), and Victoria Owen and Susan Haigh of the Canadian Association of Research Libraries. For once, at least, the critical voices on the witness panel outnumbered the TPP advocates, who were represented by the cattlemen’s association and the chemical industry association.

We learned yesterday that the deadline for public submissions to the committee has been extended to October 31, which presumably means it will not be reporting on the results of its consultation until early 2017, after the dust has settled from the U.S. elections and a new administration takes office. There is still some risk that the Obama administration will try to push the TPP through in the lame-duck session of Congress. But the Canadian government’s decision to take its time studying the TPP is welcome news for all who have been arguing that it would be foolish to take a single step toward ratifying the TPP until its still-murky fate in the U.S. is perfectly clear.

For the record, here’s what I focused on in my presentation to the committee. You can find detailed reports on these and other consequences of ratifying the TPP in the CCPA report series, What’s the Big Deal? Understanding the Trans-Pacific Partnership.

A recent report published by CCPA challenges claims the TPP will generate significant trade benefits for Canada. The reasons are straightforward. Canada imports significantly more from TPP countries with which we do not already have an FTA than we export to them. The quality of that trade is also imbalanced: our exports are mainly unprocessed and semi-processed goods, while the imports are mostly more sophisticated manufactured and higher value-added products.

Since what we import from these countries currently faces higher tariff protection than what we export, tariff elimination under TPP will likely worsen Canada’s existing trade deficits with non-FTA TPP members. It will also deepen our dependence on natural resource exports at the expense of our manufacturing sector. These findings are broadly consistent with the results of other studies, including those carried out by Tufts University and the C.D. Howe Institute, and with Canada’s experience under the recently signed FTA with South Korea.

Canada’s experience under NAFTA confirms this. Over the past two decades, Canada has become the most-sued NAFTA party, and is now the most-sued developed country in the world. Two recent losses are particularly disturbing.

The 2015 Bilcon award, which found fault with an environmental assessment recommending against a quarry on the Bay of Fundy, will exert a detrimental chill over future environmental assessments. Another NAFTA tribunal awarded Exxon Mobil an initial $19 million in compensation for having to fund local research and development as part of an agreement all companies make to drill for oil and gas offshore from Newfoundland and Labrador. As long as the R&D policy remains in place, the federal government must pay ongoing damages.

TPP not only expands this deeply flawed ISDS system to investors from more countries, it includes new investor rights to enforce P3s and other investment agreements with the federal government and to challenge financial regulation. Significantly for Canada, the TPP does not replace NAFTA’s investment protections but will exist alongside them, giving investors the option to use the agreement most favourable to them (and least favourable from a public interest regulation perspective) when challenging Canadian policy.

Intellectual Property Rights and the cost of drugs

Both CETA and TPP would require the federal government to extend the term of patents to account for supposed regulatory delays in approving drugs for sale. Canada already has an industry-friendly system for protecting pharmaceutical patents, reflected in the fourth highest drug costs (per capita) in the OECD. Meanwhile, R&D levels in Canada have fallen to historic lows.

Research published by CCPA estimates that by further delaying the availability of cheaper generic medicines, TPP’s patent term adjustment system would result in an annual cost increase of $636 million, or 5% of the annual cost of patented drugs in Canada, beginning in 2023.

As you have heard in previous testimony, the devil will be in the details of implementation. In effect, TPP gives the USTR (a long-time critic of Canadian intellectual property laws) a seat at the implementation table, since the U.S. must certify that a TPP member is fully compliant before the treaty enters into effect.

In any event, the agreement would burden the Canadian health care system with higher drug costs while frustrating efforts to find a better balance between needed innovation and the affordability of medicines.

Canada’s TPP temporary entry commitments cover a wider range of occupations and sectors than past trade deals, and the system would be extended to countries such as Australia and Japan for the first time.

The temporary entry system in TPP prohibits countries from applying any form of economic needs test or numerical quota, including Labour Market Impact Assessments. Therefore, Canadian employers hiring migrant workers under TPP will be able to do so even in areas where unemployment is high and qualified local workers are available.

Furthermore, unlike the Temporary Foreign Worker program, which can be reformed, the temporary entry system in the TPP cannot easily be altered once TPP is ratified.

My remarks today only scratch the surface of the issues surrounding this complex and far-reaching agreement. For further analysis, I refer you to the studies on our web site. Future reports will address copyright protection, the auto industry, labour rights and other issues.

Our research strongly suggests the risks for Canada in ratifying TPP, especially the negative impact on our governments’ ability to regulate in the public interest, significantly outweigh the benefits. While certain sectors or groups may gain, the TPP would not be of net benefit to Canada. We therefore recommend against its ratification.

Scott Sinclair is the director of the CCPA’s Trade and Investment Research Project.