Tory Words: Money Where Your Mouth Is?

In this three-part post (Liberals, NDP) I wanted to take a look at what the parties said in their platforms compared to what they are actually spending money on in those same platforms…are they putting their money where their mouth is? For each of the parties I’ve created two wordles or word charts.

It is pretty clear what's on the Conservatives' minds by their "mouth" graph.  "Support" "Stephen" and "Goverment" figure most prominently.  In contrast to both the liberal and NDP "mouth" graphs, the focus is squarely on the leader with the word "conservatives" nowhere to be found in the "month" graph.  After these bigger words, "jobs" , "new" and "tax" are also well used.

When it comes to spending in the "money" graph there are some big ticket items.  Unfortunately in their platform the conservatives didn't provide costing for their crime agenda so I used the Parliamentary Budget Officer's estimates. What is immediately clear is that four programs dominate the conservative plans: program cuts, new jails, income splitting and HST for Quebec.  There are other platform planks but they are barely readable because spending on them is so small. 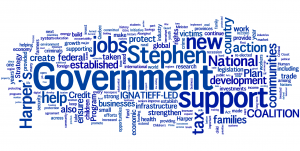 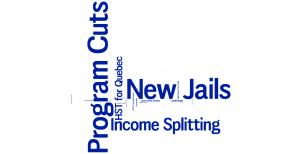