Toronto, you're richer than you think

Toronto’s budget season has begun in earnest, and it’s yielding a mix of the predictable “we can’t afford things” debate, along with some refreshing surprises.

Refreshing: Mayor John Tory is clearly signalling a desire to break from the recent past with the 2015 budget. His announcement on improvements to the TTC and his focus on the value of service improvements at his budget press conference this morning are a welcome breath of fresh air.

His willingness to rethink a campaign commitment to a TTC fare freeze, in light of evidence, was also a welcome development. Many families will breathe easier knowing their children aged 12 and under will be able to ride the TTC for free. The decision to increase TTC fares by 10 cents for everyone else, however, could be abated if city council was more willing to draw on the unique taxation powers it has at its disposal under the City of Toronto Act.

Our report, Toronto’s Taxing Question, outlines how a mix of alcohol, cigarette, entertainment, and other municipal taxes could yield more than $600 million in additional revenue.

In other words, there is no need to starve vital public services – from public transit, to affordable housing and subsidized child care – because the city is broke. Toronto is richer than it thinks. It’s simply been lacking the political will to exercise the revenue tools right there at the city’s fingertips.

Starting with the property tax. Toronto’s property tax hasn’t been rising to reflect inflation and population growth – which neighbouring GTA cities have been doing for years.

The mayor says he’s willing to raise residential property taxes by 2.25 per cent, but does that go far enough?

Total property tax revenues for the city will increase by only 1.83 per cent, including the 0.5 per cent increase needed to fund the political folly of the Scarborough subway. When it’s all said and done, Mayor Tory’s proposal is to increase property tax revenues by just under half a percentage point more than in former Mayor Ford’s last budget. This is clearly below inflation and population growth, as the following chart illustrates. 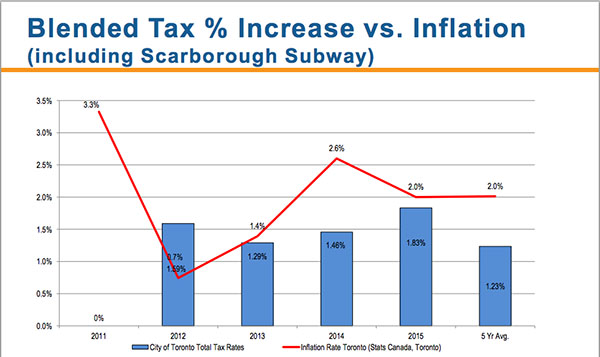 The city has more elbow room on property taxes than is reflected in the mayor’s opening volley.

But what of other tax options?

In an interview on CBC’s Metro Morning with Matt Galloway this morning, the mayor dismissed the possibility of exercising the city’s powers to increase revenues under the City of Toronto Act. His reason for inaction? He said city staff had raised concerns about the viability of an alcohol tax, saying it would cost more than the city would take in. This isn’t correct: our estimates updated older city estimates, which took into account administrative costs, price elasticities, and tax avoidance elasticities. The city would take in millions more than it is today, if it chose to.

However, if the mayor rejects an alcohol tax, we estimated revenues from five other options under the City of Toronto Act from which he could choose. The total list of tax options could raise up to $444 million, which is nothing to sneeze at, especially considering the need for better public services in Canada’s largest city.

There is no time like the present to act on those powers. Even city staff agree:  the City Manager has indicated that Toronto has a revenue problem rather than a spending problem and that savings from efficiencies are tapped out. It’s the end of the gravy train, folks.

Mayor Tory can take the city budget and Toronto itself a giant leap forward. The budget that was released today is an opening position but it’s not the last word.

City councillors, residents, and staff now have the opportunity to work with the mayor to do the right thing for Toronto’s future: exercise its revenue-raising potential to build a truly great city.