To fund a just recovery, we can learn from our fiscal past

As several provinces have begun to loosen lockdown measures, thoughts turn to what Canada's recovery will look like. WilI the massive disruptions we are experiencing spur a reevaluation of priorities and lead to paradigm shifts in our social and economic systems¹? Or will we embrace a ‘business as usual’ recovery model, centred on corporate bailouts as in 2008²?

Some groups are already calling for cuts to “wasteful spending” and sounding the alarm about soaring deficits. Others point out that levying taxes on the fortunes of our most well-off could help finance emergency spending now, and support a bold recovery package in coming years. Indeed, a recent national poll shows broad support for the implementation of a tax on Canada’s wealthiest citizens. While there is always opposition to any ‘new tax’, this is really not a very radical proposal. Looking to our own past, we find examples of how a progressive tax system managed to curtail inequality while funding key public programs.

I am a member of Resource Movement, a group of young people with wealth and class privilege advocating for economic justice. Many of us come from families in the top 10%, 1%, and even the top 0.1%. We are calling for the implementation of a progressive wealth tax along with an inheritance tax targeting only the wealthiest 10%. Alongside other groups demanding fiscal reform³, we believe that a return to a more robust, progressive tax system could help curb growing inequality and provide billions of dollars⁴ for much-needed public services. Further, a progressive wealth tax ensures our ability to leave the current crisis and re-emerge to a more just, equitable society than the one we knew pre-pandemic.

Growing Inequality Since 2000 While we’ve all been affected by the current crisis, we are not all affected in the same way or at the same magnitude. Those of us who were well-off before the pandemic have enjoyed relative safety and security throughout this crisis. Most of Resource Movement’s members, like myself, have been able to retain salaries, enjoy secure housing, and rely on ample savings to bring in food and other items while self-isolating. Most people are not so lucky. Roughly 3.4 million Canadian households who rent and rely on wages or salaries as their primary source of income have less than one month’s worth of savings, and over a million have less than two weeks’ worth. They do not have the means to weather this storm as the months—and bills—keep adding up.

These disparities are not the result of COVID-19 alone; they have been growing for decades. Over the past 20 years, those at the bottom end of Canada’s wealth distribution have seen their net wealth stagnate, while the top 20% have seen their wealth continue to grow (Fig. 1). By 2017, the richest 20% owned about half of the country’s total wealth, leaving the other half to be divided among the remaining 80% of the population⁵. As of 2018, Canada’s richest 87 families had a combined net worth of $259 billion⁶, equal to roughly 15% of the country’s GDP for that year⁷. 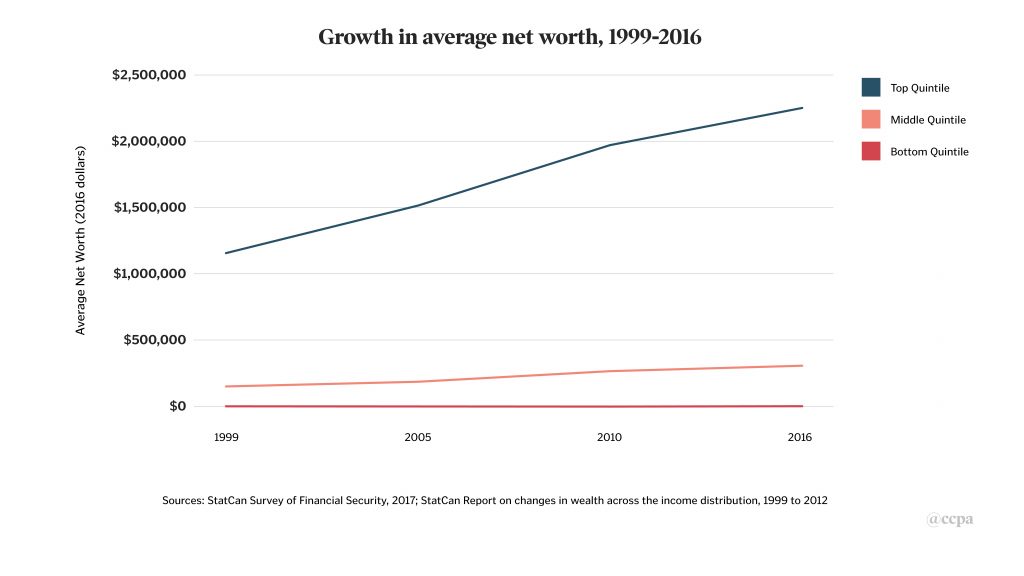 Long before COVID-19 reached Canada, nearly 5 million of the country’s residents were living in poverty while millions more struggled with low incomes, precarious work, poor health, and lack of access to housing and food⁸. The public services that could alleviate these challenges, meanwhile, were being cut in the interest of balanced budgets⁹. How did we get here?

Our Increasingly Regressive Tax System Wealth distribution in Canada was once much more equitable than it is today. In fact, the share of wealth held by the richest citizens actually declined in the decades following WWII¹⁰. This was due in part to more progressive tax policies, which worked to limit inequality and helped finance some of the government's major spending programs including universal healthcare, the national Unemployment Assistance program, and several public housing projects¹¹. Income tax in particular was much more progressive at this time, with many tax brackets and rates topping out at over 80%¹². There was an estate tax and succession dues levied on the transfer of valuable property.

Income taxes remain one of the few progressive form of taxation in Canada¹³, though they have become increasingly regressive over time. Starting in the 1970s, the number of income brackets was diminished and top rates were sharply reduced. By 1988, there were only three brackets, ranging in rates from 17% to just 29%. The top combined (federal and provincial) marginal tax rates, which rose sharply after WWII, began to fall precipitously during the 1970s (Figure 2). While there has been a return in recent years to a somewhat more progressive system—5 brackets ranging from 15% to 33%—this is still a far cry from the post-war period. Canadian fiscal policy has, quite simply, regressed. 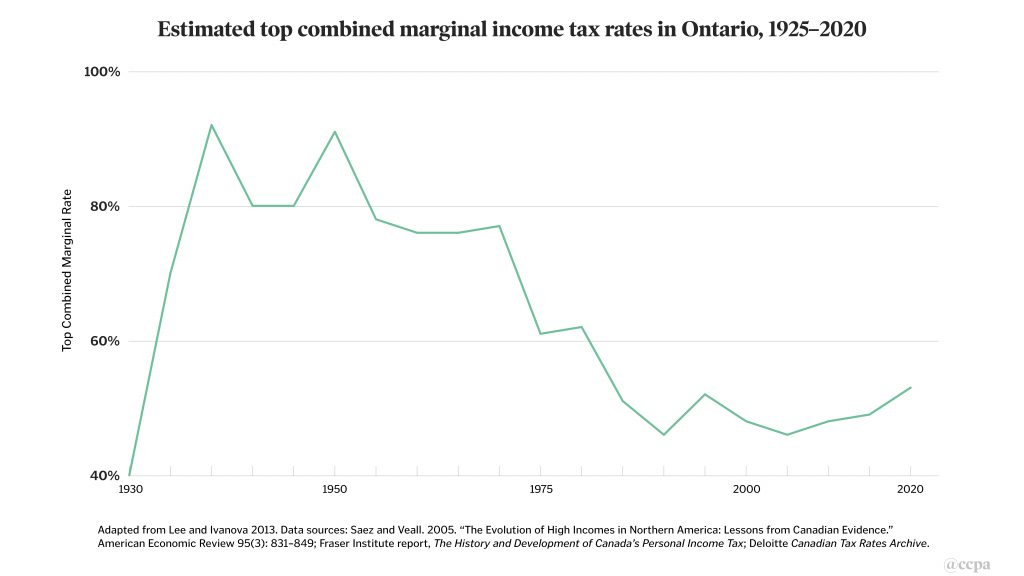 How Do We Progress From Here? Income is only one part of the story. More and more, the country’s richest citizens are drawing their fortunes from other forms of wealth¹⁴—financial securities and high-value property, among others. Yet, Canada’s tax system has not adapted to this new reality, as these assets are generally subject to very low rates of taxation, if they’re taxed at all. In short, over the past few decades we’ve seen income tax rates shrink, other forms of wealth remain largely untaxed, and, unsurprisingly, wealth inequality has skyrocketed. Introducing wealth and reintroducing inheritance taxes can begin to address this gap in our fiscal system.

Many of us in Resource Movement have benefited personally from the country’s regressive tax system, allowing ourselves and our families to accumulate massive amounts of wealth. Meanwhile, millions of Canadians have been pushed into working poverty, with stagnant wages and growing household debt. To a growing number of Canadians¹⁵, including members of Resource Movement, this is simply unfair.

Introducing wealth and inheritances taxes is not a catch all solution. However, developing a progressive taxation system is a critical component of dismantling our growing inequality. Combined with other measures like closing corporate tax loopholes and introducing digital services and excess profits taxes, these taxes can ensure that the Canada we re-emerge to a more equitable future.

³ E.g. Canadians for Tax Fairness, who are demanding the removal of tax shelters that disproportionately favour the wealthy, the Centre for Policy Alternatives who are calling for the elimination of tax breaks for major multinational corporations and the fossil fuel industry, and the Broadbent Institute, working to identify and eliminate unfair tax loopholes.

⁴ A Parliamentary Budget Office report concluded that a relatively modest 1% tax on all wealth above $20 million would bring in over $9 billion a year to federal coffers.

⁵ StatCan report on the distribution of household wealth, modified 2018-03-22

⁷ According to the World Bank.

¹¹ A useful summary is provided by Moscovitch, Allan, "Welfare State". In The Canadian Encyclopedia. Historica Canada. 2019.

¹³ Marc Lee and Iglika Ivanova, 2013. “Fairness by Design: A Framework for Tax Reform in Canada”. Canadian Centre for Policy Alternatives.

¹⁵ Polls from before and during the pandemic show wide support for the introduction of a wealth tax, and a petition for Resource Movement’s proposed wealth and inheritance taxes received over 11,000 signed in the first week after its launch .

Daniel Hoyer is an historian based in Toronto/Tkoronto, working as project manager for Seshat: Global History Databank and part-time professor at George Brown College. Coming from a background of wealth and privilege, he has been a member of Resource Movement since 2018.