When federal Finance Minister Bill Morneau tabled his 2017 federal budget in March, he pledged to make Canada’s tax system fairer. To his credit, he has closed several of the smaller tax credits in the past two budgets, but this hasn’t made a dent in how unequal the tax system is.

If he wants to make the system truly fairer, he has to tackle the big fish in an ocean of tax credits, tax exemptions, and tax loopholes that are stacked in favour of corporations and Canada’s richest 10 per cent.

This cash cow for the wealthy comes at a great expense to the rest of us—costing $203 billion dollars a year in lost federal revenue, according to a recent report on preferential tax treatment from the Canadian Centre for Policy Alternatives. 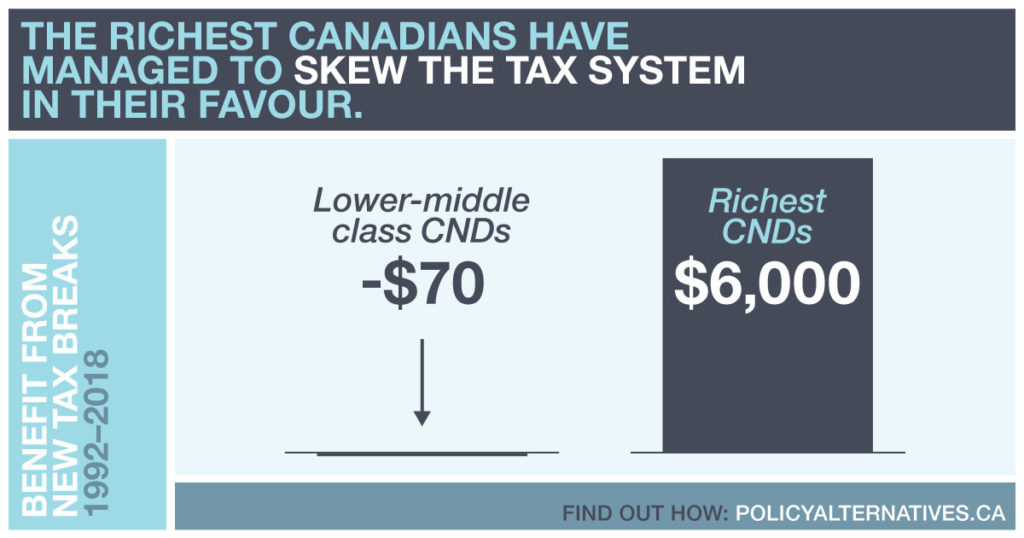 We could use that money more wisely to benefit all Canadians, from those who are struggling and including the country’s top earners.

We could wipe out poverty with that money. We could end homelessness. We could provide affordable universal child care. We could make university tuition cheaper.

“When some—usually the very wealthy—are not paying their fair share, that leaves less money for the services we all need,” Morneau himself said in a May speech on tax fairness before the Toronto Region Board of Trade.

But instead of investing in these kind of visionary programs, a succession of Canadian governments have been making our federal tax system less progressive by giving preferential tax treatment to corporations and rich Canadians.

Corporations, for instance, enjoy preferential tax treatment when it comes to capital gains income, which will amount to $6.4 billion in foregone federal revenue in 2018—an increase of 830 per cent since 1992.

For $6.4 billion, we could easily afford a universal affordable pharmacare plan and probably have money to spare.

For $6.1 billion, we could cut Canada’s poverty rate in half within just four years, we could bring everyone to within 75 per cent of the poverty line within two years, and we could tackle homelessness.

We know income inequality is a stubborn problem in Canada, but instead of investing in public programs to close the gap, the federal government has been throwing away billions of dollars on tax breaks for those who are least in need.

The richest 10 per cent get 42 per cent of the federal money spent on tax expenditures—up from 36 per cent in 1992.

The richest 10 per cent of Canadians enjoy an average of $20,500 a year in tax exemptions, credits, and other loopholes. That’s $6,000 more than in 1992 and it costs the federal government $58 billion—double what it paid in tax expenditures in 1992.

The cost to the federal government for all preferential personal income tax treatments, not just for the rich, has ballooned from $90 billion in 1992 to a projected $152 billion in 2018. That’s a 69 per cent cost increase since 1992.

While Finance Minister Morneau was delivering his budget speech in the House of Commons last March, a panel of 54 Canadians were giving feedback to Nielsen, a market research firm, on what they thought about this year’s budget promises.

They were most enthusiastic about Morneau’s promise to make Canada’s tax system fairer, according to CBC News.

Doing so isn’t just about restoring progressivity to Canada’s income tax system. This is about taking a clear-eyed look at how Ottawa has been prioritizing tax expenditures that disproportionately benefit a few at the expense of the many.

Meanwhile, government after government puts off making proper investments to ensure clean water and decent housing on Aboriginal reserves as well as delaying bold action on poverty reduction and homelessness.

In some Canadian cities, some working families are paying the equivalent of a second monthly mortgage just to get their children in child care.

Millennials are being asked to pay record-high tuition in order to get a university degree, only to graduate with record-high student debt and limited work opportunities.

The case for closing tax loopholes, shutting down tax credits and exemptions tilted heavily in favour of the rich and corporate Canada is really about diverting that money to pay for programs and services that benefit everyone—even the rich and corporations, because they benefit from a healthy, well-functioning society.

The federal government is in the midst of reviewing tax expenditures. It has a real opportunity to restore fairness to the system and to make more meaningful, lasting investments with our money. It’s time for bold action.