Three Things You Need To Know, Going Into This Year’s Federal Budget

1. Canada’s Response to the Recession Not Best In Show, Economically Speaking

We’ve heard a lot about how Canada fared better than other nations during the global economic crisis. That’s because our economy was firing on all cylinders going into recession in 2007, the year before the crisis hit.

In fact, we entered this recession from a stronger economic position than the beginning of any other major recession since World War II. 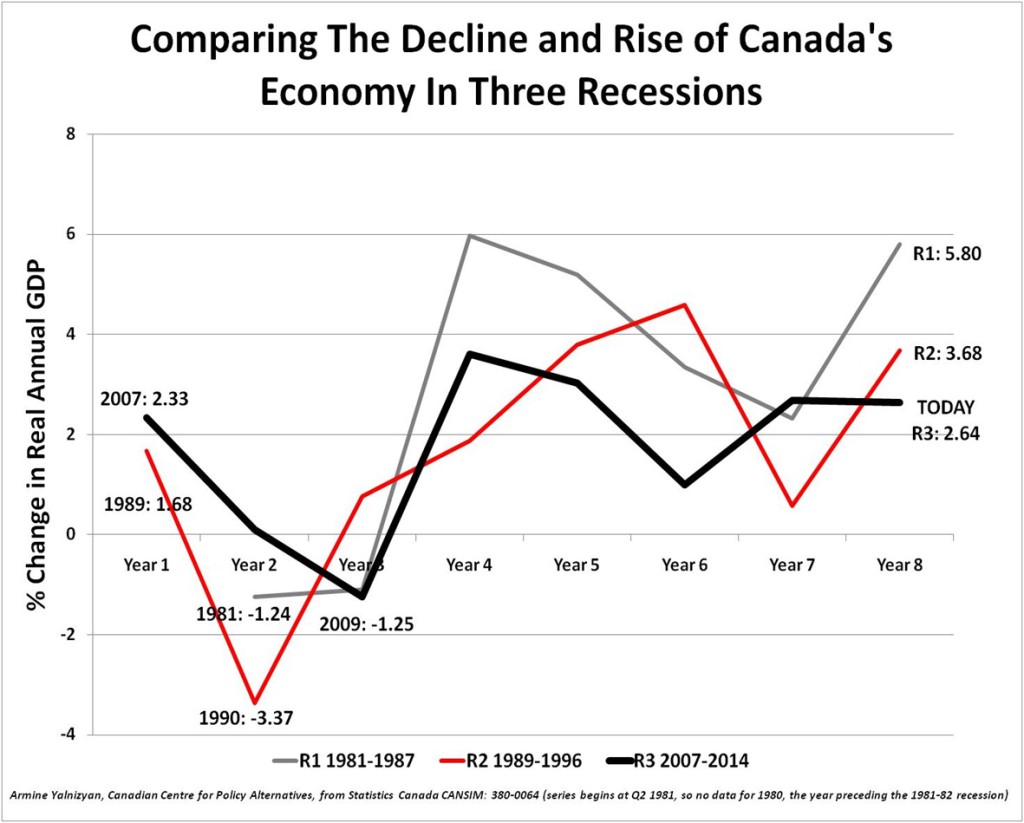 Rather than providing strong economic management, the federal government promised $20 billion in tax cuts over two years, quickly eroding an inherited federal surplus of $13.8 billion and unnecessarily deepening the deficit when hard times came. Continued tax cuts, in good times and bad, have reduced our ability to manoeuvre in recent months, as oil prices collapsed.

2. The Bank of Canada’s Economic Forecast: Slowdown Ahead

The global economy is stuttering, with the IMF continually downgrading its outlook for growth. 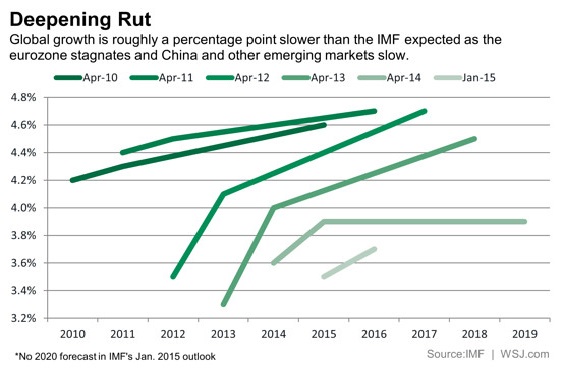 Canada now finds itself in the same boat, with the Bank of Canada Monetary Policy Report downgrading growth for 2015 in each of the past three Aprils. 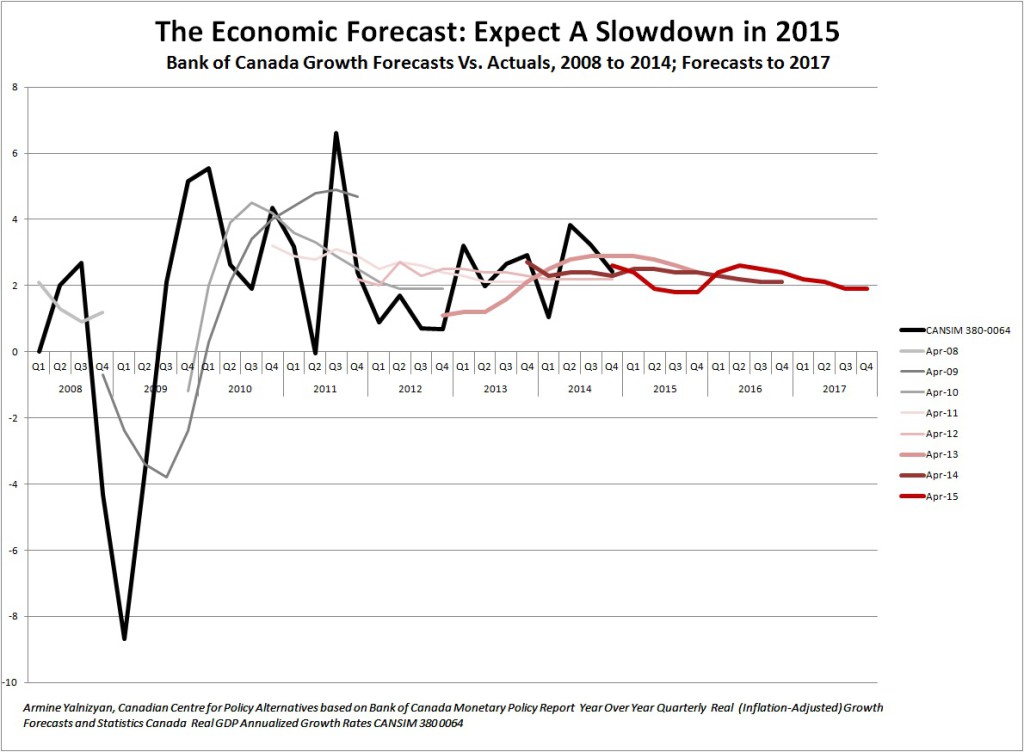 If ever an Economic Action Plan were needed, it’s now. Until this year the Plan was based on $100 oil. What’s plan B?

All we’ve heard about are tax cuts and an emphasis on trade. That’s not enough to offset slowing growth, and does nothing to prepare us for the real challenges that lie ahead, as population aging collides with already weak demand.

3. Pre-election budgets are a resume for a job opening. Look at what this candidate is saying about itself. 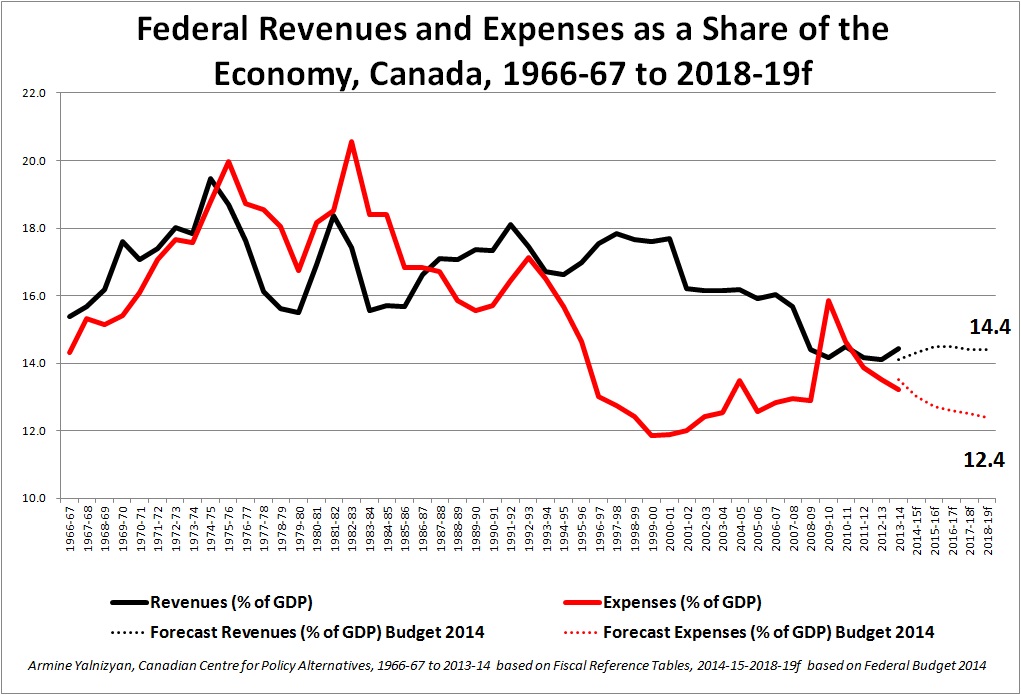 Canadians are dealing with the twin challenges of a $172 billion infrastructure deficit and a looming wave of retirements. This is precisely the time the federal government should be doing more.

Promising to balance the books in this context is like promising to do less. Would you hire a contractor who says they promise to do less to repair your house.....and expects to get paid the same?

Armine Yalnizyan is Senior Economist at the Canadian Centre for Policy Alternatives. You can follow her on Twitter @ArmineYalnizyan. You can also catch Armine on tonight's Big Picture Panel budget discussion on The Exchange with Amanda Lang.