Three hearings on C-51 would have done the trick

Public pressure forced the government to hold nine instead of three public safety committee hearings into the Anti-Terrorism Act 2015 (Bill C-51). With the clause-by-clause review now over (committee spent more than 10 hours yesterday vetoing opposition amendments--all of them), you can see the logic in the original proposal. Just three sessions in, the government would have had enough feedback to gauge the public mood and decide, on balance, what changes to the legislation it could accept for the sake of appearing to respect the democratic process while getting tough on terrorism. In the end there were just four, which the CBC's Kady O'Malley lists as follows:

O'Malley, who has watched more parliamentary business than most of us could stomach, adds, "While it may be tempting for parliamentary power-boosters to pop the champagne at what could be seen as a textbook example of the committee system working as intended, such celebration might be premature."

She noticed the amendments seemed totally detached from the comments of any of the government MPs on committee over the past two weeks. In the case of removing "lawful" from in front of the exclusion of protest actions from a list of threats to the security of Canada (Section 1 of C-51), as a large number of witnesses recommended, O'Malley points out Conservative committee members tried hard, during questioning, to get friendly witnesses to deny there was a problem here. Thankfully these MPs have a hard-working PMO to remind them what they really think on matters as important as national security.

At one point last night, a Department of Justice lawyer, Michael Duffy, was clear as mud when answering opposition questions about clause 42 of Part 4 (Canadian Security Intelligence Service Act), which relates to warrants CSIS must seek before taking measures to "reduce the threat" to the security of Canada. Section 12.1(3) in clause 42 states,

The Service shall not take measures to reduce a threat to the security of Canada if those measures will contravene a right or freedom guaranteed by the Canadian Charter of Rights and Freedoms or will be contrary to other Canadian law, unless the Service is authorized to take them by a warrant issued under section 21.1.

Duffy first said the language was there to protect people's Charter rights, but on further questioning agreed it allows a judge to decide (on the spot, we should add, based only on information from CSIS, which has a record of withholding facts for the purpose of acquiring such warrants) whether the Charter violation in question is reasonable given the circumstances (e.g., stopping a terrorist attack). Lawyer Errol Mendes responded on Twitter this way: 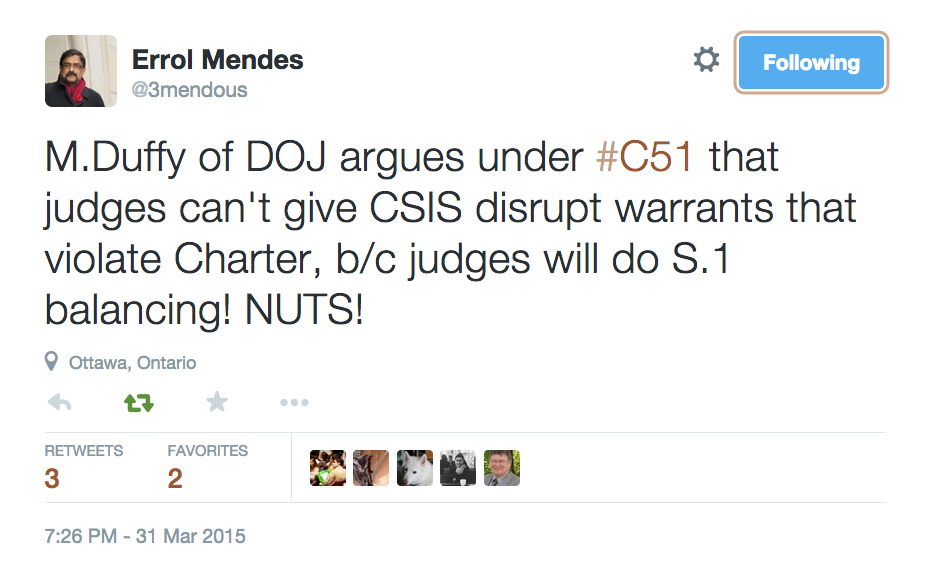 In an Ipolitics.ca column yesterday, professors Craig Forcese and Kent Roach also address the government's position that the warrant clause is "nothing new under the sky," in the words of Public Safety Minister Steven Blaney during Monday's first Senate hearing into C-51. They write:

This is an astonishing category error... we have never had Charter breach warrants before. Analogies to search warrants, or arrest warrants, or various procedures in criminal trials closed to the public (but not the accused) are false – equivalent to pointing to the existence of a bushel of apples to defend the slicing of an orange.

Opposition efforts to remove or amend this and surrounding sections on CSIS's new powers to disrupt, to take out the ability to request permission from a judge to breach someone's Charter rights and to specifically prohibit CSIS from detaining people in their duties, were shot down one by one last night. The Department of Justice lawyer suggested any change in this language would undermine the purpose of the Act.

“Existing measures have already led to serious violations of the rights of innocent people and the government now wants to introduce new measures notwithstanding the fact that it has not yet implemented the necessary oversight and review mechanisms to protect Canadians,” says Roch Tassé, national co-ordinator of the International Civil Liberties Monitoring Group, one of several human rights and civil liberties advocates to endorse a statement demanding the government repeal C-51.

“The measures introduced in Bill C-51 greatly increase the potential for further national security abuses," he adds. "Before introducing such drastic new measures, the government needs to demonstrate that existing legislation is insufficient and must implement the type of robust and comprehensive oversight and review mechanisms proposed by Justice O’Connor who presided over the Arar Inquiry, as well as create opportunities for greater parliamentary oversight."

Necessary, of course, but on oversight there was nothing. The government stood by its opposition to either increasing the investigative powers and resources of the Security Intelligence Review Committee (e.g., to examine the activities of other government agencies, like CBSA, engaged in national security and counter-terrorism activities) or of creating an all-party committee with security clearance for a similar purpose. John Ivison was told by a senior Conservative MP the government would be fine if such a committee included only Liberals and Conservatives, but adding the NDP and Bloc Quebecois was a problem.

“How can we grant access to the country’s most sensitive secrets to people who want the country to fail [the Bloc] or have no confidence in the entire security apparatus [the NDP]?” asked the unnamed MP.

"This strikes me as wandering beyond partisan arrogance into terrain that is borderline anti-democratic," writes Ivison. "Holding opposition members in contempt is also a violation of democracy and has reduced our governing institution to the status of a Potemkin parliament. It has become a fake legislature designed to fool the tourists and visiting dignitaries Canada retains a vibrant parliamentary democracy."

University of Ottawa professor Michael Geist didn't hold back either in his March 31 blog post.

"Few legislative issues are as important as the security and privacy of Canadians, but the entire hearings were structured to avoid hearing from experts, to asking irrelevant questions, or to bringing in witnesses with scant knowledge of the proposed bill," he writes before presenting "The Bill C-51 hearings by the numbers." It's well worth a read.

The Senate committee on national security and defence will continue its own study of C-51 on Thursday at 1:30 p.m. The witness list isn't online yet, but the Senate is expected to hear from Canada's privacy commissioner and others not asked to present to the House of Commons committee.  There is still time to increase the democratic quotient on this legislative review. But not much.