The Walking Deficit: What lurks beneath tomorrow's Fall Economic Statement 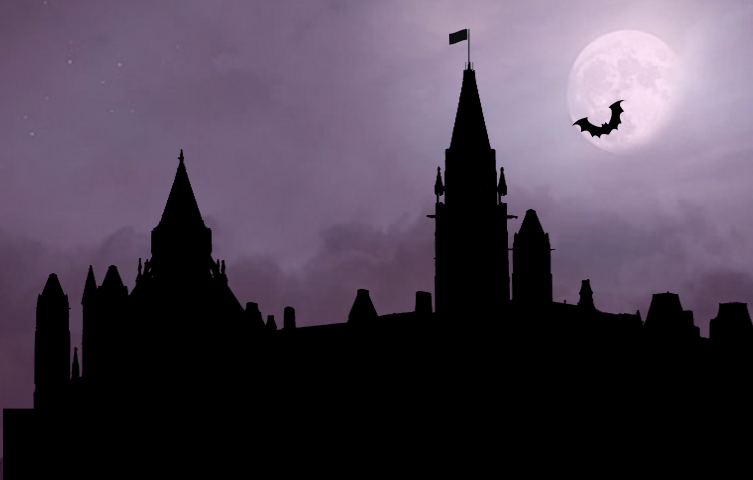 Twice a year, the federal government updates its books; in March when the budget is released; and again in November, half way through the fiscal year. On this All Hallows Eve, it is a perfect time to recount the (barely) scary stories that will be told tomorrow, and the truly terrifying ones that likely will not.

The spectre of federal government deficits is almost certain to be raised by the Finance Minister. We will hear that as of June 30, 2016, the federal deficit was $18 billion for the previous year; for this current year it is expected to reach $29 billion (see Table 1).

But even this supposedly terrifying $29 billion is little more than a childish fright when compared to the consequences of not spending that money: continued undrinkable water on reserves, inadequate investment in First Nations education, and continued high poverty rates for children and seniors.

It’s the deficits accumulated by other levels of government that are hair-raising. Local governments ran a collective $5 billion deficit last year--especially shocking given that they generally operate with very little debt.

Even more terrifying: this past year the provinces, who have been doing the heavy lifting, posted combined deficits of $46 billion. This is double the federal deficit. It also means that the collective provincial debt is higher than the federal government’s for the first time in Canadian history. And this is despite the provinces and cities paying higher interest rates, collecting less in taxes, and not owning the Bank of Canada.

Combined, these government deficits have boosted GDP by $11 billion over the past year, providing a counterbalance to slow economic growth.

The deterioration of trade is also a key ingredient in this economic witch’s brew. We’re importing more than we export, which means that compared to this time last year GDP has been reduced by an additional $23 billion that we’ve exported.

The corporate sector ran a bloodcurdling $64 billion deficit in the past year, three times the federal deficit over the same period. Corporate debt remains the highest of any sector of the economy at $2.3 trillion, which is neither a trick nor a treat.

Yet despite this, the corporate sector managed to drag down GDP by $12 billion in the past year, primarily due to the collapse of investment in the oil sands—an amount which completely negates the $11 billion contribution from government. It may seem counter-intuitive that the sector could take on so much more debt while undermining economic growth, but much of it was spent on mergers and  acquisitions. Corporations borrowing money to buy each other doesn’t count towards GDP, nor is it particularly useful in driving productivity.

But brace yourselves for the most harrowing tale of all: of all sectors, households had by far the highest deficit in the past year and, at nearly $2 trillion, the second highest debt load.  In fact, our otherwise grisly GDP growth this past year has been driven by households, almost half of whose new debts have ended up as spending in the economy. The other half has gone towards purchasing houses, which, like corporate takeovers, don’t count towards GDP.

This presents us with a devil’s bargain: while it is certainly necessary to stop the run up in household debt, doing so—in the absence of stronger government investment—could have devastating consequences for the GDP.

This Hallowe’en, it’s not the spectre of federal deficits that should have us shivering. It’s the levels of debt being piled up by the corporate and household sectors, and the prospect of what it would mean for the Canadian economy—absent sufficient federal involvement to reverse it. That’s the (sugar) crash we need to prepare for.