The US wants a NAFTA deal this month; Canada should say no 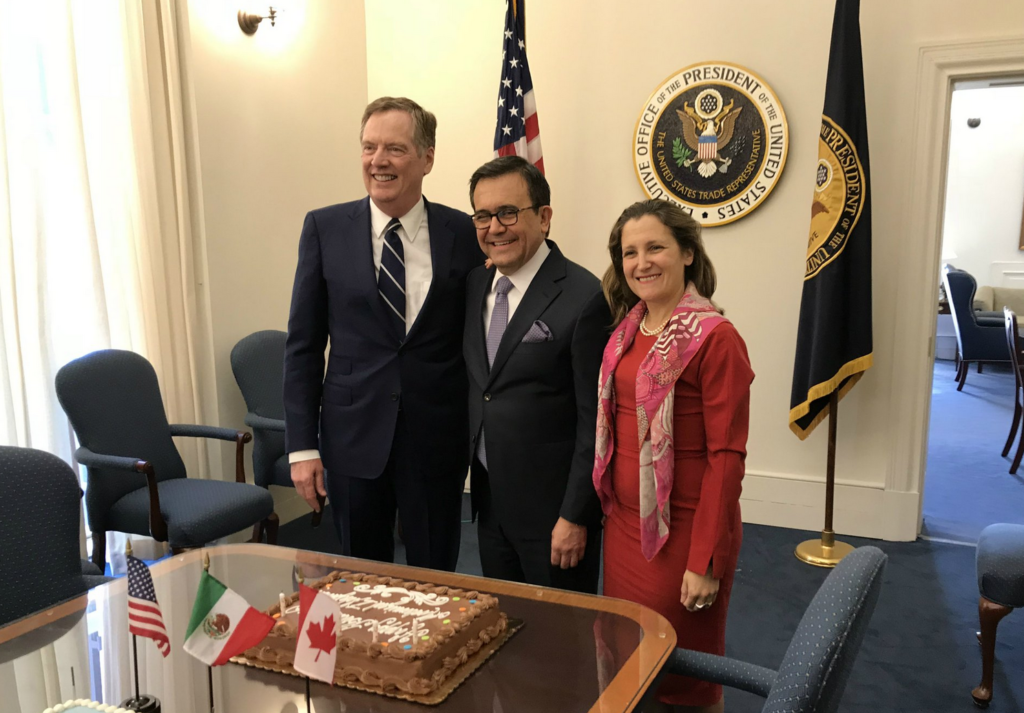 Lighthizer, Guajardo and Freeland feeling the NAFTA love in April.

For the past four weeks, NAFTA negotiators in Washington, D.C., have been working around the clock to reach an agreement in principle before the U.S. and Mexican electoral calendars sideline the Trump administration’s hopes for a speedy deal.

Due to the secrecy surrounding the talks, it’s hard to predict what will happen. But if this marathon negotiating session ends without a provisional agreement, Canadians should breathe a sigh of relief.

The Trump administration wants a deal before Mexican presidential elections in July and U.S. mid-term elections in November. With Democrats poised to make gains this fall, the White House would prefer to have the current Republican-dominated Congress vote on the new NAFTA.

That’s nearly impossible. Supposing an agreement-in-principle can be struck by May 10, U.S. “fast-track” rules require 90 days’ notice before the president can sign off on it. Negotiators would have until early July to finalize the legal text.

Once the agreement is signed (Aug. 8 at the earliest), Congress gets a minimum 135 days to study and debate it (until Dec. 22) before implementing legislation can be introduced. Legislators can then take up to 90 sitting days before voting. So, even if agreement is reached over the next two weeks, the clock runs out before a deal can be voted on this year.

U.S. Trade Representative Robert Lighthizer reportedly wants an agreement-in-principle that goes far beyond the usual ministerial handshake and photo op. His plan has been likened to a “term sheet” of the kind used in the corporate world where executives sign off on all the key negotiating issues. Subordinates then work out the details.

In practice, that would mean an agreement in principle would tie the hands of negotiators and predetermine outcomes on vital issues, even if the NAFTA process drags on.

The U.S. is demanding extreme “TPP-plus” protections for intellectual property, for example, that would dramatically increase the cost of medicines in Canada and undermine the Trudeau government’s commitment to pharmacare and lower brand-name drug costs. The wrong kind of digital trade rules could undermine our privacy rights as well as the competitiveness of innovative Canadian firms.

Canada’s dairy, poultry and egg farmers are rightly fearful of a premature agreement. It would be wrong-headed and heartless—not to mention politically risky so close to an election—to sacrifice these family farms for short-term considerations.

Few details have surfaced about what a new NAFTA holds in store for vital public protections, but Canada’s openness to Trump’s goal of reducing the “regulatory burden” on business, and recently leaked provisions meant to pre-empt front-of-packaging labelling for unhealthy food products, are ominous.

If the Trudeau government is serious about its progressive trade agenda, it makes sense to wait until after July’s Mexican elections to conclude NAFTA’s labour chapter. A new Mexican president will almost certainly be more supportive of stronger labour standards and rights for Mexican workers, who under NAFTA have endured stagnant wages while being denied the right to form independent unions.

The U.S. has reportedly pulled in its horns on auto trade, retreating from its previous insistence on U.S-only domestic content in NAFTA’s rules of origin. But even if agreement on this vital sector is now within reach, it’s unlikely other pieces of the negotiating puzzle, including what to do with NAFTA’s controversial investor-state dispute process, will fall magically into place.

There will be no going back on any concessions Canada makes to get an immediate agreement in principle. If anything, these will become the baseline for future arm-twisting to get a final deal across the finish line.

If standing up for Canadian interests provokes a fit of Trumpian pique and threats of punitive tariffs on steel and aluminum or even NAFTA withdrawal, so be it. Many studies have found that the impacts of NAFTA termination on Canada would be disruptive but manageable.

Canada should not be pushed into unfavourable, permanent trade-offs to meet an arbitrary and likely unachievable deadline. Someone needs to point out the obvious—a signed, sealed and delivered NAFTA 2.0 this year is already out of reach. The emperor has no clothes.

Scott Sinclair is a senior research fellow with the CCPA and director of the centre’s Trade and Investment Research Project.