The Truth Behind Corporate Tax Cuts (in one chart)

Corporate Canada has reached a milestone in 2014. For the first time ever, it is now hoarding more cash than the national debt. What that means is that in one fell swoop, Canada’s corporations could pay off our entire national debt with just the cash sitting in their banks accounts, nevermind their other assets.

Corporate cash hoarding really ramped up as corporate tax rates were slashed in half from 31% in 1997 to 16% today. Corporate Canada argued in the late 1990s that they’d use that extra cash to build more factories, train more workers and make Canada more productive. Turns out … not so much.

Instead we dutifully cut social programs to pay for Corporate Canada to stuff those tax cuts under their gold rimmed mattresses (with memory foam). So far they’ve hoarded $630 billion and counting.

In fact, it appears that Corporate Canada has no idea what to do with the $630 billion they’re hoarding in corporate tax cuts. They’ve passed on making Canada more productive. So while they figure out what’s behind door number two, Canadians are left with weaker health care, veterans care and other social programs. 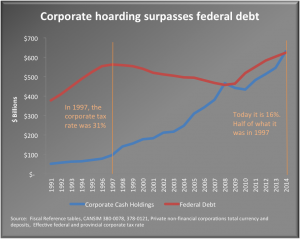