The Taxpayers’ Federation is wrong about SSHRC

Did you hear about the Canadian Taxpayers’ Federation's latest research stunt?

Just before Canada Day - a time when high school graduates are touring university campuses around the country - the CTF slapped a graduation cap and gown on their ubiquitous pig mascot and held a press conference denouncing 'wacky' student research projects that receive public funding from the Social Sciences and Humanities Research Council (SSHRC).

The CTF pointed to seven SSHRC-funded student research projects they found particularly deserving of scorn. “We have looked through some of the published research funded by SSHRC and some of it looks to be of questionable importance. And we eagerly await the publication of other research papers that are still works in progress,” the press release chortles.

Interestingly, the CTF has done very little, if any, follow-up on research topics they found “wonky” in 2004 (which included—horrors!—social tolerance to violence in hockey, and an historical analysis of how society frames its understanding of consent, promiscuity and sexual assault--two topics of ongoing national relevance and concern).

Notably, the CTF is not calling for a more transparent decision-making process in determining which research projects receive funding, or even a revamped appeals process for proposals that are rejected by SSHRC’s decision-making body (which the CCPA and others have discussed in the past).

This media stunt is, rather, a transparent attempt to stir up populist outrage…which presumably will only be mollified by eliminating public funding for touchy-feely, artsy-fartsy research altogether (since parallel programs offered by the Natural Sciences and Engineering Research granting council [NSERC] and Canadian Institutes of Health Research [CIHR] appears to have escaped the CTF’s pig mascot’s indignation).

The current state of public research funding for the Social Sciences and Humanities in Canada A little context might be helpful: last year, SSHRC funded 1,300 Masters scholarships, 430 Doctoral scholarships and 183 Postdoctoral fellowships for a total of 1,913 projects. According to the CTF’s numbers, the seven “offending” topics amount to 0.4% of SSHRC-funded student research projects. We feel a visual representation might be helpful in making this point. 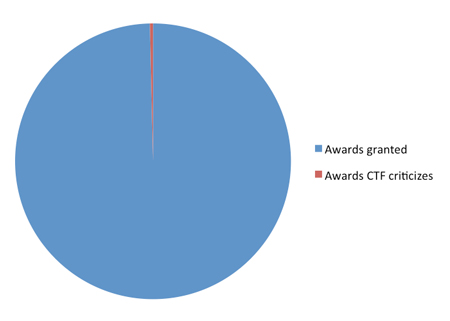 And far from “millions” added to the national debt, these seven so-called ‘wacky’ student research projects only cost a total of $127,500.

The projects provoking the finger-wagging indignation of the CTF relate to sex, women, body piercing, and online gaming, suggesting they're selecting topics with salacious-sounding titles to stoke generational ire, using a fairly predictable technique of inserting a loaded word (in this case: “sex!”) into a news release and waiting for the media to amplify the controversy. 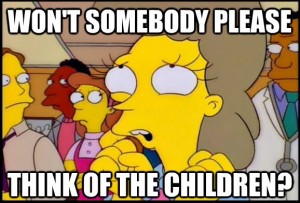 It’s also ironic that many of the topics the CTF has chosen to focus on—sexual assault and rape prevention, violence in sports, gaming, consumer attitudes towards retail purchases—have a decidedly non-wonkish, real-world application; several are currently the focus of both political and policy discussions at various levels of government. And while CTF is entitled to its opinion on the merits of this research, each proposal is evaluated by an expert panel of SSHRC officials, professors and community members.

SSHRC scholarships should be increased, not cut

Content aside, the CTF is not just attacking publicly-funded research but publicly-funded student research. The real question is whether there is value in providing students with funding so that they may learn how to do extended research projects on a variety of topics, in that process gaining experience and skill in the act of doing data-collection and analysis. We think there is value in creating the conditions for students to learn these important skills—that, in fact, we should be investing in these conditions to an even greater extent..

CCPA’s 2014 Alternative Federal Budget proposed increasing the funding for graduate level scholarships at SSHRC and the other two federal research agencies covering the sciences and medical fields. The Canadian Federation of Students has also called for a large increase in research scholarship funding. The simple reason is that, as the tables indicate, the amount of scholarships and research grants Canada gives to students at graduate school hasn’t increased with the growth of graduate enrolment.

One of the main objectives of SSHRC is foster Canadian talent and expertise in the Social Sciences and Humanities, which is why SSHRC offers scholarships to students and requires all funded research by professors to have student assistants. Much has been said about how a higher education level is becoming standard in our economy; for Canada to compete in the knowledge economy, fostering the talent of Canada’s best students with merit-based research scholarships makes good sense from both an economic and public interest perspective. Equally, if we believe that policymaking should be based on evidence, and that we should strive to better understand our society in order to improve it, then publically-funded research that contributes to the public interest should be not only supported but enhanced.

[i] SSHRC data taken from annual reports on each grant program. Enrolment data is from CANSIM Table 477-0019 and is for all fields, not just Social Sciences, Humanities and Arts.