The “Other” Side of the Story

It’s not the unemployment rate.

It’s the fact that more and more prime-age workers are finding themselves working part-time hours simply because they can’t find full-time hours. It’s a fact, but it’s not getting much play.

Here’s what the news release that accompanied the LFS focused on, and what major news outlets covered: a slight bump in employment, accompanied by a higher unemployment rate due to an increase in labour force participation; a bit of good news, a bit of bad news, adding up to mainly worrisome news that Canada’s economic recovery could be “running out of steam.”

But there’s another important set of numbers that aren’t getting the attention they deserve. It’s the table the LFS releases with each cycle to show the reasons part-time workers (comprising one-fifth of all workers in our labour force) give for working part-time. 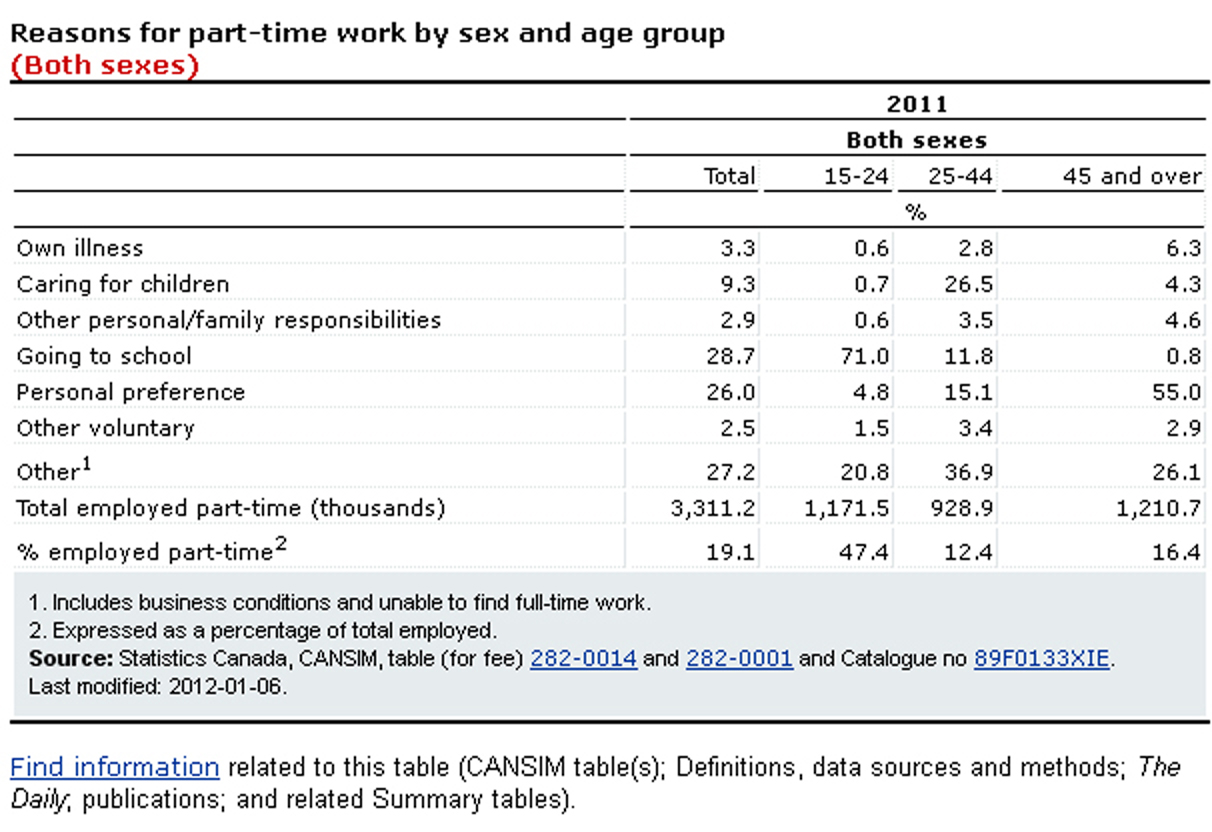 You’ll notice that each of the “voluntary” reasons for part-time work is spelled out in the table. The most common reason for working part-time – largely due to the fact that the under-24 age group pulls the figure up – is going to school (29%). Close by, at 26%, is personal preference – which is why the majority (55%) of the plus-44 crowd of part-timers (that’s right, 45 or 85, you’re in the same category now) work part-time hours. But in between those two high-ranking answers is the seemingly benign “Other” category, with 27%.

What are these “Other” reasons? Oh, just business conditions and unable to find full-time work.

Fully 27% of part-time workers of all ages would work full-time if they could. More strikingly, over one-third of prime-age part-timers – the 25-44 group – work part-time involuntarily, because they can’t find full-time work or because of “business conditions”, which is another way of saying full-time work is impossible to find in their occupational field, at least right now.

What about the thousands of people who are, by virtue of not being able to find a job that will employ them for more than 30 hours a week, under-employed? Why isn’t that part of the story?

The official release from Stats Can does give a nod to the part-time numbers, but only to note that “an increase of 43,000 in part-time work was partially offset by a decline of 26,000 in full-time employment.”

Involuntary part-time work has been rather high for years now. Older data compiled by the Canadian Council on Social Development shows that it increased markedly from 1976 (11%) to 1994 (35%), following the business cycle to some extent, but also increasing independent of economic recessions, recoveries and booms. However, recent OECD data – which appear to be the best source of comparison immediately at hand, given that Statistics Canada does not archive previous summary tables from the LFS online – suggest that the percentage of part-timers who would prefer to work full-time has increased dramatically over the last five years, from 21% in 2007 to 27% in 2011.

If we mined deeper, we might find that most involuntary part-timers are women (as has historically been the case), that there are interesting and meaningful differences between smaller age groups, separating the 20-24 crowd from the 15-19 crowd, and the 25-34 crowd from the 35-43 crowd, and that many who work part-time “voluntarily” would also work full-time if, for example, they had more affordable child care options.

Granted, there are likely people on the other side of the fence too – who work full-time but would gladly work part-time, or work remotely, or choose compressed work-weeks, if they could do it without sacrificing the job security and/or benefits that tend to be found only in standard, full-time employment.

The point is that the numbers we tend to gravitate toward, which grab the headlines and excite or depress the morning radio hosts – the minute, aggregate fluctuations of employment, unemployment and job creation – barely scratch the surface of the bigger story of how people make a living and a life, producing and consuming the things they want and need. It’s the how and the why that should matter. It’s the “other” side of the story.

Karen Foster is a Toronto-based (by way of Nova Scotia) sociologist and writer. She researches and writes about generations, working and earning and social change, as well as marginalized young people and social assistance in Ontario.

This article originally appeared on The Elemental Present.