The lost lessons of Lac-Mégantic 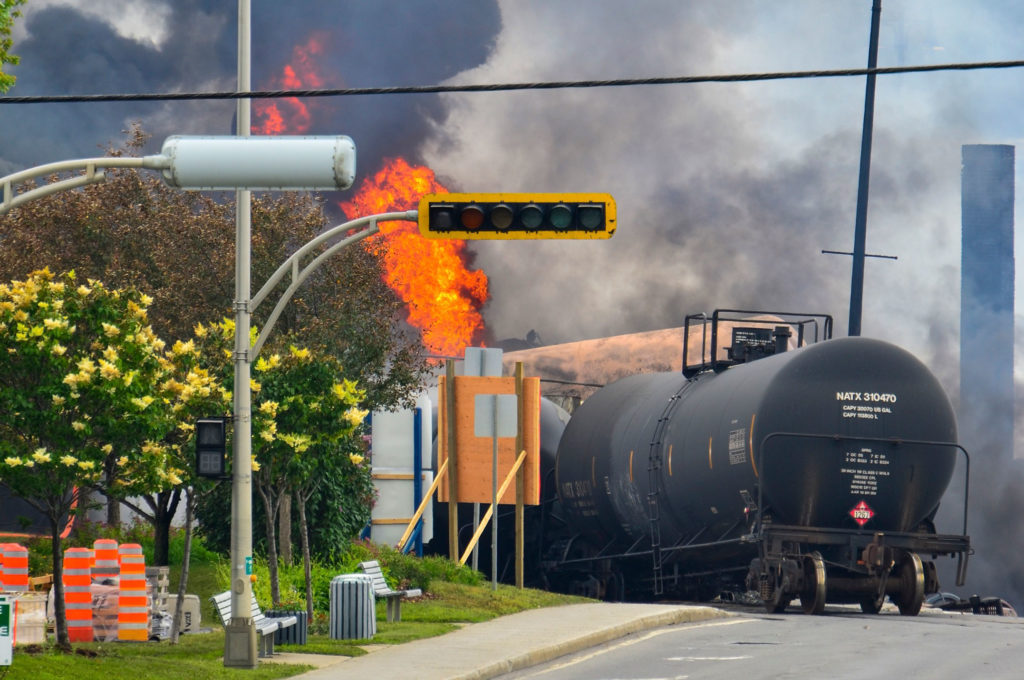 It's been three years since the Lac-Mégantic rail disaster.

It killed 47 people — 49 including two suicides directly related to the tragedy.

It spilled six million litres of crude oil, poisoning the land and waterways.

It destroyed the town centre and traumatized a community.

Combining lives lost, environmental damage and physical destruction, this accident is, outside of wartime, without precedent in modern Canadian history.

Has it led to fundamental improvements in the rail regulatory regime?  Sadly, no.

Massive oil trains continue to run on increasingly overstressed tracks, sometimes at excessive speeds. Train securement issues have not been fixed as evidenced by the increase in runaway trains since Lac-Mégantic.

The strongest tank cars currently on the rails, CP-1232, keep puncturing and their oil exploding — very recently in Oregon.

Tank car fleets have until 2025 to fully replace these models with the newest tank car design, TC-117.  Until then, these unsafe cars will be carrying volatile oil through towns and cities across Canada and the U.S.

Recent increases in inspection resources are being diverted to auditing companies’ safety management systems — a paper exercise.  Consequently, the companies still, in practice regulate themselves, compromising safety when it conflicts with costs.

Relations between Transport Canada and the rail industry continue to be shrouded in secrecy. Company risk assessments and safety management systems are hidden behind a veil of commercial confidentiality.

Communication with municipalities about the nature of dangerous goods travelling in real time through their communities is still problematic. Non-industry groups continue to be marginalized from the rule-making process.

Transport Canada’s regulatory bodies — Rail Safety, Transportation of Dangerous Goods and the Canadian Transportation Agency — have been starved of funding.  The 2016 federal budget allocated $143 million over three years for rail safety. It is a start, but these bodies need to be permanently strengthened to help resist regulatory capture by industry interests — a factor which shaped the rail regulatory regime that failed so catastrophically.

The 2014 Transportation Safety Board report found regulatory breaches at Transport Canada and negligence by the company, Montreal, Maine and Atlantic Railway (MMA). However, it treated Transport Canada surprisingly lightly, raising questions about the industry influence as well as departmental and political involvement in massaging its findings.

Two House of Commons committee reports have not shed additional light on the underlying causes. The settlement of the civil suits has foreclosed an avenue for compelling testimony from those who so far have escaped scrutiny.

Lac-Mégantic citizens’ groups have called repeatedly for an independent judicial inquiry. Their demands have been ignored.

Civil suits — wrongful death, class action and bankruptcy proceedings — were combined into a $460 million settlement. The defendants, including the federal government, contributed to the fund in exchange for immunity from further legal action.

The criminal negligence causing death trial against three front-line employees continues to be delayed by legal wrangling between the defense and crown prosecutors.

That the bankrupt company MMA, is also charged — though not its U.S. parent and majority owner — is salt in the wounds for Lac-Mégantic residents who believe the worst offenders have not been charged.

The federal government continues to hedge with respect to the community’s call for a new rail line to bypass the town centre. Feasibility studies drag on. The Commons Transport Committee has urged the government to accelerate the process.

It should not only commit immediately to building the bypass, it should also finally admit its role in the disaster.

Government and industry have worked over the last three years to restore confidence in the system, but the myth of corporate self-regulation is never fundamentally challenged.

Will the Canadian public be lulled over time into forgetting the consequences of regulatory failure? The people of Lac-Mégantic most certainly will not.

They want to ensure no other community goes through what they have gone through. They want a measure of justice — to know their suffering has not been in vain.

Bruce Campbell is a visiting fellow at the University of Ottawa Faculty of Law, on leave from the Canadian Centre for Policy Alternatives. He received the 2015 Law Foundation of Ontario Community Leadership in Justice Fellowship.

This op-ed first appeared in the Toronto Star.