The house that debt built 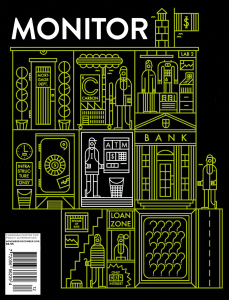 In a speech in May, Bank of Canada Governor Stephen Poloz told a scary story about household debt. No matter how you measure it—as a share of disposable income (170%, a Canadian record), as a share of Canada’s GDP (100%, one of the highest factors in the world)—things look pretty bad. The culprit? Mainly housing. But debt-fuelled spending on other things also contributed to higher-than-expected growth this year in the Canadian economy, a surprise that is “borrowed from the future,” according to one RBC analyst quoted by the Financial Post in September.

Three-quarters of household debt is in mortgages owned by Canadian banks, who are loving the fact that housing is now 1) out-of-control expensive, leading to longer amortization (payback) periods, which makes them lots of money, 2) still attractive to buyers due to low interest rates, and 3) considered an investment in its own right, drawing increasing amounts of speculative buying (and increased speculation in mortgage-backed securities) that reinforces 1 and 2. As Poloz has warned, all of this heightens the risk that mortgage defaults—during another economic downturn, or as interest rates rise—could have systemic repercussions.

This situation becomes scarier when we take into account that interest rates must rise, and fairly quickly, if central banks are going to have any chance of counteracting another major recession. Higher interest on mortgages for ludicrously expensive homes (or speculative second and third condos) could happen gradually enough to avoid mass defaults while potentially cooling prices. But with about 8% of indebted households owning 350% or more of their gross income (representing just over 20% of total household debt), and inflation on the rise led by surging gas prices, the chances of a more painful breakdown are not insignificant.

Housing booms and busts are not inevitable. In fact, they are a fairly recent thing, sparked by rising land values as well as financial deregulation since the 1990s. Many readers will remember those days when owning a home was a ticket to personal or family security, not a retirement nest egg or stepping stone to greater riches. But with real wages averaging annual gains of only 0.3% over the past three years, and just 1% over the previous decade, a debt-financed gamble on an ever-climbing housing market can appear too good to pass up. Until disaster strikes, that is, as it did in the U.S. housing market 10 years ago, with global ramifications that continue to shape national and world events.

We took a very partial snapshot of that world in the last issue of the Monitor. Several features looked at governments’ continued embrace of austerity and privatization—public sector sell-offs and Bay Street–led infrastructure financing—despite evidence that these policies only increase inequality, turning larger and larger numbers of people off our democratic system. In the November-December issue out today, we explore a few ways that people are re-imagining finance to change our banking system, even debt, so that it better serves the needs of people before profit.

John Anderson leads us off with a strong case for postal banking. Canada’s network of post offices is as vast as the country itself. Where bank and credit union branches are pulling out of smaller communities, and even many downtown cores, most of us can still find a post office nearby, often on foot. Imagine being able to do your banking there, too, like in many other countries worldwide. What about low-interest loans (to undercut usurious payday lenders) and mortgages? Can you believe the legislation to make this real is already on the books?

Michal Rozworski looks in more detail at Canada’s slow-motion housing crisis and its intersections with the “spectacular imbalances of economic power” that shape public policy. Cheap credit can be a great leveller, and yet in Canada it is making home ownership far too expensive, and in some cases impossible, for many people by driving both home prices and rents higher.

The federal government is starting to describe housing as a human right and is putting more money into new builds, as past issue of the Monitor have discussed. But if this is to be more than rhetoric, as Rozworski argues, the government will need to substantially increase the stock of affordable housing, more strictly control rent price increases and use taxes to discourage real estate speculation. On this last point, the Trudeau government could seek inspiration from U.K. Labour’s proposed £4,000 levy on second homes.

Other contributors to this issue look at how activist hedge funds are gaming the stock market to fund radical change (page 24), how art can constructively undermine our faith in the current banking and money system (page 29), and whether the public is more or less supportive of financial reform today than before the 2008 crisis (page 16).

The links between real estate speculation, household spending and economic growth must be weakened, and Canada’s inequitable addiction to rising house prices broken. It would be far better if that happened with the help of smart policy than through another devastating collapse.

Stuart Trew is Senior Editor of the Monitor. The November-December issue, Making Finance Work for People, is available for download here. To subscribe to the Monitor, click here.