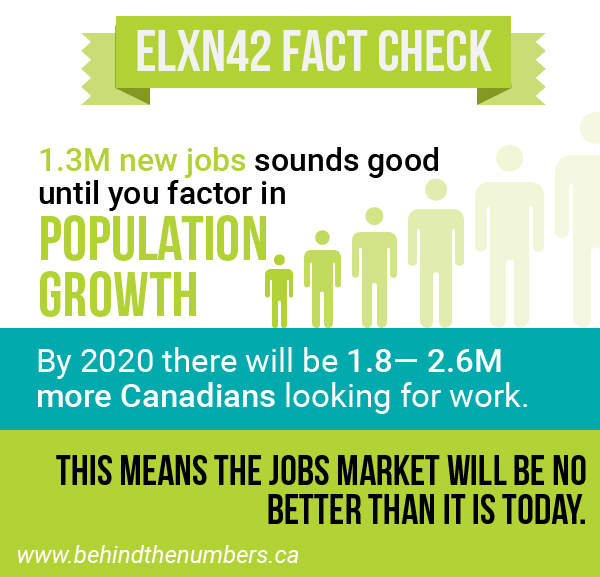 As a CCPA economist, I sometimes feel like I’m constantly providing context to the big numbers governments throw out to impress or frighten us. Is $10 billion a big deficit? Well, if you’re an individual, yes, but if you’re a government with a $2 trillion economy (like Canada’s), then no. So what to make of the Conservative promise to create 1.3 million new jobs by 2020?

First of all, no government gets to claim it “created” every single job that emerged in the economy over its mandate. The best it can do is suggest it “created” those jobs associated with its unique expenditures plus any multiplier effect, say for hiring people on an infrastructure construction site or in an EI office helping people who’ve lost their jobs.

But the provinces spend as much as the federal government does in the economy (depending on how you count transfer payments), and households spend considerably more than both (going into considerable debt to do so). So who gets credit for new jobs? If anything, Conservative claims of having created 1.3 million jobs since coming to power, and promises to do the same again if re-elected, are mostly observations about what happened in the Canadian economy during this time.

A second, more important thing to consider is that although 1.3 million jobs sounds like a lot, it’s much less impressive once you realize there will be between 1.8 and 2.6 million more Canadians aged 15 years and over potentially looking for work in 2020. Statscan numbers help us explain the problem (see Table 1).

The employment rate is the proportion of Canadians aged 15 years or older that have a job. Canada’s employment rate was around 63% for much of the 2000s leading into the 2008-09 recession. It is currently at 61.3%, about the same as it was in 2009 at the worst of the recession. That drop implies the decline in the unemployment rate since the recession is not from people finding work, but in giving up their job searches or not looking in the first place.

But if population growth is at the high end of the spectrum, based on Statscan estimates, producing only 1.3 million jobs by 2020 would result in an employment rate of only 60.4%, much worse than the 2008-09 recession.

I doubt most Canadians would go for the slogan “Five more years of a weak jobs market!” Unfortunately, that’s all this promise would deliver.