The Accessible Canada Act promises a barrier-free Canada for people with disabilities. Will it deliver?

December 3rd marks International Day of Persons with Disabilities, a day when we commit to creating a more inclusive and accessible society for people of all abilities. This year, it coincides with the conclusion of the House of Commons hearings on Bill C-81—the Accessible Canada Act. Introduced last June, this piece of legislation has been decades in the making and marks a significant victory for the disability community.

Across Canada, the majority of discrimination complaints brought to human rights commissions are from persons with disabilities. Close to half of those complaints are about a lack of accessibility. The new Act confirms the rights of people with disabilities to participate fully and equally in society, free from barriers in all areas of federal jurisdiction that hinder their full inclusion in community. This includes built environments, federally run programs and services, banking, telecommunications and transportation that crosses provincial lines.

Is the government listening?

The Accessible Canada Act is a milestone – but clear gaps remain. Leading disability advocates have flagged concerns with the proposed legislation, including the lack of timelines, the broad powers of exemption, the independence of agencies tasked with overseeing compliance and enforcing the legislation and related standards, and lack of attention to the barriers created by poverty and intersectional discrimination.

The HUMA committee report makes no mention of these concerns. Is the government listening? In Canada, existing human rights legislation is robust but it hasn’t been enough to fully—or even partially—address the damaging impact of inequality and discrimination, reflected in high rates of poverty, chronic health problems, economic marginalization, inadequate housing, and acute vulnerability to violence.

Indeed, losses on the income security front have amplified disparities. Stricter eligibility rules and a greater focus on employment in Employment Insurance and other income support programs has heightened economic insecurity. In the last 20 years, we have seen significant growth in the numbers of people with disabilities on the social assistance roles—a trend John Stapleton has called the “welfarization of disability incomes.”

In Ontario, life for people with disabilities is about to get much harder with the new government’s announcement of a stricter definition of disability to access the Ontario Disability Support Program—pushing already vulnerable people into the much poorer Ontario Work stream. (See Ricardo Tranjan’s November 30th blog: Smoke and Mirrors: Gutting social assistance without cutting social assistance rates).

The reality is that Canada is a low spender on income security programs for people with disabilities or those experiencing illness or injury. In 2014, Canada ranked 25th out of 28 OECD countries, spending only 0.8% of GDP on income supports, below the OECD average (2.1%), and even countries like the United States (1.4%).

Chart 1: Public spending on disability programs (% of GDP), 2015 or latest 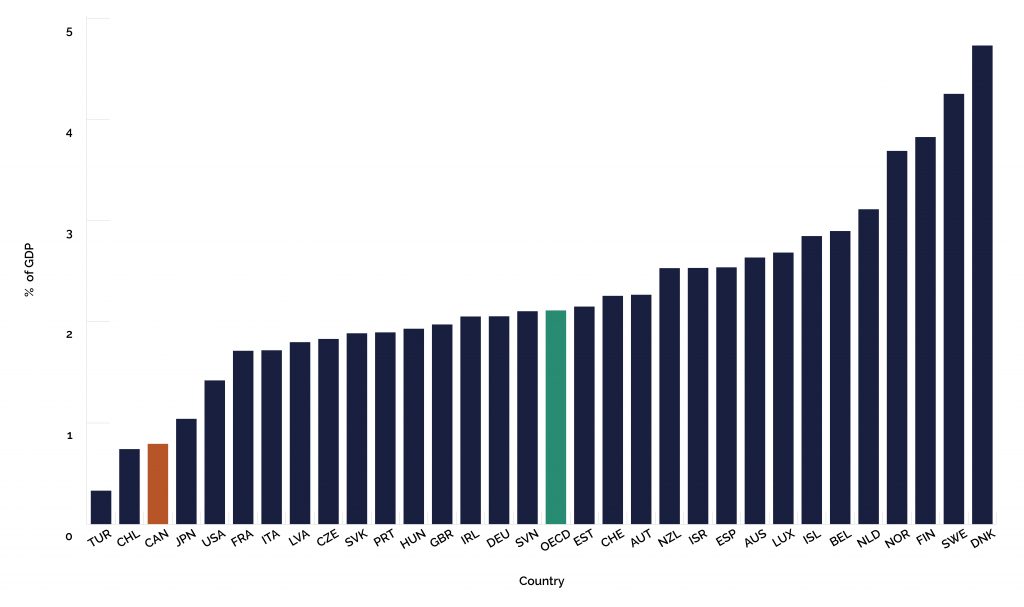 Leave no one behind

For Canada this demands an Accessible Canada Act that speaks to the concerns and priorities of the disability community, that enshrines an inclusive definition of disability aligned with the UN Convention of the Rights of Persons with Disabilities, and that supports the meaningful participation of people with disabilities in creation and monitoring of policies, programs and regulations aimed at the elimination of barriers.

It also demands the level of resourcing required to ensure the success of the new agencies tasked with the creation of standards, public education, compliance and enforcement.

The Accessible Canada Act provides an opportunity to turn disability policy around, to create an action agenda that expands opportunities for inclusive employment, raises abysmally low incomes and lowers the very high cost of necessary supports and devices. An action agenda that leaves no one behind.

Converting the Disability Tax Credit to a refundable benefit, extending the duration of Employment Insurance sickness benefits from 15 to 50 weeks, investing in affordable and accessible housing or introducing a national pharmacare program. Strengthening the proposed Accessible Canada Act. These are all good places to start.

Note: The author uses person-first language in this blog as a reflection of the standard set by Canada's federal government and agencies that work on disability issues.
However, we recognize that this terminology may not reflect the preferences of individuals with lived experience who reject person-first language.