Ten things to know about homelessness in BC

On February 20, the British Columbia government will table its next provincial budget. With that in mind, it’s useful to reflect on the province’s homelessness crisis—along with the various public policy factors that have likely contributed to it.

1. Public operating spending by BC’s provincial government has seen a steady reduction over the past two decades. As a share of Gross Domestic Product (GDP), provincial public operating spending has gone from roughly 22 per cent to roughly 18 per cent during this time. The downward trend was especially sharp during the first mandate of the Gordon Campbell Liberal government (2001-2005); but the trend has yet to be reversed, even with the recent election of an NDP government. All of this is illustrated in the visual below. 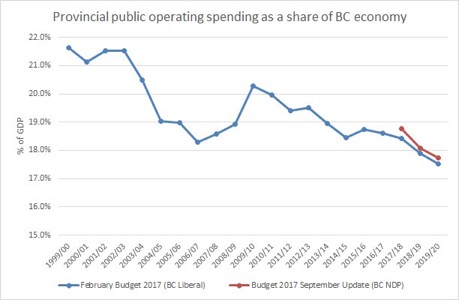 Note: the above data represent total operating expenditures divided by nominal GDP, taken from various sources. Figures include debt-serving costs in the numerator. It should be noted that capital spending was relatively steady during period in question. Figures compiled by Alex Hemingway (CCPA-BC).

2. While the BC Liberals were in office from 2001 until 2017, new supply of subsidized housing for low-income households failed to keep up with increased demand. And as discussed in this report, when successive Liberal governments did provide new funding for affordable housing, they directed it at rental assistance (i.e., financial assistance) for low-income tenants renting from for-profit landlords, emergency shelter beds and SRO hotels. While spending on all of those initiatives are important, so is spending on new units of permanent, non-profit housing for low-income households. (I’ve previously written about this topic here.)

3. Across the province, average rent levels have increased very substantially over the past 25 years. Average rent for a one-bedroom apartment in BC increased by 24 per cent between 1990 and 2016; and for a bachelor unit, average rent increased by 29 per cent (both of these calculations account for inflation). The figures can be accessed here.

4. Beginning in 1996, it became very challenging to qualify for social assistance in BC. I’m referring to successive reforms to BC’s social assistance system brought in 1996, 2002 and 2003. These measures include: lower benefit levels for recipients (to be elaborated on in point #5 below); a reduction in asset exemption limits; stricter eligibility requirements; proof of job search requirements; the requirement of recipients to literally line up to receive their cheques (as opposed to receiving them in the mail or having them directly deposited into the bank); and more fraud detection. (For more on these changes, see this report and this report.)[1] 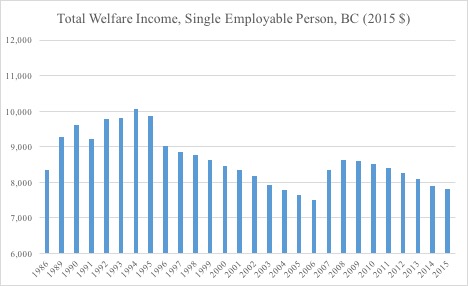 7. BC appears to be experiencing rising homelessness. Time series data showing fluctuations in homeless shelter demand over the past several decades for BC as a whole isn’t publicly available. However, we do know from a recent ‘point in time’ count that, between 2014 and 2017, the number of people considered homeless in Metro Vancouver jumped by 30%.

9. BC’s new NDP government has undertaken important initiatives that may reduce homelessness. These measures include a $100/month increase in social assistance benefit levels, along with increases to earnings exemptions for recipients. What’s more, last year’s provincial budget included $291 million over two years to build 2,000 modular housing units for persons experiencing homelessness throughout the province, along with $172 million to operate those units (with 24/7 staffing support). Last year’s budget also included $208 million for the construction of 1,700 new rental units to be operated by non-profit organizations. BC’s provincial government also has a plan to finance these (and other) important initiatives. Indeed, it introduced a new tax bracket created for individuals who earn more than $150,000/yr.; it has also increased the corporate tax rate.

10. The housing measures announced in last year’s provincial budget were likely introduced in part as a result of advocacy. For example, the BC Non-Profit Housing Association has been stellar in its advocacy. And over at the BC office of the Canadian Centre for Policy Alternatives, Marc Lee has done a considerable amount of analysis—including here and here. (For a general overview of advocacy in Canada’s affordable housing and homelessness sectors, see this previous blog post.)[3]

In Sum. Homelessness across BC appears to have increased in recent years, driven by both insufficient investment in non-profit housing and inadequate income assistance measures. However, recent measures introduced by the new provincial government (along with measures at the federal level) may have the effect of reducing homelessness. Further initiatives to watch out for over the next several years in BC include the development of a provincial poverty reduction strategy, a provincial housing strategy and a provincial homelessness strategy (along with a province-wide ‘homeless count’ this spring).[4]

The present blog post was inspired by an October 2017 presentation I gave to a forum on affordable housing and homelessness in Nelson, BC. My PowerPoint slides can be downloaded here.

[1] In 2012, some ‘good news’ reforms were made to BC’s social assistance system. They’re discussed here.

[2] These figures include all forms of federal and provincial tax benefits; the figures are also expressed in constant, 2016 dollars.

[3] Other factors likely played a role as well. For example, a BC-based colleague of mine tells me via email: “BC’s new NDP government has a constituency, values and ideology that has moved poverty-reduction to the top of the policy priorities list.”

[4] Other upcoming provincial strategies to note include a mental health and addictions strategy, as well as a child care and development strategy.