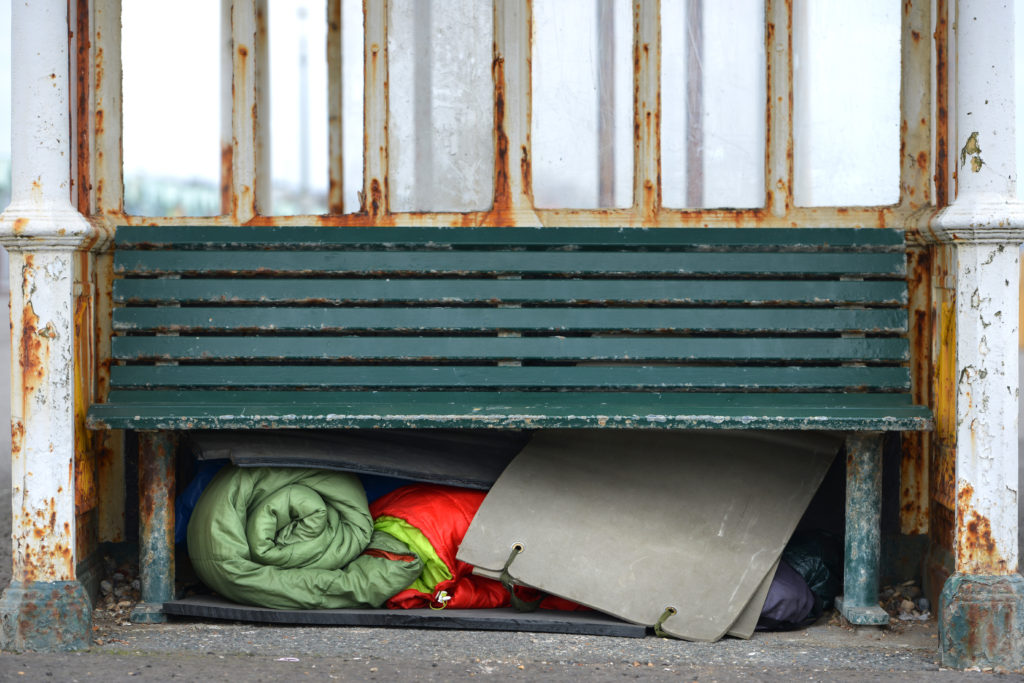 Carey Doberstein, a professor at the University of British Columbia’s Okanagan campus, has written a book about homelessness governance in Canada. The book’s focus is on the way homelessness funding is targeted and allocated in three cities: Vancouver, Calgary and Toronto. It focuses on the 1995-2015 period.

1. There are some major differences in homelessness across Vancouver, Calgary and Toronto. On a per-capita basis, Calgary has the most homelessness of the three cities, and Metro Vancouver the least. Between 2008 and 2014, Calgary saw a 62% drop in street homelessness, while Metro Vancouver saw a 39% decrease and Toronto a 24% increase. Both Calgary and Toronto saw modest increases in Indigenous representation among their homeless populations during the period under consideration (17% and 6% respectively) while Vancouver saw a 15% decrease during this time. Finally, families constituted just 5% of persons living in Vancouver’s shelter system in 2014; in Calgary the figure is 12%, and Toronto 20%. All of these figures are accurate as of 2014 and do not reflect results of more recent enumerations (keeping in mind that cross-city comparisons of homelessness populations do come with challenges).

2. One such difference pertains to policy and governance. According to Doberstein: “These three cities differ dramatically in how government and civil society actors organize themselves in governance arrangements to solve public problems” (p. 6). These differences ultimately have an important impact on what homelessness looks like on the ground; however, they do not fully account for the many differences discussed in point #1 above (for more on the many factors that impact the size of a city’s homeless population, see point #3 of this blog post).

4. Multiple stakeholders play important roles in such decision-making in both Vancouver and Calgary, more so than in Toronto. Vancouver and Calgary both have community advisory bodies that meet regularly and where members engage in important debate that leads to decisions pertaining to the disbursement of homelessness funding from the federal and provincial governments. By contrast, Toronto has a community advisory body that advises Toronto’s municipal government on how to direct federal homelessness funding; however, it meets just once or twice a year, and “essentially functions as a rubber stamp for the [municipal] bureaucracy’s homelessness agenda” (p. 95). The book goes on to state: “Toronto advanced many important policy debates and changes in the late 1990s and early 2000s, but the city has since lost its position on the cutting edge…” (p. 88).

5. Toronto may be turning a corner. The book notes that, in 2014, Toronto City Council tasked the newly-formed Toronto Alliance to End Homelessness “to serve as the designated advisory group to the City of Toronto on all aspects of its policy response to homelessness and housing…with the aim of engaging with community stakeholders in a more sustained and substantive fashion” (p. 123). This may give some Toronto-based readers reason for optimism.

6. Government plays a crucial role as a funder of homelessness programming, but government officials have a limited line of sight. Former BC Housing manager Michael Anhorn is quoted in the book stating: “It’s way too easy as a government bureaucrat to sit in our office and look at stats and think you know what’s happening [on the streets] is because of this or that. And, in part, that is because your statistics will only tell you what you measure, whereas service providers are in the day-to-day, and they will recognize trends that are happening before the statistics can identify them” (pp. 83-84).

7. Government officials can be risk averse. Public servants ultimately need to have their proposals vetted by elected officials, who in turn are nervous about risk. By contrast, staff at smaller non-profit agencies tend to be governed by board members who are often more nimble and less risk averse.

8. The book argues that Vancouver and Toronto’s municipal governments have been more directly involved in housing and homelessness than Calgary’s. For example, according to the book: “The City of Calgary has the same key homelessness-policy levers as other cities do—namely, the control over land use and development—yet it has not fully leveraged that control through inclusionary zoning policies such as we see in Vancouver, and to a lesser extent, in Toronto.” (p. 129).

10. The book contains a few factual errors, though none of them undermine the book’s main arguments. In Chapter 3, the book notes (incorrectly) that in 1993 it was the Chrétien government that put an end to federal funding for new social housing units in Canada (with the exception of on-reserve housing). It was actually the Progressive Conservative government that ended this housing (in its April budget that year). Chapter 3 also notes that Vancouver’s community advisory body has shown innovation in “being the first to fund low-barrier homeless shelters (no requirement to be clean and sober)…” (p. 65). In fact, the first homeless shelter I worked at in Toronto in 1998 (Dixon Hall Men’s Shelter) had no such requirement.

In Sum: I believe this book is important for people interested in homelessness policy and governance in Canada. Officials in both government and the non-profit sector should read this. So should volunteers and consultants. I also recommend that professors read it and assign it to their students (especially graduate students).