Ten Points on Recession, Deficits, and Austerity in Ontario

Ontario public service advocates and providers are becoming increasingly and rightfully alarmed about the direction of provincial finances, in the run-up to tomorrow's public release of the Drummond Commission report, and a subsequent provincial budget that looks to be painfully austere.

The budget-cutting set are ramping up the rhetoric pretty dramatically: warning that Ontario is fast becoming the "Greece of Canada," that we are about to hit the "debt wall," that interest rates will skyrocket when the debt raters wake up, and similar nonsense.  This is pure shock-doctrine stuff (reminiscent of like propoganda that set the stage for Paul Martin's austerity in the mid-1990s), and must be called out for what it is.

Ontario is not remotely Greece.  A good way to make us MORE like Greece would be to throw tens of thousands of broader public sector workers out of their jobs, in a misguided effort to dig our way out of a hole.  Investors love our bonds (and those of every other Canadian province) -- that's why they finance 10-year loans for interest rates barely above the rate of inflation.  The key task in strengthening the fiscal balance is to put people back to work: paying taxes (instead of collecting EI), and buying stuff (instead of hoarding cash).  While the provincial government's toolkit in that regard is not infinite (the feds have far more ability to influence job-creation, through macro, monetary, exchange rate, and other policies), we can't consider the provincial fiscal challenge without placing it in its appropriate macroeconomic context.

Here are ten macroeconomic factoids to keep in mind as we prepare to counter the overarching claim that Ontario just can't afford our already-stretched network of public services:

a) the average effective interest rate paid in Ontario is declining (not rising), because each bond from the 1990s or 2000s that matures is replaced with a lower-interest-rate bond today (despite the overblown fear of rating agencies, downgrades, etc). 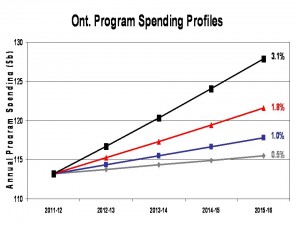