Ten considerations for the next Alberta budget

On November 16, I participated in a workshop organized by the Alberta Alternative Budget Working Group. Held at the University of Alberta’s main campus, speakers discussed macroeconomic, health care and social policy considerations for the next Alberta budget.

1) Alberta’s still recovering from a nasty recession, triggered by a drop in world oil prices. Edmonton-based economist Garry Sran noted that the recent recession was Alberta’s worst in over 30 years. Alberta’s real GDP contracted by 3.7% in 2015 and by another 4.2% in 2016. The good news is that Alberta’s economy grew by 4.4% (in real terms) in 2017 and is estimated to grow by 2.7% (in real terms) in 2018.¹

2) Alberta still has the lowest debt-to-GDP ratio of any province—though that’s growing quickly. This was one of the points made by Edmonton-based researcher Alejandro Pachon. This phenomenon is illustrated in the visual below. 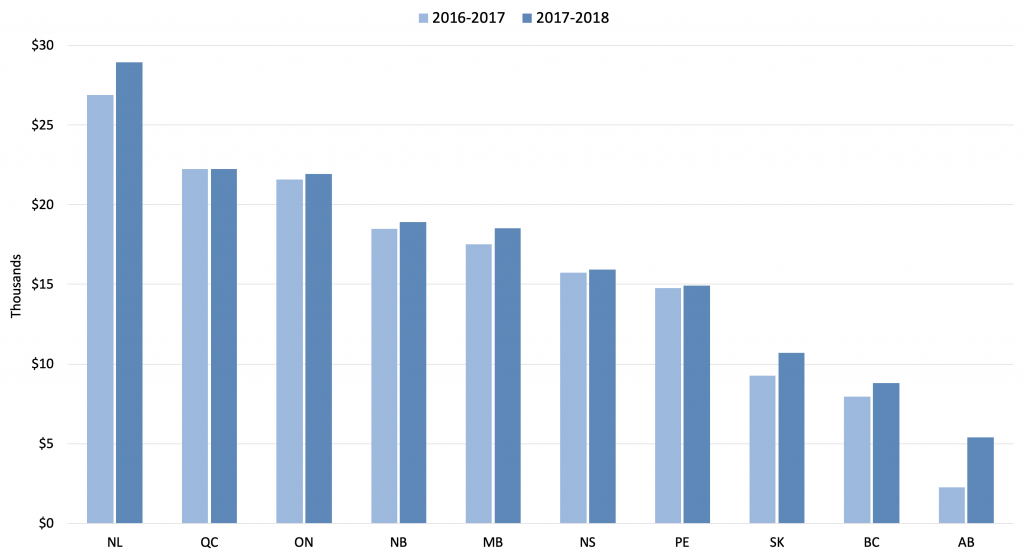 Chart 2 | Total Provincial Expenses as a Percentage of GDP 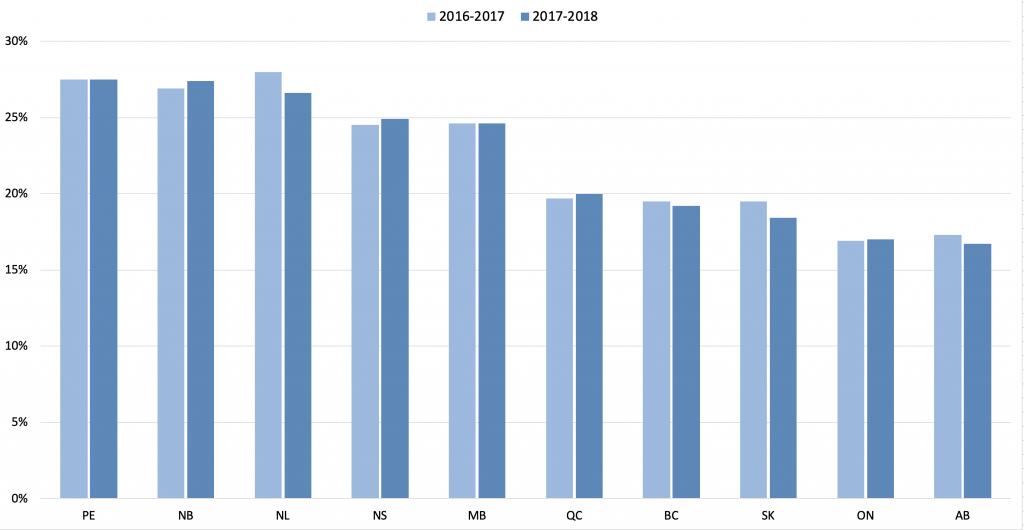 4) Alberta still has a revenue problem. Just as a province should spend according to its means, it should also derive revenue accordingly (including through taxes). Tax rates are still low in Alberta, contributing to a revenue problem illustrated below.

Chart 3 | Total Provincial Revenue as a Percentage of GDP 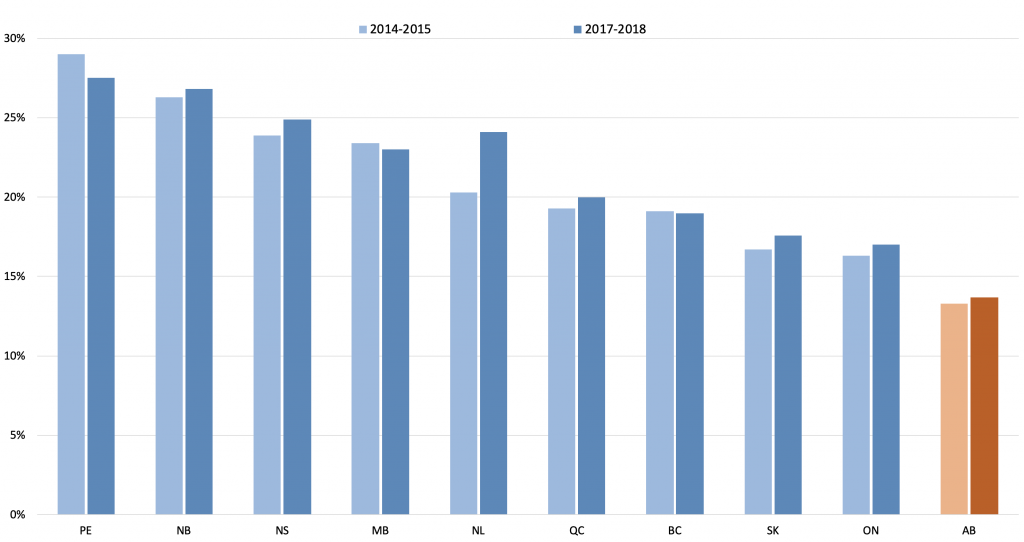 5) There are important health care initiatives that could benefit Albertans. Trevor Zimmerman, discussing health care, noted that federal action on pharmacare is “slow moving.” He therefore expressed support for the idea of the Alberta government introducing universal pharmacare, which he estimates would cost the provincial treasury approximately $400M annually.

6) The Notley government has done important work on the Indigenous file. In her presentation, Angele Alook acknowledged that Alberta’s provincial government has undertaken important initiatives with Indigenous peoples. Last year it made a $100 million commitment towards safe drinking water. Earlier this year, it implemented training for public servants to better understand Indigenous cultural identities and the history of colonialism. More recently, Alberta became the only Canadian province to fully implement Jordan’s Principle. However, she also noted that some Indigenous peoples in the province feel they are a “bureaucratic check mark” on a list of things to do when industry is proposing new development, and that all Albertans must remain vigilant in holding government and industry to account over their duty to consult.

7) Alberta remains the only Canadian province without pay equity legislation. As noted by Kathleen Lahey in a 2016 report: “The purpose of pay equity laws is to equalize women’s wages to levels equivalent to men’s all across the wage scale…” (p. 1). Yet, the Notley government does not appear to be currently considering the introduction of such legislation. In her workshop presentation, Hitomi Suzuta noted that many view pay equity as a ‘women’s issue,’ when in fact, it’s not just women who benefit from such legislation.

8) Schools in Alberta’s K-12 education system face more than $2 billion in deferred maintenance. This can mean some schools may lack wheelchair accessibility, while children at others avoid unsanitary washrooms in disrepair. Almost two-thirds of buildings in Edmonton Public School system are now at least 50 years old. A 2016 news story on the Edmonton context can be found here, while a recent news story on this situation as it relates to Calgary can be found here.

9) There’s considerable need for more affordable housing in Alberta. Admittedly, the Notley government has roughly doubled annual provincial spending on housing; and homeless-serving systems of care have developed sophisticated databases, triage techniques and performance indicators. However, as a percentage of their total household expenditures, low-income Albertans spend considerably more on housing today than pre-recession—we know this thanks to some great analysis recently done by Margarita Wilkins and Ron Kneebone (see visual below). 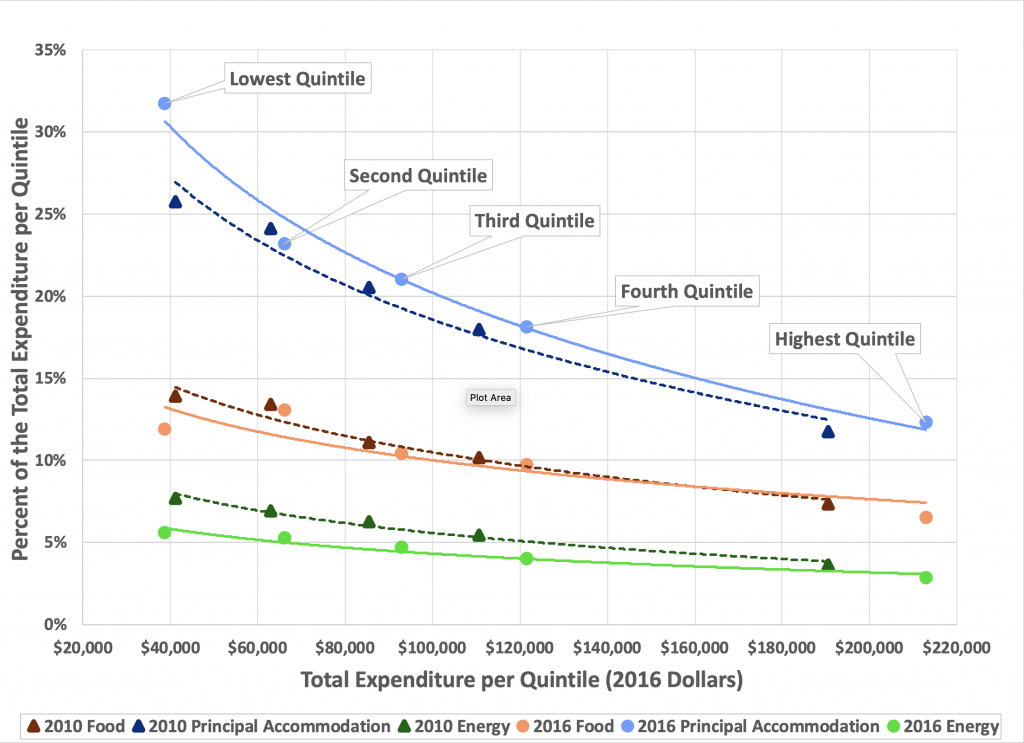 10) Alberta’s population is aging. Due mostly to Baby Boomers getting older, this same aging phenomenon is happening throughout the OECD; it’s projected to continue for approximately the next three decades. With this so-called Silver Tsunami comes increased demand for health care services, including long-term care. Trevor Zimmerman noted that, between 2001 and 2017, Alberta’s population aged 85 and above increased by 96%. During this same period, the total number of beds in long-term care facilities in the province increased by less than 14%.

In sum. The November workshop, now an annual event, provides a ‘sneak peak’ at the kinds of analysis and proposals we can expect to see in the next Alberta Alternative Budget (which we expect to release shortly before the next provincial budget is tabled). More information on last year’s project can be found here.