The Temporary Foreign Workers (TFW) program has become such a mess that its complete elimination for low-skilled occupations is now an active possibility. Business, for its part, is screaming bloody murder that the cancellation will force the shutdown of entire sectors. They claim even offering $100/hour or $180,000/year to serve coffee at Tim Hortons will be inadequate to attract applicants. To boot, there is clear evidence that hiring TFWs instead of, say, Canadian youth is bad for Canadians looking for work.

As a progressive, I’ve wrestled with what to do with this mess. Should the whole program just be cancelled? If so, what happens to the actual Temporary Foreign Workers and, as a progressive, should I even care?

The first thing that needs to be recognized about the TFW program is that it is not being used to bring skilled labour to Canada. Instead, it is bringing in workers at low or intermediate skill levels. The top 10 occupations for TFWs are all low skilled with the exception of “cooks”, “truck drivers” and perhaps “other performers.” 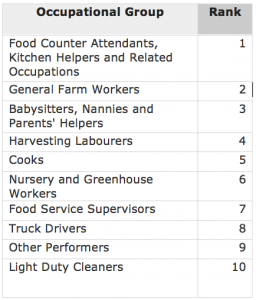 The program has become so large that in several provinces, TFWs have captured large portions of all new jobs created. In the Atlantic provinces of Nova Scotia and PEI, roughly 1 out of every 5 jobs created since 2005 has gone to a temporary foreign worker. The situation is even worse in Alberta, where 1 out of every 4 new jobs created in that province since 2005 have gone to a TFW. Across the country, it’s closer to 1 in 10 new jobs since 2005. However, even this lower national average is staggering when unemployment is stuck around 7%, with youth unemployment double that. 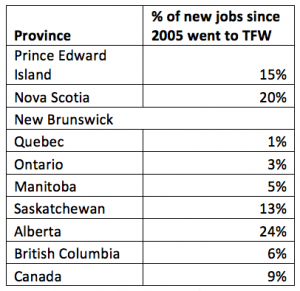 Why has the TFW program been so thoroughly taken over by low skilled workers? In most cases, it is low-skilled Canadians that are the most likely to be out of work to begin with. However, low skilled jobs in Canada (although not everywhere) are almost by definition low paid and temporary. This is the TFW "advantage":

The threat of being deported is a much more potent threat than simply being fired, which is generally the threat for low skilled workers. So it's no surprise that employers prefer TFWs… they complain less about basic working rights…under threat of deportation.

The TFW program has the worst imbalance of power in any labour relationship in Canada, whereby no matter who is at fault it is always the worker who suffers.

As a progressive, this mockery of worker rights in Canada is disturbing, particularly since it's taking advantage of desperate workers from abroad who have no rights. And it is low skilled Canadians who experience higher unemployment as a result.

Because of highly publicized abuse of the program in the Atlantic provinces and Alberta, public opinion has clearly turned against the program.

So as a progressive, what’s to be done? Cancel the program and deport every single temporary foreign worker?

I believe there is a middle ground. Let’s cancel the TFW program, but before we do that, let’s offer all temporary foreign workers an expedited process towards permanent residency, if they want it. In the meantime, TFWs should be given a choice to stay at their present employer or find a new one if they wish.

(Live-in caregivers, one of the TFW categories, already have the right to apply for permanent residency. Although, there is discussion that this right should be removed as it might back up the immigration system).

Interestingly, it is a union that spearheaded this approach on a small scale. The Canadian government should expand it on a large scale. If you were an employer who treated their foreign workers fairly, then good for you as those folks will likely stick with you.

However, if you’re an employer who used the threat of deportation to deny foreign workers basic rights and fair pay, then welcome to the Canadian labour market where if you treat people badly … they quit because they can…without deportation.

David Macdonald is a Senior Economist with the Canadian Centre for Policy Alternatives.