There is a nice little story tucked in to the pages of Canada’s Economic Action Plan 2013. It’s a sweet tale of Thomas and Colleen and their two children. (I like to imagine those little stick-figure stickers on the back of their mini-van waving hello to their friends in happy economic-action-plan-land). This story is called “Canadian families keep more of their hard-earned dollars as a result of the government’s actions to reduce the tax burden.” 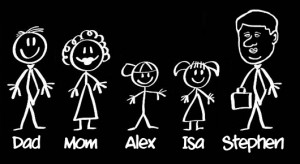 Also, if this were Canada, Colleen might have a part-time job, or she might be working on contract. That’s because in Canada (as opposed to action-plan-land) women are far more likely than men to perform part-time, temporary or contract work. Of course, if she is working as part of the federal public contractors program, then she can expect to earn at least 28% less than Thomas. Actually, she earns between 20%-30% less than Thomas no matter what. Because in Canada, we still have a gap between what women and men earn for work of the same value.

First, Thomas and Colleen get their child tax credit just for having children. Actually, only Colleen gets that one. (Sorry, Thomas.)

Second, Thomas and Colleen will have to spend $2000 on fitness and art classes for their children, if they want to claim the maximum amount on their taxes. Actually, because of Colleen’s lower income bracket, Thomas has to claim the full amount in order to get the $300 tax credit. (Sorry, Colleen.) Get the kids in the van, it’s time for hockey and watercolors!

So far, Thomas and Colleen have spent $52,000 in order to realize a $1000 reduction in GST and $300 tax credit on their federal income tax. In action-plan-land, this is called ‘saving.’ In Canada, this is called ‘spending.’

In Canada, Thomas and Colleen are already spending between $28,000-$33,000 on basic necessities. Colleen and Thomas are also spending approximately $18,000 a year for childcare for their two children. That’s if they can find a spot. (Good luck Colleen and Thomas!) Because Canada has one of the lowest childcare access rates in the industrialized world. Less than 20% of the existing childcare spaces available are regulated spaces. But don’t worry, I’m sure Isabelle and Alexander will be just fine.

Now let’s see what’s left for Thomas and Colleen to spend on important family priorities. Thomas has $15,181 and Colleen has $4415. Of course, Thomas and Colleen still need to pay for prescription drugs and dental care. Don’t forget saving for Isabelle and Alexander’s education. I’m sure you’ll have a little left to put in your RRSPs. Well, maybe just Thomas. Good luck retiring Colleen!

In action-plan-land these are called “choices.” In Canada, when families have to choose between safe housing and healthy food, between working to pay the rent or knowing their child is cared for, this is called a “disaster.”

Tax measures based on income provide the most relief where it is needed least—at the top of the income bracket. This is offering aspirin to someone who doesn’t have a headache. Tax relief delivered through a lowered sales tax benefits most those who spend most. Which is great, if you want to encourage folks to buy $17 glasses of orange juice.

Real relief means a government that provides the basic services and necessities that families need—affordable housing, childcare, pharmacare and dental care. Real relief means providing those services to the families that actually need them—the 73% of families of four who make less than $115,000 a year.

Real relief. For real families. That we can really afford.

1.     “CANSIM table: 202-0102: Average Earnings by Sex and Work Pattern.” Ottawa: Statistics Canada. 2.     The Canada Revenue Agency “Family Tax Relief Backgrounder” also over-estimates the “average” income of a family of four at $100,000. Statistics Canada places the average market income of “Economic families, two persons or more” at $80,300. Sources: “Family Tax Relief Backgrounder.” February 18, 2013. Canada Revenue Agency; “CANSIM Table 202-02021: Average market income, by economic family type, 2010 constant dollars.” Ottawa: Statistics Canada. 3.     “CANSIM table: 282-0002: Full-Time and Part-Time Employment by Sex and Age Group.” Ottawa: Statistics Canada. 4.     Cohen, Marjorie Griffin (2012). “Budget Bill and the Federal Contractors Program,” Progressive Economics Forum. 5.     “Gender Wage Gap: Full Time Employees.” OECD. 6.     “Primarily responsible for the care and upbringing of a child means that you are responsible for such things as supervising the child’s daily activities and needs, making sure the child’s medical needs are met, and arranging for child care when necessary. If there is a female parent who lives with the child, we usually consider her to be this person. However, if the male parent is primarily responsible, he must attach to Form RC66, Canada Child Benefits Application, a signed note from the female parent that states he is primarily responsible for all of the children in the household.” Source: “CCTB: Application and Eligibility.” Ottawa: Canada Revenue Agency. 7.    Canada Revenue Agency estimate of the savings for a family of four with a total incomes in the range of $100,000. Source: “Family Tax Relief Backgrounder.” Ottawa: Canada Revenue Agency. February 18th, 2013. 8.     Estimated cost, for a family of four, of a ‘market basket’ that includes: “a nutritious diet, clothing and footwear, shelter, transportation, and other necessary goods and services (such as personal care items or household supplies).” “Market Basket Measure Thresholds (2008 base) for reference family, by Market Basket Measure region and component, 2010 constant dollars.” CANSIM Table 202-0809. Ottawa: Statistics Canada. 9.     “Early Childhood Education and Care.” Doing Better Together: Alternative Federal Budget 2013. Ottawa: Canadian Centre for Policy Alternatives. Shaker, Erika ed. (2009). Beyond Child's Play: Caring For and Educating Young Children in Canada. Canadian Centre for Policy Alternatives. 10.    Rowan-Legg, Anne (2013). “Oral Health Care for Children.” Paediatric Child Health vol. 18.1. 11.    “Where do I fit?” Ottawa: Canadian Center for Policy Alternatives. 12.     “Macroeconomic Policy.” Doing Better Together: The Alternative Federal Budget 2013. Ottawa: Canadian Centre for Policy Alternatives. 13.     Colleen’s income goes up, because the $1200 Universal Child Care Benefit is added back in to her income. 14.    Based on residence in the Province of Ontario.