Taking credit where it's not due

On the election’s climate file, Prime Minister Harper has claimed that his is the “first government in Canadian history that has actually been able to see a reduction in our greenhouse gas emissions while at the same time seeing the economy grow.” This is very much a case of claiming credit where it is not due. 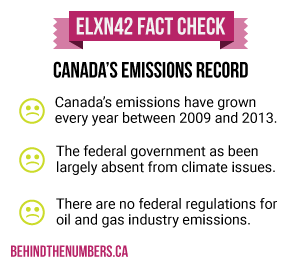 Measuring greenhouse gases depends on which dates you choose. If we look at Canada’s GHG emissions going back to 2005, the last full year before Harper became Prime Minister, Canada’s emissions fell by 23 million tonnes of CO2, or 3%, as of 2013, the last year for which we have data. But if we consider the impact of the 2008-10 Great Recession, we see that GHG emissions fell alongside the economy, bottoming out in 2009. Since then Canada’s emissions have grown every year between 2009 and 2013.

Many provinces have taken on climate action initiatives in the absence of federal leadership. The Government of Ontario, in particular, has done much heavy lifting by phasing out coal-fired power. This alone reduced Canada’s emissions by 23.6 million tonnes between 2005 and 2013 – equivalent to the national drop. Total emissions in Ontario actually fell by more – 40 million tonnes – over the same time frame, due to additional hit to manufacturing industries from the recession.

Federal leadership has been in the opposite direction of climate action. The federal government has pushed for the expansion of fossil fuel industries, including the creation of pipelines, gutting environmental protection, removing opportunities for public comment, even spying on environmental groups. Although unsuccessful in getting new pipeline capacity online, GHG emissions from fossil fuel production in the Conservative heartland are way up: Alberta’s emissions grew by 33 million tonnes since 2005, a 14% increase; Saskatchewan emissions grew by 5 million tonnes, up 8%. See data tables for Canada and provinces.

The PM’s claim of a sector-by-sector regulatory approach is also fiction. No sectoral regulations have emerged for oil and gas, the source of 1/4 of the country’s industrial and commercial emissions, despite being promised repeatedly. In transportation, Canada is merely following the US lead on fuel efficiency standards for vehicles. The only other area of note is coal-fired power regulations where, in contrast to provincial actions like Ontario’s, regulations apply to new plants but exempt existing plants until they are 50 years old. A broader recap of climate and energy policy in the Harper Decade is available.

The PM’s preference for small government and balanced budgets has, if anything, been a drag on economic growth. When the financial crisis hit, the federal government rigidly clung to a notion of a balanced budget, which would have made the crisis worse. It was only when faced with losing power to an NDP-Liberal coalition that a stimulus package was implemented in the 2009 budget. That stimulus package was under-funded, then transformed into a multi-year advertising campaign for the Conservatives, paid for by taxpayers, with Economic Action Plan signs on the ground and ads on TV.

Canada’s economy has stalled in 2015 after a period of “slowth” (my colleague Armine Yalnizyan’s term for weak growth). The latest obsession with presenting a balanced budget for the electorate has led to many cuts in recent years, again a drag on growth. The federal government has left most of the action to the Bank of Canada and low-interest-rate monetary policy, while abdicating counter-cyclical fiscal policy.

Ironically, because GHG emissions are linked to GDP growth, the Conservative government’s failure to get GDP rolling is probably the best shot at claiming some credit for Canada’s GHG performance.