As I established in my previous blog post, Deficit Games, Ontario’s current fiscal deficit is a non-issue.

The deficit has declined to the point where it will dwindle away as the economy gradually resumes its long-term economic growth trend line.

The enduring and highly visible deficit in Ontario is actually its public services deficit.

In the 2013 provincial budget, the Ontario government acknowledged it was on track to implement 60% of the spending cuts recommended in the 2012 Drummond report. In that same budget, the government touted that Ontario provincial spending was lowest rate per capita in Canada in 2012-13.

The province’s early learning program is only half done and continues to ignore the potential benefit from a universal affordable, high quality child care program.

All of Ontario’s major cities are documenting massive waiting lists for affordable housing in the absence of any provincial housing program.

The government may have abandoned the goal reducing child poverty in five years, but the underlying problem has not gone away – nor has adult poverty.

Worsening income inequality is growing in importance as an issue around the world – virtually everywhere it seems, except for our federal government and at the provincial level in Ontario, where action to resolve the problem is in short supply.

There is constant political narrative about the importance of education as a way to equalize opportunity and to create the economy of the future, yet the province’s approach to funding elementary and secondary education short-changes those students who most need special support in order to succeed.

At the post-secondary level, high and growing tuition and other post-secondary education costs – particularly for professional programs -- stand as a barrier to the aspirations of hundreds of thousands of students in low- and moderate-income families.

We are, and should be, proud of our public health care system, but legitimate cost drivers like the aging of the population continue to be ignored and the government is operating on the implicit premise that it can starve the system into a reform of health care delivery. The opposite is true.

The trajectory for public service investment implicit in the government’s current long-term fiscal strategy is unresponsive to the province’s public services needs. And those needs cannot be met without a concerted effort to rebuild Ontario’s fiscal capacity.

The fact is that Ontarians continue to suffer from the lingering effects of the Mike Harris government’s public service and tax cuts during the late-1990s and early-2000s.

A continuing succession of tax cuts brought about a significant reduction in Ontario’s fiscal capacity – a reduction from which there has been no serious attempt to recover.

And while the tax cuts were touted for their value to middle-income Ontarians, they have, in fact, paid in four ways for those cuts: (1) tax cuts that went disproportionately to the corporate sector and to Ontarians at the top of the income scale, (2) reduced public services, (3) higher user fees, (4) a fiscal drag on the economy as a result of austerity measures imposed in 2012-13.

The following chart details the cumulative impact of the Harris era on public services and on Ontario’s capacity to pay for them. 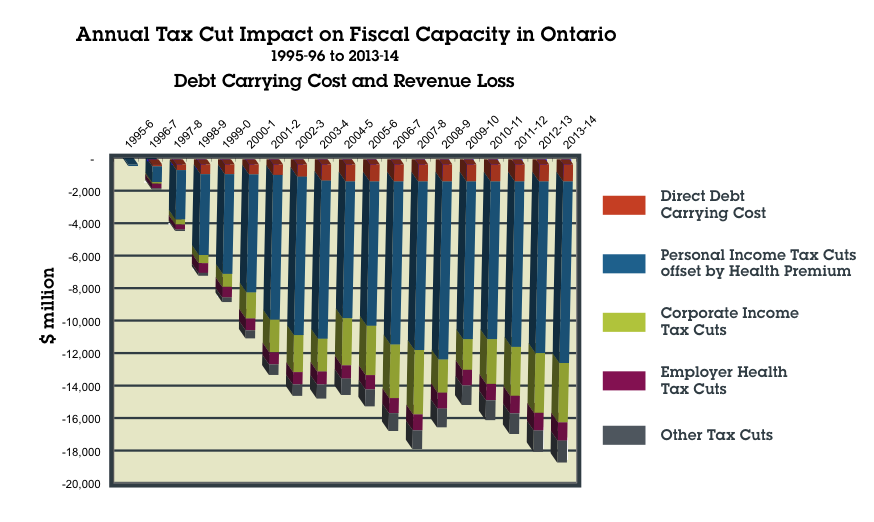 The cumulative impact of the Harris era revenue cuts – even after allowing for the McGuinty government’s Health Premium – represents a loss of fiscal capacity of nearly $19 billion a year.

Looking forward, it is essential that Ontario consider all of the options available to rebuild the province’s capacity to pay for public services.

The personal income tax – Ontario’s only truly progressive revenue source – could be made more progressive and generate more revenue by creating new higher marginal tax brackets at the top of the income scale.

Increasing the marginal tax on the richest 1% by simply one percentage point could yield up to $250 million in additional revenue.

Doing the same for the richest 10% could expand potential additional revenue by $640 million.

Doing so would also have a redistributive effect on Ontario’s growing income inequality problem.

Ontario could also lead a national debate on tax loopholes that cost the province and the federal government billions.

Under Mike Harris, Ontario led a massive cut in capital gains taxation – the single most regressive tax change in Canadian history. The annual cost of this tax cut to provincial revenue as of 2012 was approximately $1.3 billion.

Ontario could lead a drive to revive the idea that when it comes to income taxation, “a buck is a buck is a buck”, even if it was earned through capital gains.

By returning the corporate income tax rate simply to 2009 levels, Ontario could generate up to $2.5 billion in additional revenue.

Ontario’s public health care system is a substantial benefit to Ontario business, relative to competitors in the United States. The share of the cost of the system (OHIP plus hospitals) paid by employers through the Employer Health Tax has dropped from 17.2% in its first full year of operation in 1991 to 12.4% today. Unjustifiable exemptions from the levy further reduce potential revenue.

Furthermore, many businesses do not participate directly in this funding mechanism because they are exempt from the tax. These exemptions alone result in a $2.7 billion revenue loss every year.

When the federal government effectively declared that it did not need the revenue from the 7% GST and reduced it to 5%, Ontario had the option of putting that revenue to work for Ontarians through better and more securely funded public services. Given the scope of unmet needs for public services in Ontario and the shrinking size of our public economy, it is difficult to justify a sales tax rate that is two percentage points lower than it was a decade ago.

Raising the HST by a single percentage point would generate an additional $2.7 billion in revenue.

Ontario’s environmental and health-related levies have not changed in more than a decade. Gasoline and fuel taxes are attractive options because they generate more revenue and because the behavioural responses they encourage are positive.

Raising gas and fuel taxes simply by the 7 cents needed to account for inflation since the last time they were increased in 1992 would yield $1.5 billion.

Finally, Ontario needs to think more broadly about the idea of tying new revenue sources to the funding of new public services. That idea has been explored in some detail for transit funding in the Greater Toronto and Hamilton Area. But it also has potential for important additions to public services like adding pharmaceutical coverage to OHIP.

Some combination of these tax options could not only be pressed into service to address income inequality and to reduce the fiscal deficit, it is the only way Ontario is ever going to tackle its worsening public services deficit.