Student job market is tighter than a pair of skinny jeans

For most university students across Canada, this week marks the end of summer and the first full week of fall classes. As CCPA noted on Wednesday, most students celebrated ‘back-to-school’ with tuition increases and higher student debt. However, new data from Statistics Canada suggests that students are not only struggling with tuition costs, but they are also struggling to find summer employment – traditionally, a way for students to help pay for University.

The result is that students are being squeezed on both sides, trying to cope with higher tuition fees and growing debt on one side while having a harder time finding jobs to pay for it.

On Friday Statistics Canada released the latest Labour Force Survey  including statistics on summer employment by students who were planning to return to school in the fall. 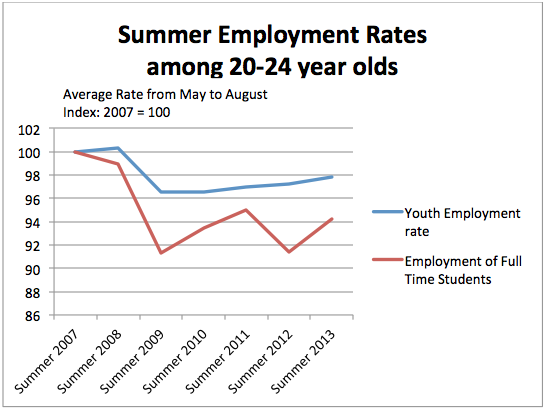 From the summer of 2007 to the summer of 2009, the proportion of students employed fell by almost a tenth and has only moderately recovered. While the non-student youth employment rate is almost 98% of the pre-recession level, the student rate has had an inconsistent recovery and is only at 94% of 2007 levels

And the low student employment rather is not for lack of trying. 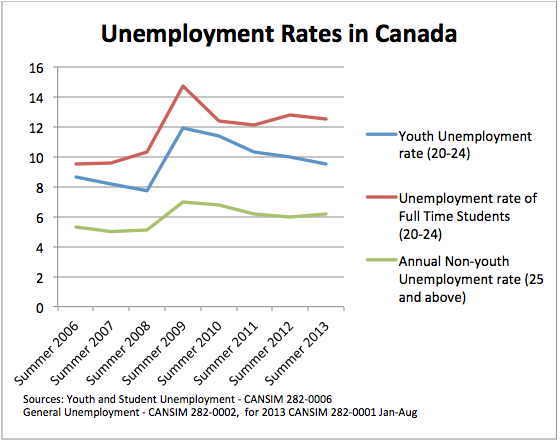 In real human terms, that means there were about 96,050 students who wanted to work this summer but couldn’t find a job. Remember that figure the next time a pundit says that students should just “work harder” to cover rising tuition costs.