Stealth Ski-Doos and the Price of Milk: What does the Arctic want? 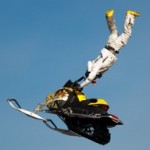 Well, Prime Minister Harper is up north again and he’s got a wicked stealth snowmobile and a big bag of priorities for Canada’s Arctic. Top of the list: Arctic sovereignty and economic development. On his first stop of the tour this year Harper lauded the “hardy, industrious people from all over the world, who, digging for gold, ended up digging the foundations for an increasingly powerful northern economy.” To that gold-digging end, the Prime Minister’s visit to the Arctic has included the announcement of all kinds of new goodies for the north – training (to work in extractive industries), jobs (in extractive industries), roads to resources (in extractive industries).

But what is the Arctic getting out of all this? And is it really what the folks in the Arctic want? Consider, for example, some of the priorities articulated by Inuit women at the landmark Inuit Women’s Leadership Conference. Inuit women certainly want jobs, training and roads. But here are few other things they’ve identified as important – things that might even help them take advantage of all those jobs! jobs! jobs! coming to their communities:

Why housing? According to a recent housing need assessment by the Government of Nunavut, 49% of all residents lived in dwellings that were “either crowded or in need of major repairs or a combination of both.” That means that nearly 17,000 people are living in inadequate housing in Nunavut alone. The federal government has committed funding to build new housing in Nunavut. Enough funding to build 250 new houses over the next two years. That works out to 68 people in need of housing per new house built. I guess that present is for sharing.

Now let’s talk food security. When the United Nations sent its expert on the right to food to Canada last year, his visit was described by the federal government as “completely ridiculous” and “insulting.” More than half of the population in Nunavut have inadequate or inconsistent access to food and of those experiencing food insecurity, a disproportionate share are women (62%) and families with young children (70%). The lack of access to safe housing and inadequate food contribute to the high rates of child apprehension. In many cases, children are being taken from their families, not because there is abuse present, but because they are living in overcrowded or unsafe housing and do not have access to healthy food. Ridiculous doesn’t begin to cover it.

Women in northern Canada face another kind of insecurity – personal insecurity. Levels of sexual assault and spousal violence in northern Canada are significantly higher than in the southern provinces. 14% of residents of Nunavut reported experiencing intimate partner violence in the past five years (compared to the national average of 6.2%). Resources for those women are wholly inadequate. Distance and the difficulty of transportation make accessing the services that do exist difficult. Women living in small remote communities are often reluctant to leave those communities and fly hundreds of miles away from their families and friends. The lack of housing means that even if they do leave, those women risk finding themselves homeless or living in unsafe conditions. If they have children they risk having those children taken away because of unsafe living conditions.

For the women that are able to surmount the obstacles of violence, inadequate housing and food insecurity, there remain additional barriers to taking those jobs! jobs! jobs!. Childcare being chief among them. The training and jobs that Canada’s Arctic Strategy is promising to deliver are predominantly in the extractive sector. Women and men are both interested in those jobs, yet only 15% of extractive companies in Canada have recruitment policies targeted at women. A recent survey of women working in the extractive sector identified several barriers to taking up that work. At the top of the list? The lack of childcare and flexible work practices--because who is going to look after the kids while you spend two weeks on the mine site?

Finally, there is the quite extraordinary request for more public meeting spaces. An extraordinary request to someone who lives in the south perhaps, where there is daylight year round and where the cost of construction is a fraction of the cost in the north. Without common spaces, there are fewer opportunities to discuss and shape common priorities. When those spaces are provided-by events such as the Arnait Nipingit, by organizations such as Pauktuutit, by researcher projects such as Fem North Net, by multimedia projects such as Tusaviit, it is clear that women in the Arctic have some priorities for Canada. Priorities like safe housing, nutritious food, personal security, and health care. Hardly extravagant.

But maybe that’s the problem. Who wants to talk about the price of milk when you can race your invisible Ski-Doo across the ice like a polar Harry Potter?