Something is rotten in the state of labour negotiations

The rich are growing richer at a faster pace than the rest of the population, which explains the widening gap between the richest and the poorest. That we know. Studies have proven the existence of income inequality time and time again. But why is the 1% getting richer at the expense of others? The latest IRIS study, conducted by associate researcher Paul-André Lapointe, provides potential answers. Basically, labour unions’ decline has weakened workers’ bargaining power, preventing them from taking full advantage of productivity gains. And if unions can no longer hold the balance of power, they can’t negotiate advantageous working conditions or ensure compensation keeps up with productivity gains.

To better understand the phenomenon, we must first go back in time. After WWII, the Western world (including Canada) went through a period of uninterrupted growth known as the postwar economic boom, or more pompously as “the Golden Age of Capitalism.” Productivity gains then were huge, and wages increased at roughly the same pace. The 1%’s share in wealth even decreased, meaning that others were managing to grow richer. The postwar economic boom is also a high point in unions’ history. Membership grew, and many struggles ended with victories. The improvements in working condition they won for their members then spread to other sectors. This is especially true for unionized workers in the public sector, long considered the labour movement’s powerhouse.

However, at the end of the 70s, something changed. The economic crisis signalled that eternal growth was but a passing illusion and that the link between productivity gains and wage increases was broken. The following years brought rocketing revenues to the 1% just as small wage-earners’ income stagnated when adjusted to the cost of living. Offshoring, the financialization of the economy, the development of non-standard employment (part-time, self-employment, etc.) and increased use of lockouts or special laws to end labour conflicts decreased the bargaining power of the 99% (as measured by the ratio between workers’ compensation and the value of output) at roughly the same pace as the increase in the richest’s revenues. Unions lost the battle for the balance of power because the precarious labour force, which was growing poorer, is much harder to organize. Their gains grew thinner, as did the ratio of workers that they were representing. 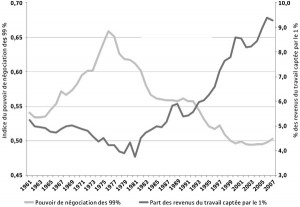 Bargaining power index for the bottom 99%

% of earned income seized by the top 1%

Unfortunately, the disparity already seems too great. The distance seems too far between what experts have been repeating and what governments are doing, but also between what unions are working towards and what the employers are willing to let go. The balance of power has shifted away from unions and that decline reverberates onto the working conditions of all workers. On the eve of public sector negotiations, it’s worth remembering that what they’ll lose, the private sector is likely to lose shortly after. And when all unionized workers will have lesser working conditions, it’s rather unlikely that Labour Standards will improve to protect an increasingly precarious labour force. The pensions’ case speaks for itself. Beyond the sustainability of municipal pension funds, it’s the very concept of collective pension savings that is being questioned. As the richest keep on getting richer and the rest of the population is experiencing stagnant working conditions, isn’t it time to look into the way in which wealth is distributed and to return the bargaining power into the hands of those who are actually responsible for these productivity gains?

This article was written by Eve-Lyne Couturier, a researcher with IRIS—a Montreal-based progressive think tank.