Small business tax cuts in Canada: been there, done that

In the prelude to the 2015 federal election, NDP Leader Thomas Mulcair is talking job creation in Southwestern Ontario.

About a year ago, Canada’s Department of Finance released a report outlining the changes in effective tax rates for small businesses, or Canadian controlled private corporations (CCPCs) as they are called in tax language, between 2000 and 2011.

The verdict: taxes paid by small businesses, at both the federal and provincial level, have decreased dramatically since 2000: a small business with $500,000 in taxable income pays less than half the combined federal and weighted average provincial[i] corporate income tax it paid just 13 years ago.

That’s right, small businesses in Canada now contribute less than half in taxes than they did at the turn of the century.

This dramatic decrease is the result of two changes. 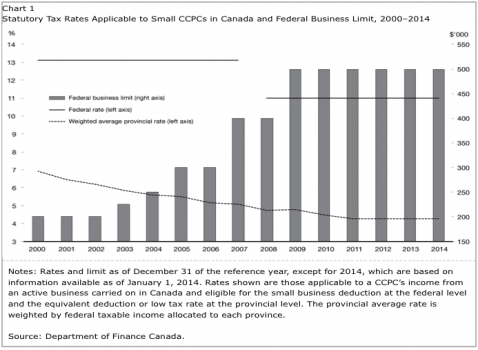 And it doesn’t stop there: the federal New Democrats want to lower the small business tax rate even further – to 10% immediately and to 9% as soon as finances permit.

It’s a promise that echoes one made during last year’s Ontario election when the provincial NDP vowed to lower the small business tax from 4% to 3% if they were elected (they weren’t). I wrote about the ill-advised nature of that political promise back during the spring 2014 provincial election.

What is the combined effect of this race to the bottom for small business and corporate taxes?

Small business tax cuts are promoted as an incentive for small businesses to reinvest their earnings and create jobs. The data suggest it’s a dubious claim.

Construction, professional, scientific and technical services, finance, insurance, real estate, and health care, and social assistance make up a significant portion of this change, representing more than 50% of all incorporated small businesses with no employees.

It appears the combination of business tax changes are inducing self-employed, high-income earners – such as doctors, lawyers, accountants, and small consultancies – to incorporate and take advantage of lower tax rates.

As Hugh Mackenzie pointed out in a recent blog post: They’re not what one typically imagines when one thinks of a small business. But these small business owners face a marginal tax rate that is much lower than the top federal-provincial marginal income tax rate that is paid by people who are wage earners. This difference makes it attractive to incorporate for tax planning purposes. It provides a way for high-earning individuals and families to reduce their taxes as well as their contribution to public services that build equity and fairness into the economy.

This tax policy is one among many factors contributing to income and wealth inequality in Canada. It is also undermining fiscal health and the government’s ability to pay for the services Canadians benefit from.

[i] Provincial tax savings are calculated based on the weighted average provincial small business tax rate and the federal business limit.