Should an Ontario university degree be a debt sentence?

Right now, post-secondary students across Ontario are finishing up their studies for the year and heading off to summer jobs - if they have been lucky enough to land one.

New research from the CCPA demonstrates just how difficult it is to save up for tuition fees every year. 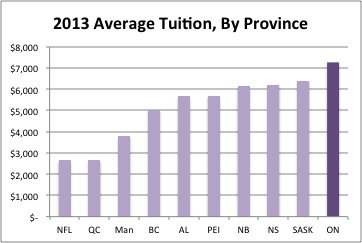 Not only is Ontario tuition the highest in the country, students across the country, Ontario included, must work far longer to pay tuition than students did in the past.

Students attending a post secondary institution in Ontario in the 1972-73 school year would have had to work 359 hours at a minimum wage job to pay for their tuition – that’s less than 9 weeks. That left students with a few weeks to earn money to pay for living expenses and incidentals during the school year.

That means that students have to work the entire summer (18 weeks of full-time work) just to pay tuition. In other words, at minimum wage they can’t possibly earn enough to pay for food, rent, books or extracurricular activities, let alone earning enough money to pay for living expenses they may need to incur while they are working during the summer. 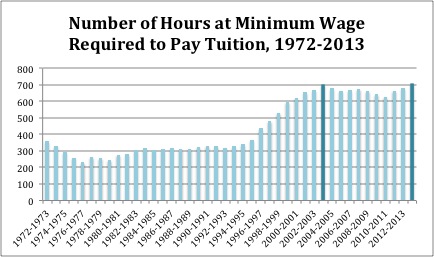 It’s a dramatic change that took hold in the mid 90’s when the average number of minimum wage hours needed to pay tuition increased dramatically – as a result of both a frozen minimum wage and rapidly rising tuition fees.

Taken together, it paints a pretty grim picture for Ontario’s young people. High unemployment and high tuition fees combined are saddling graduates with growing levels of student debt that make it difficult to take life’s next steps including purchasing a home, starting a family or even simply moving out on one’s own. It’s a looming crisis that continues to mount with no signs of relief.