It isn't easy being a Minister of Finance.

Especially when your starting point is: we want to meet the zero deficit target we set 5 years ago,[i] despite slower economic growth and slower growth in revenues than anticipated.

But today Finance Minister Sousa pulled a rabbit out of the hat with the announcement that the 2015-16 deficit will be $1 billion lower than forecast in the budget.

It was because the sale of Hydro One shares is padding the bottom line.

The improvement in the bottom line relies on $1 billion in special payments from Hydro One, including $800 million in a special dividend paid prior to the IPO, and $200 million in additional payments in lieu of taxes to the Ontario Electricity Financial Corporation.

What looks like good news today is simply putting off financial pain into the future: as the Financial Accountability Office has said, that sale will be of short-term benefit and will harm government finances in the longer term.

We’ve written about why the Hydro One sale is ill-advised.

The sale of Hydro One isn’t the only longer-term pain that is being inflicted by today’s economic update. The Finance Minister has recommitted the government to medium program expenditure growth of less than 1 per cent.

A continuation of the government’s deficit elimination plan means that government spending on public services will continue to fall far behind both inflation and population growth. The chart below makes the point. 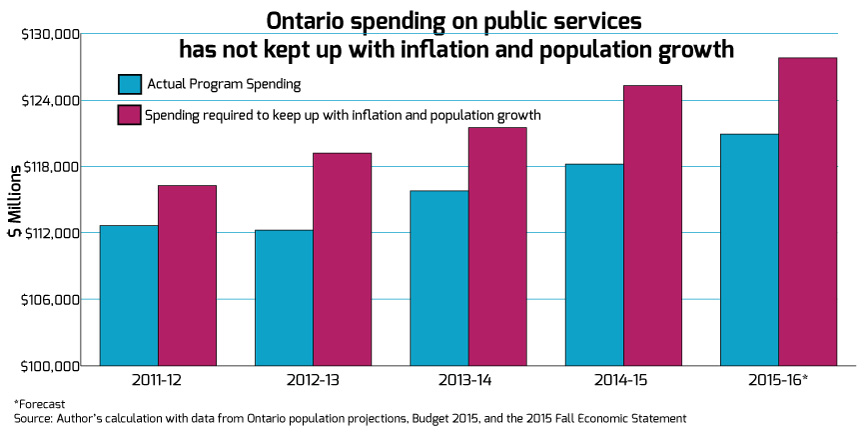 That’s a $6.9 billion gouge in public services that makes itself known through the affordable housing waitlist, the missed targets in the Ontario poverty reduction strategy, and the growing class sizes students and teachers find themselves facing.

Once again, we find ourselves calling for an adult conversation, but this time it is about both taxes and deficits.

It wasn’t supposed to be this way. Premier Kathleen Wynne was elected on the promise to value and protect public services. She was going to be the activist premier. But it’s hard to be an activist if your government is lacking the revenue required to make a difference.

Stretch out the zero deficit target. Given all that has changed since the target was first introduced, it is understandable that it won’t be met. Go ahead, push that target out a couple of years. It’s OK.

Ontario’s borrowing costs are at historic lows and there is continued appetite for Ontario debt from financial markets. There are no indications that we are on the verge of a debt crisis. Pushing back the zero deficit target by a year or two would be a wiser policy choice.

Name and address the elephant in the room

Deal with the revenue problem created by 20 years’ worth of tax cuts. Those tax cuts were politically appealing back when economic growth was in the 4-5% range (those heady days of the late-1990s, early-2000s), rather than the slow growth reality that Ontario is facing.

The tax cut party is over. Ontario lost more than $20 billion this year to the cumulative effect of tax cuts since the 1990s. Now all that’s left is the hangover.

It’s time to look at taking advantage of existing room in key tax revenue streams —corporate and sales taxes. A one percent increase in either would yield billions in additional revenue.

The government has avoided this reality long enough. The unrealistic target recommitted to in the 2015 Fall Economic Statement is the result of that avoidance.

OK, there is one more rabbit to pull out of Ontario’s fiscal hat. At long last, Ontario has a partner in the federal government: there are new commitments to expand and improve public transit as well as aging infrastructure such as roads, water mains, and sewers; to build new affordable housing units and; to negotiate a new health accord. Ontario needs to make some demands on those investments.

But there is room for more. Federal debt-to-GDP ratios are at half the levels now than they were in the 1990s. Federal spending and revenues are at a historic low. This leaves the new federal government the fiscal room to deliver on its promises and more — without compromising fiscal prudence.

The chart below shows just how far behind the federal government has fallen in pulling its weight during the last two most recent recessions and recovery efforts. 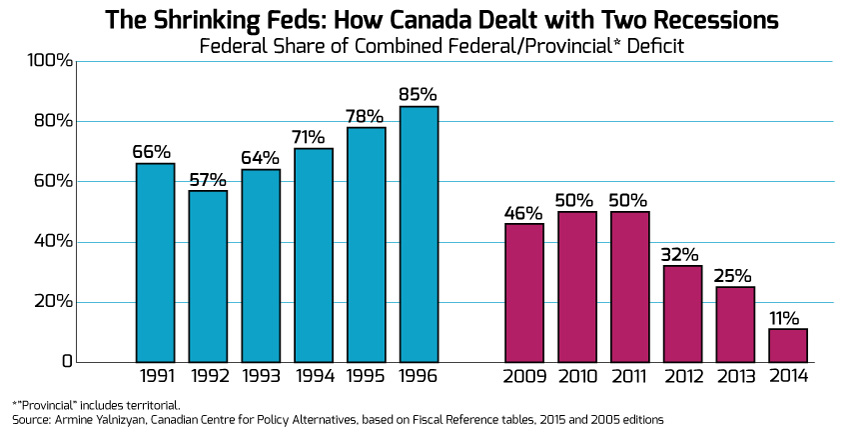 During and after the 1992-93 recession, the federal deficit as a share of the total federal and provincial/territorial deficits was significantly higher than in the years following the 2008-09 recession. Instead of shouldering its share of the recovery, the previous federal government shirked its responsibility and left the provinces to fend for themselves. The new federal government has an opportunity to step up to the plate and help Ontario through to the other side of this fiscal situation.

All three steps — whether taken individually or together — are substantially better options than the status quo, which clearly isn’t working very well.

It’s better than the status quo of selling off more of Hydro One to keep to your deficit timetable.

It’s better than the status quo of staying within the revenue constraints created by the Mike Harris era.

And it’s better than the status quo where public services are being squeezed despite growing demand for more and better public programs.

Premier Wynne’s commitment to leading an activist government won the election in 2014. But it is clear that deficit fixation has thrown this government, and its finance minister, off course.

It isn’t easy being a Minister of Finance, but it’s time to take a look at reality and stare the deficit in the eye.

There are realistic and affordable options at hand.

[i] The commitment to eliminate the deficit by 2017-18 was first made in the 2010 provincial budget.