A few weeks ago, researchers Yanick Labrie, Youcef Msaid, and Alexandre Moreau from the right-wing think tank Institut économique de Montréal (IEDM) published an economic note on the persistence of poverty. The study's first conclusion and the one most prominently displayed by the IEDM (particularly in their media release) is that only 1.5% of people live in poverty for extended periods of time in Canada and that the rate is decreasing.

The second conclusion is that it by following the people who were in the poorest quintile of the population in 1990 and checking these same people's income in 2009, one finds that it's gone from $6,000 up to $44,100, i.e. a 635% increase. Poverty therefore seems to be less of a problem and certainly a less persistent one than we are led to believe. The IEDM has since been hammering that the left-wing mantra according to which the poor are getting poorer and the rich getting richer is nothing but a myth.

I read the study and discussed it in detail with Vivian Labrie (not related to the aforementioned IEDM researcher). She has done a lot of work on poverty in Quebec and pointed me towards a few potential problems with the study. I checked, and she was right.

First problem: who are we talking about?

The statement according to which the people who were poor in 1990 have seen their income increase 635% is based on a 2012 Fraser Institute study. It relies on income tax datasets, which provide very reliable and interesting data. Problem is that the IEDM —by extracting only the conclusions from the Fraser's study to plug into its own— does not share the methodological details mentioned in the original study.

For example, the Fraser Institute chose to remove from its study's population people under the age of 20, but did not remove higher education students (see note 27 on page 35 of the study). The data also excludes people earning less than $1,000 and those who have not filed one of the three income tax returns examined (as mentioned on page 36).

Looking into these methodological details, it becomes plain that people in a very precarious situation (e.g. homeless people) have been excluded from the sample. It's often the case in studies on large populations, but when studying poverty, it's especially problematic. Furthermore, by using income tax, the Fraser Institute only considers individual income and not household income. Hence, a person with both a low income and a rich spouse will be accounted for as being poor.

These particularities are fair game for the Fraser Institute study, since sufficient time is spent explaining both its methods and its sources: we are told what is at stake. In the IEDM study, however, it's more embarrassing. When we are told that "low-income Canadians generally do not remain at the bottom for very long," it's unlikely that the image which springs to mind is that of a university student or of a person with a rich enough spouse to support him or her. Conversely, if it was made clear that the study does not take into account homeless people or others living in very precarious situations, many would likely be surprised to learn that the research claims to study poverty but still leaves them aside.

Furthermore, it's worth noting that Statistics Canada's former chief statistician Michael Wolfson severely criticized the Fraser Institute study, questioning both its methodology and its results. The ending is quite unforgiving: "Life at the top may be risky, but the real risks in life lie at the bottom of the income spectrum. This reality of precarious jobs amongst the poor, and current research standards for unbiased analysis of income mobility, are ignored by the Fraser Institute as it tries to perpetuate the Horatio Alger, ‘rags to riches’ myth."

The Fraser's data is not uninteresting to demonstrate that there is relative mobility between quintiles in Canada, but it's heavily contested and, most importantly, it does not make it possible to draw any conclusions on poverty. Based on its findings, it's certainly impossible to assert emphatically that the poor are not getting poorer and the rich getting richer.

To substantiate its claim according to which only 1.5% of people remain in poverty, the IEDM draws its data from Statistics Canada's Survey of Labour and Income Dynamics (SLID). The study is longitudinal, i.e. it follows individuals for a certain period (six years in this particular cas). It enables us to follow the evolution of their relationship to work. This study makes it possible to check whether the people who were poor at a certain point in time remained so for a long period.

The IEDM examines certain periods during which the survey was conducted and presents us with the following graph: 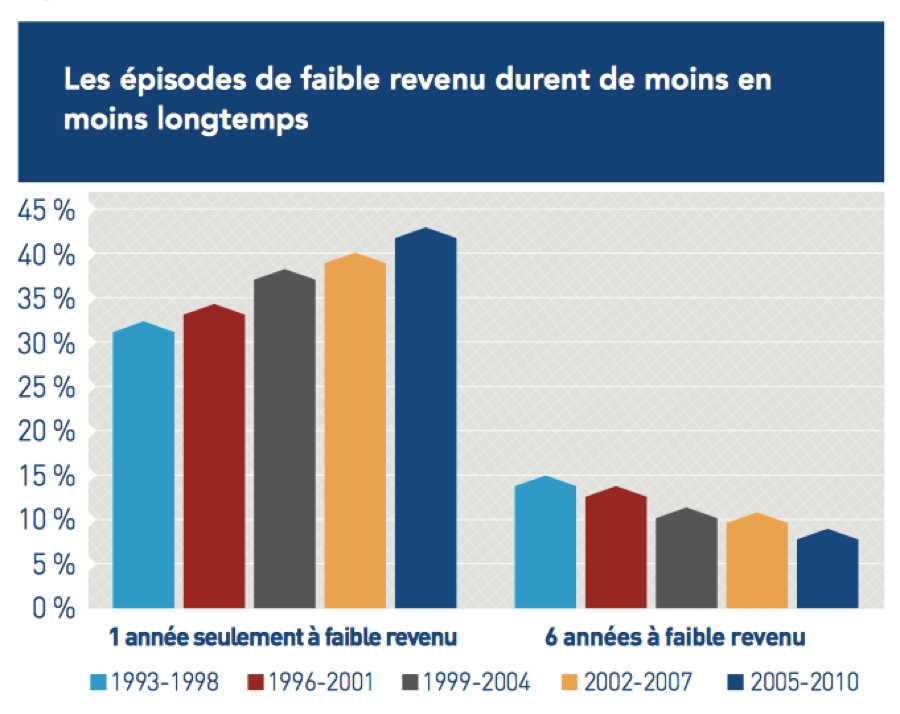 To come to this conclusion, the IEDM chose to check for low income based on after-tax low income cut-offs (LICOs). Let's take a closer look at what this measure takes into account to better understand:

"The after-tax low income cut-off is defined by Statistics Canada on the basis of the household average spending for food, housing and clothing, i.e. 43% of available income. If the share of available income that a household spends on these goods is greater than 20 percentage points above the average (i.e. 63%), it is considered to be low income. This threshold is adjusted in relation to household size and to the cost of living in the specific region inhabited."

Nonetheless, in Canada, there are three different ways of measuring poverty, and Statistics Canada has expressed reservations, as early as 1997 and probably even before, regarding the fact that LICOs should be considered as a measure of poverty. Why? Because the methodology includes a number of problems, like for instance not taking into account transportation or communication costs. That's actually why there are many other measures of poverty.

However, the dataset used by the IEDM actually makes it possible to measure poverty according to other indicators: the low income measure (LIM, i.e. 50% of the median income) and the Market Basket Measure (MBM, based on the basic needs that must be met to survive). The first measure is the one most used in international comparisons. As Mario Jodoin has mentioned, none of these methods is perfect, but it's by taking stock of many of them that we get a more complete picture of the situation of poverty.

Since the MBM is not available for as long a period as LICOs are, it is understandable that the IEDM refrained from using it. Nonetheless, the LIM is available over a 6-year period, just like LICOs. Then why not use it? Why didn't the IEDM offer up both data sets? Let's prepare the same graphs with the after-tax LIM.

The result is much less telling, because there's a relative stagnation in both cases, both for people who have spent a single year on low income and for those who spent six.

Over the two periods (2002-2007 and 2005-2010) for which we have data for the other measure, the MBM, it's the same inconclusive result. On the one hand, there is an increase in people who did not reach the MBM for a single year, but the number of people who stayed more than six years under that bar is stagnating.

In short, in its study, the IEDM has chosen to set aside a certain number of facts that would have greatly nuanced, even contradicted, its claims. In the light of this new data, it's more difficult to draw the conclusions that the IEDM enunciates with such certainty. It is even harder to claim that the poor are not getting poorer in the face of this data only. In fact, there is no data in this study that supports the claim. In contrast, there is a wealth of data which demonstrates exactly the contrary in Quebec, in Canada and in the world.